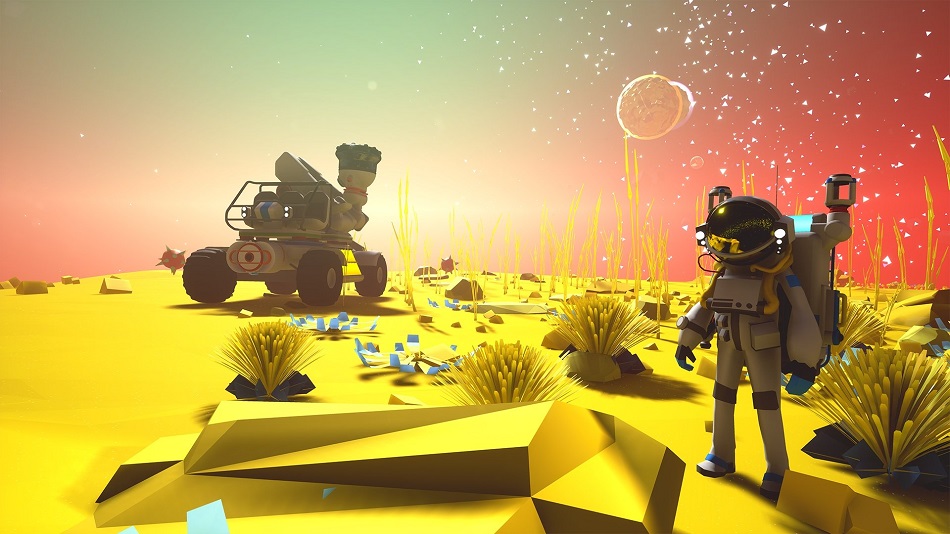 LOW The experience is fairly buggy.

WTF All this space age tech, and no simple method to descend into caverns.

Some people call it the final frontier, and that’s true for the bunch of astronauts I’ve spent time with while playing the fresh-out-of-Early-Access interplanetary exploration game Astroneer.

Astroneer is a third-person open-world exploration and crafting game, but one that doesn’t offer much in the way of story. Essentially, the player controls an astronaut and is heads off into the cosmos to search for planets filled with stuff for mankind to claim dominion over — our little spacedude is handy at fabricating new equipment as long as he can find the various resources required to craft it.

Generally this is done by sucking up raw materials through a space vacuum the Astroneers carry around. Later, once a home base gets established, it’s possible to start smelting materials or employing other methods of refinement to get new types of supplies. The whole shebang will need adequate power, so players may wish to take advantage of solar or wind power, and… well, it starts getting fairly involved, including routing cables and stuffing them into power sockets, which is surprisingly enjoyable given how much of a pain doing it in real life can be. 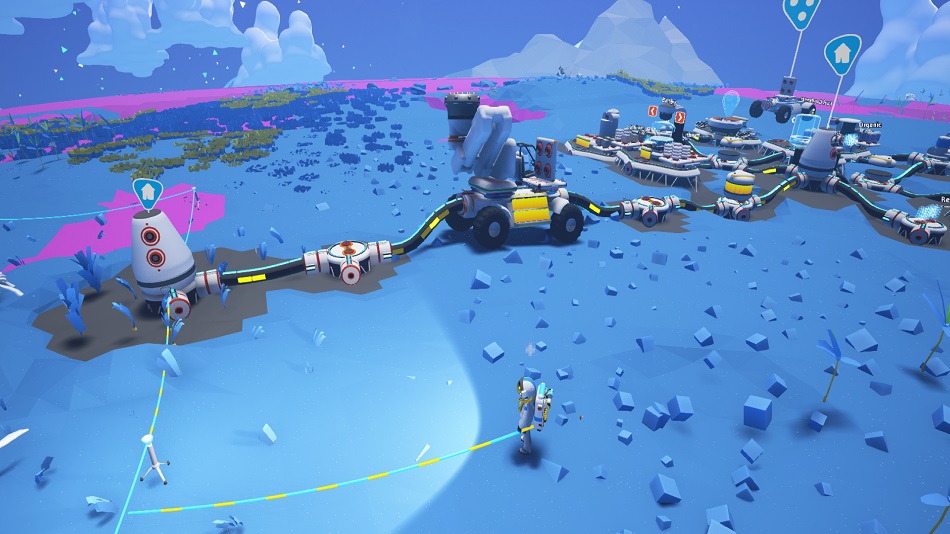 Eventually, all of the supplies nearby will be exhausted, so heading off into the unknown in search of more is a requirement. While there’s no real danger from wildlife apart from the multitudes of killer plants on each planet, oxygen and fall damage are real concerns, especially when first starting out. Without spoiling too much about the mechanics of establishing a home base – the sense of discovery is one of the game’s strongest assets, after all – it’s soon possible to branch out for miles in any direction with a steady supply of oxygen and ways to travel without keeling over miles from home.

What’s more, Astroneers are able to terraform the world at will. Sucking up dirt through their vacuum and then planting it back down or simply smoothing out surfaces to make them useful for building is a breeze, though occasionally creating functional ramps or tunnels can be more awkward than expected. The geometry can warp and deform in some pretty unexpected ways, thwarting efforts to carve out new areas to explore or set up shop in.

As a co-op enabled title, Astroneer is a significantly better experience when exploring with a pal, working towards a common goal like busy little Astrobees. Heading off down mineshafts, bringing resources back to home base or even just collaborating to discover how things actually work is a much better experience in co-op — as is hearing them tumble to their death down a mineshaft or switching off their oxygen supply when they’re miles from safety. Fantastic times, guaranteed.

However, after a honeymoon period of relaxing exploration and experimentation, flaws start to become noticeable. For example, it can take forever to find certain necessary resources — a problem exacerbated by procedural creation of planets when starting a new game. I also found heading down into caves to be unnecessarily tricky, with huge drops appearing out of nowhere, or my burrowing often interrupted by huge underground caverns. I’d have sold my soul for a simple rope ladder to dangle from ledges at times. 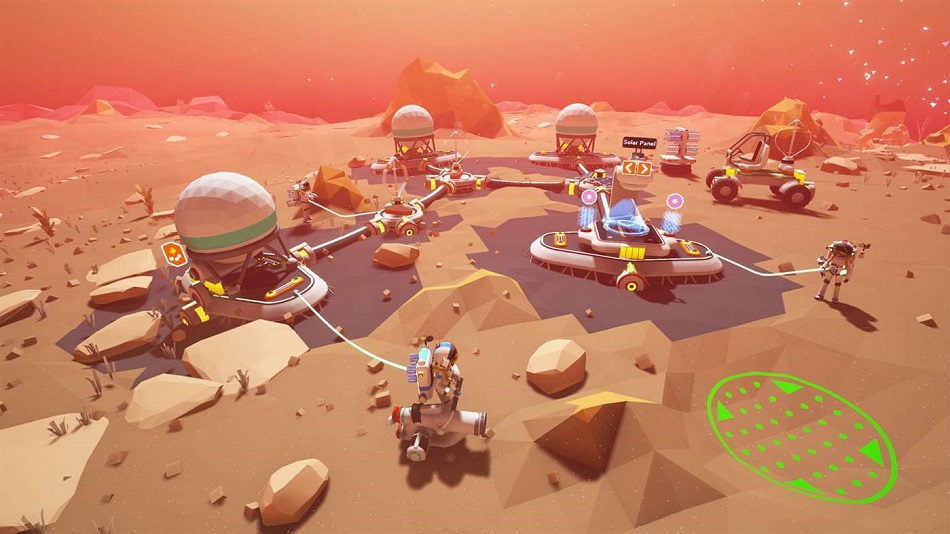 Along similar lines, there aren’t many ways to die in the game, but when it happens, it totally sucks. Suffocation, fall damage, flying debris and hostile plants are generally easy to survive by carefully planning excursions, but when something goes sideways, the player loses everything that’s on the character.  While this stuff can be recovered by revisiting the site of death, it can be incredibly difficult to navigate back to the corpse, especially in the early days when there are few resources in reserve to outfit a replacement explorer.

In a more technical sense, even though the game’s now out of Early Access, there are still a number of bugs that need attention. It crashed on me a few times without saving, and one time when I was spelunking in some tight caverns, I suddenly found myself shooting wildly off into the air, ramming through solid rock and splattering against the surface far above. I lost a lot of good equipment for no good reason, then turned the game off in a huff. The next time I played, the exact thing happened again in record time, so it’s clearly more than an isolated incident.

What finally stopped my budding space career wasn’t related to boredom or glitches though. After playing for about twenty hours, visiting every planet and getting ready to tackle the final late-game mysteries, the game simply stopped loading. It would continually freeze and then lock my entire system up after a short while, necessitating a hard reboot by cutting the power to my PC.

Astroneer‘s a neat little game full of  little quirks and things to discover, but near the end of my time with it I was definitely starting to burn out on the loop of creating equipment on one planet before blasting off into space, landing in new, harsher environment, and starting from scratch once more. Grab an Astropeer and a couple of Astrobeers and this title could easily provide a few evenings’ worth of entertainment. Beyond that, the numerous bugs and repetition of the core experience make it a less appealing prospect. Rating: 5 out of 10

Disclosures: This game is developed and published by System Era Softworks. It is currently available on Xbox One and PC. This copy of the game was obtained via publisher and reviewed on the PC. Approximately 16 hours of play were devoted to the single-player mode, and the game was not completed due to system lockups. While it seems very open ended, there is apparently an endgame goal which I was unable to get to. 5 hours of play were spent in multiplayer modes.

Parents: According to the ESRB, this game is rated Everyone and contains Mild Fantasy Violence. It’s safe for kids, and teaches them the importance of oxygen and not falling five hundred feet to their deaths too!

Deaf & Hard of Hearing Gamers: Plant based enemies will take more observation to spot due to not being able to hear their attack cues, but for most important moments there are onscreen cues – an oxygen icon will appear above the player’s character when running out of air, for instance. 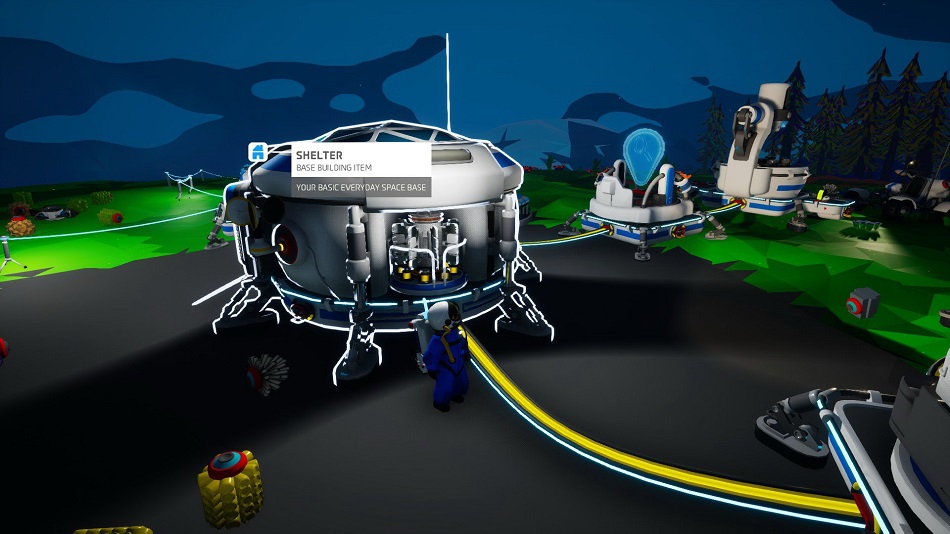 Remappable Controls: Yes, this game offers fully remappable controls for keyboard and mouse. Controller users are given significantly less options, as seen below. 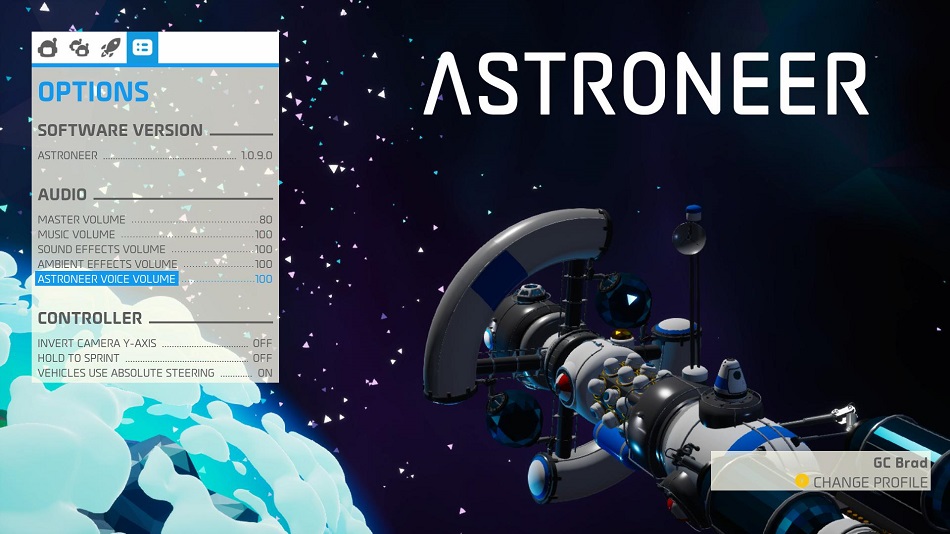 Nice bio! If only someone would’ve taught me the value of oxygen at an early age…

Astroneer needs to have a sequel.

So this one also uses Unreal Engine 4 and has a multiplayer aspect?