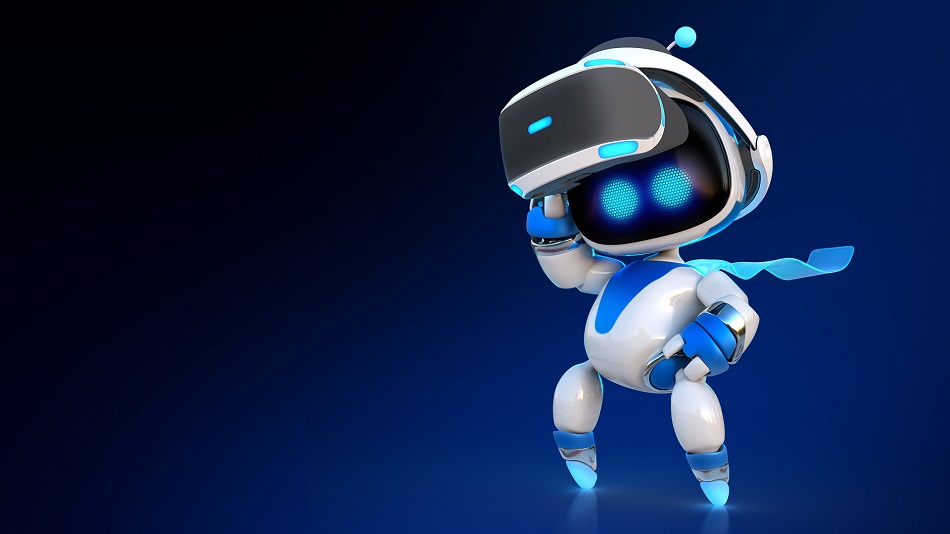 HIGH It’s absolutely stuffed with one high after another.

LOW Having to swivel my head like an owl to look behind me.

WTF I’m not usually ‘into’ platformers, but this absolutely blew me away.

Astro Bot: Rescue Mission is absolutely amazing. I suggest that anyone remotely interested stop looking at this review now and buy it without taking time to read why they should — in order to justify my love for this game, I’m going to have spoil a thing or two, and that’s a shame because it absolutely deserves to be played with as little foreknowledge as possible.

The story’s minimal – a rampaging space alien has destroyed Astro’s ship, stolen its VR helmet and scattered the crew to the solar winds, so it’s up to Astro (and the player) to get them back safe and sound. By the way, when I say ‘the player’, I mean exactly that — the player in real life wearing the headset is a key part of Astro Bot.

The integration of VR here is second to none. From the moment it begins, the sense of immersion is incredible. The secret seems to be that Astro Bot offers up many of the best thrill-ride elements of other VR titles layered over (and, indeed, perfectly woven into) an exceptionally charming and wonderfully-realized platformer. 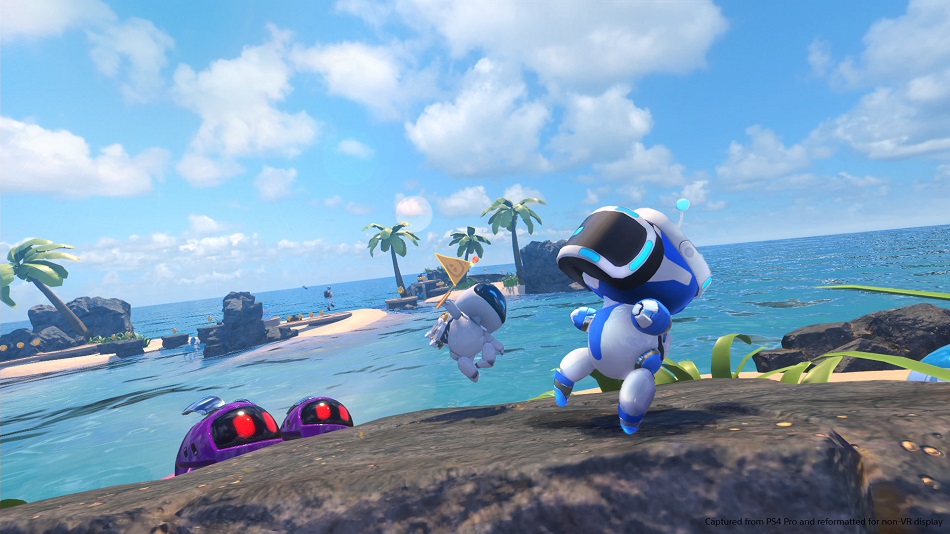 In a meta sense, it does an astounding job of making the player feel less like an observer and more like an active participant in world through a combination of graphical effects and simple puzzles that make perfect, intuitive sense from start to finish. It’s not every day players get to become a huge floating robot helping out a tinier, punchier robot on a quest to rescue his friends, after all.

For instance, certain enemies and objects can briefly obscure the player’s vision by shattering the camera, spitting goo all over the visor or even clinging to it in the middle of a boss fight. Likewise, the player can headbutt certain adversaries to help Astro overcome them, or likewise topple objects into becoming impromptu pathways that our hero can run along in order access various areas. Even the simplest physical act of peering around a corner to scout for enemies or locate missing crew members makes the world feel more alive and present than it otherwise would.

Of course, all of that wouldn’t amount to a hill of beans if it didn’t have gameplay chops, but it does, and then some.

Astro has a relatively limited moveset with a punch, a thruster jump and a spinning attack, but the player can also pick up new items between each level to shake things up. A water cannon may fill up pools so that Astro can reach higher platforms or douse flames in his way, a gatling cannon can mow down an onslaught of enemies, and a hook can be used to create tightropes between ledges or rip massive holes out of the environment. There’s always more than enough going on at any given moment to keep players entertained, and how it all affects gameplay is a constant delight that shows real imagination and skill on the part of the developers. 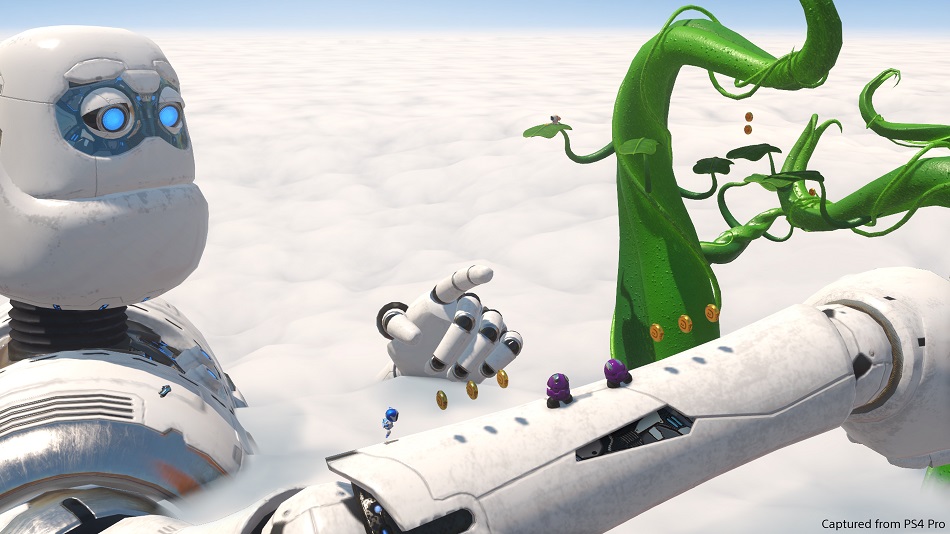 Visually, Astro Bot avoids the low-resolution look so common to other PSVR titles. Everything is sharp, the water effects are stunning, and it has an insane amount of personality. Case in point – during one section Astro wound up stuck on a spinning platform, running for his life as fast as his little legs would carry him. I looked up to check how much of a jump he needed to take and the adorable little bastard looked me in the eyes, squealed delightedly and waved! He’s literally seconds from death, and still able to mentally shunt his impending mortality off to the side just to give me a big cheerful wave. He’s the freaking best.

Special mention must also go to the soundtrack. It’s rare for me to go bananas over a game’s OST but the one found in Astro Bot is absolute freaking fire, complementing each stage perfectly whether it’s set miles above the clouds or roaming through dark, spike filled caverns.

In fact, everything is nailed so perfectly that there are only a few things I can knock it for. One is the fact that it isn’t designed for fixed seating. Players will occasionally be expected to look behind them to spot hidden secrets and the like – a swivel chair in real life would have made this much easier, or perhaps adding the ability to rotate the world with the right analog stick.The second issue is fairly minor, but Astro can occasionally bug out and be swallowed up by moving parts of the environment. I had to restart a stage a couple of times after he wound up trapped inside objects with no way of killing him off to restart a checkpoint.

…And that’s it. Those two things are the entirety of my complaints, and everything else had me in a constant state of glee from its triumphant start to a showdown with a final boss that’s so effortlessly stunning that the designer deserves a Knighthood for creating it. Frankly, if Astro Bot isn’t my favorite game this year, I’ll not only eat my hat, I’ll roam the lands eating every hat I come into contact with — it’s that damn good, and the definitive argument for owning a PSVR headset. Rating: 9.5 out of 10

Disclosures: This game is developed by JapanStudio and published by Sony Interactive Entertainment. It is currently available on Playstation 4. This copy of the game was obtained via retail store and reviewed on the PS4 Pro. Approximately 18 hours of play were devoted to the single-player mode, and the game was completed with all crew mates saved and the Platinum Trophy achieved. There are no multiplayer modes.

Parents: According to the ESRB, this game is rated Everyone and contains Crude Humor and Fantasy Violence. There’s nothing in this game that could offend anyone in their right minds — it’s delightful and good-humored from start to finish. I mean, there are some cartoonish skeleton bots littered around that could frighten the particularly unstable, but that’s it.

Deaf & Hard of Hearing Gamers: There’s no dialogue in the game and therefore no real need for subtitles. That said, there is one obvious issue though – whilst traversing each stage, stranded crew members will squeal for help to alert players to their offscreen presence in order to help locate them. As far as I could tell, there’s no visual or menu clues that can be toggled on to afford deaf players the same convenience. Aside from that, the usual VR issues apply – many audio cues warn of impending attacks, and since the player can look away from enemies and other dangers, this may cause some issues.

Remappable Controls: No, this game’s controls are not remappable. Left analog stick moves Astro, X button jumps, a double-tap ignites his thrusters, square punches. It’s traditional as far as Astro is concerned, though the player also has to maneuver their body to interact in the VR space, and use the touchpad to deploy items. 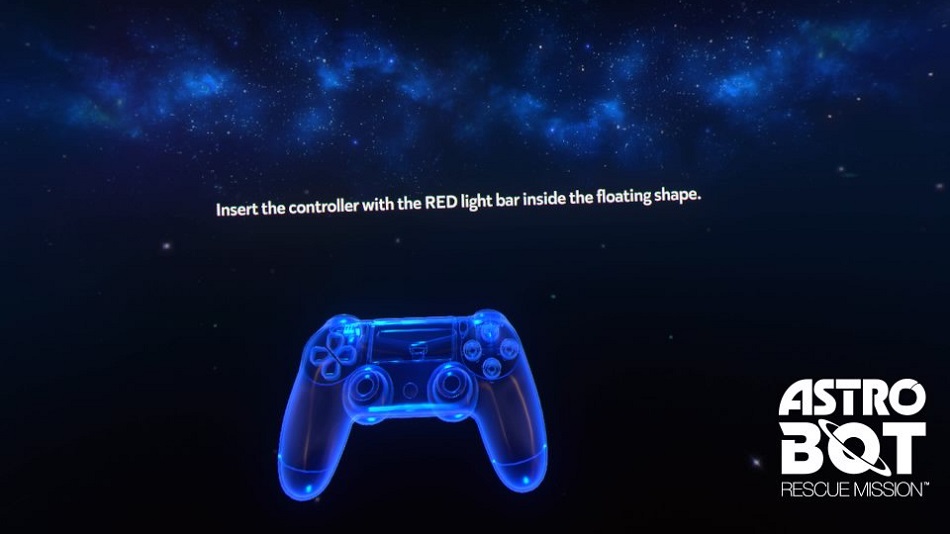