We are all made of blood 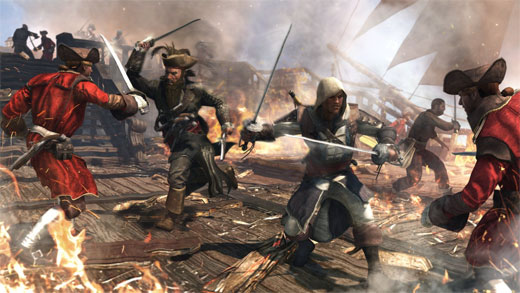 HIGH Cresting the waves in a storm whilst laying siege to a fortress with mortar fire. Arrrrr!

LOW Pointlessly tailing some cretin across the map for the billionth time.

WTF I spotted that revelation about Captain Kidd right off the bat. How could Kenway possibly fail to see it?

After the intensely disappointing Assassin’s Creed III, it seems like Ubisoft went back to the drawing board and had a little think about how to make the series appealing to its fanbase once more. The answer was obvious, really – just drop some pirates into the mix and let everyone start stabbing people on the high seas with those famous hidden blades!

As a result, this time around it’s all about the fearsome pirate Captain Edward Kenway and his quest to obtain mounds upon mounds of illicit booty. Rubbing shoulders with the likes of Blackbeard and Captain Kidd, he’s a less heroic sort than previous protagonists were—and given that they’ve generally been a line of unrepentant murderers from start to finish, this is quite an impressive feat. One of his first acts under player control is murdering an Assassin and pilfering his clothes. That’s okay though—it turns out that he was a bad Assassin who was about to join the Templarzzzzzz…

The story behind Edward’s rise to piratical infamy isn’t exactly riveting, nor is the modern day stuff about an anonymous Abstergo employee taking over from Desmond Miles’ original saga. The less said about that, the better. Otherwise, the sneaking and stealth mechanics are as good as they’ve ever been—so they’re still mediocre at best, and that’s being generous.

Sneaking past several groups of guards would be fine, but Black Flag

constantly expects players to ghost through entire battalions of dim-witted sentries who all love standing with their backs to dense shrubbery. It quickly becomes tedious in the extreme, and any time stealth was optional rather than a requirement, I ended up with mountains of corpses left in my wake. The alternative was too mind-numbingly tedious to consider, so killing them all was the only sane choice.

Combat’s also largely unchanged, making it simpler to massacre every human being in a mile-wide radius than slip by them undetected. Countering enemy attacks for instant kills and initiating kill chains to chop multiple foes down carries the day, and has the knock-on effect of making any story scene where Kenway is overpowered curiously unbelievable.

Assisting in his daily murder, the usual upgrades and unlocks are available—pistols for shooting distant snipers, sleeping darts for dropping awkwardly placed guards, and armor enhancements so that unfriendly blades don’t slip through to important arteries during battle. There’s also a crafting system lifted right out of Far Cry 3 where hunting predatory wildlife can be put to good use making outfits or improving equipment.

Most of the other traditional Assassin’s Creed systems are present and accounted for. Tailing suspects makes its unwanted return, and far too many of the storyline missions involve meekly following behind two gossiping bell-ends while avoiding or mutilating guards along the way. Synchronizing viewpoints is still a thing, despite having worn out its welcome sometime around Assassin’s Creed II. Rather than being a series of exciting ascents, it’s just jumping through hoops to unlock a decent map.

Of course, some of the good stuff is back, too. Free running remains a decent way to navigate the pretty landscapes. Sadly, even after all these sequels it's still not totally reliable—sometimes Kenway will refuse to clamber onto a perfectly good ledge while racing against the clock, but it’s largely still a (mostly) enjoyable way to get around when it’s not awkwardly screwing up chase sequences.

However, putting all the traditional stuff aside, it's clear that what Assassin’s Creed IV: Black Flag does best is the new piracy aspect. It works pretty great in practice and sailing around the islands of the game's world is magnificent to behold. There’s a day and night cycle that looks great, volumetric fog obscures distant vessels, and an involved weather system that chucks squalls and tornadoes at players which impact the ship’s control. Fighting off an enemy armada or laying siege to a military fortress in the middle of a ferocious downpour can be stunning to behold, and the way the waves ebb and swell… well, it adds a surprising amount to the experience.

What’s more, there’s a decent amount of depth to upgrading and customizing Kenway’s ship, the Jackdaw. It starts out so weak that a couple of gunboats and a stiff breeze could tear it in half, but put some love and care into it and it’ll destroy ships twice its size without breaking a sweat. There are even some 'Legendary Ships' to take down, and they aren’t a joke even for a fully upgraded ship—they basically ignore the laws of physics and even reality in their efforts to put Kenway in the drink.

is the freshest and most interesting Assassin’s Creed experience in a very long time simply by virtue of having such excellent sailing, weather and pirating systems tucked under its belt. Ironically enough for a game which centers around the concept of genetic ancestry, however, it continually lets itself down by refusing to break away from its own tired and worn-out heritage. The piracy stuff can stay, but as for the more traditional Assassin’s Creed aspects… well, let’s hope someone silently slits their throats while nobody’s looking so that the new elements on offer here can flourish. 6 out of 10


Disclosures: This game was obtained via retail store and reviewed on the PC. Approximately 30 hours of play was devoted to single-player modes (completed 1 time) and 2 hours of play in multiplayer modes.

Parents: According to the ESRB, this game contains blood, sexual themes, strong language, use of alcohol and violence. It's a game about stabbing people to death and plundering their goods – needless to say, it's not child-friendly.

Deaf & Hard of Hearing: Following the story shouldn't be too much of an issue with the subtitles available, though there's a number of audio cues that are only partially offset by visual ones. It's not going to be unplayable by any means, but will require keener observation. This is even more true in multiplayer matches, where hard of hearing players will likely be at a real disadvantage.