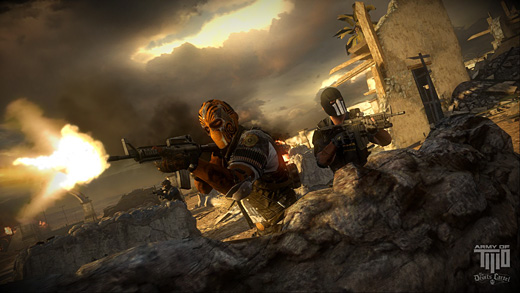 LOW An utter lack of excitement from start to finish.

WTF The Devil doesn't even make an appearance in this game. Liars!

Interestingly, the Army of Two franchise has a lot of apathy and disgust leveled at it despite two reasonably solid games to date. Sure, they weren't exactly spectacular showcases of everything that's great about modern gaming, but they had their moments. With Army of Two: The Devil's Cartel

however, EA are determined to finally deliver an experience that lives down to those rock bottom expectations—and they succeed in blistering style. Hooray!

The plot's barely worth mentioning. Two new cretins who aren't fit to lick the crap-covered soles of Rios and Salem's boots take on a ruthless drug cartel in Mexico after a mission to protect a political figure goes awry, and he ends up kidnapped on their watch. The two previous protagonists are largely out of the picture—Rios now heads up the TWO organization providing security for said politician, whilst Salem died off-camera a few years back in the most hilariously inept and uncharacteristic fashion imaginable.

So how about these fresh new faces brought in to replace them? Well, the new heroes headlining The Devil's Cartel are the blandest protagonists anyone could hope to ask for. These rampantly boring po-faced bumbags weren't even deemed worthy of being given their own names. Alpha and Bravo? They might as well be called Player 1 and Player 2. Or Prick A and Prick B, come to think of it.

As for the game itself, Visceral's gone in with a machete and clumsily hacked nearly everything that set the previous games apart from other shooters out of the equation. Back to back assault sequences? Gone. Moral choices? Gone. Silly brofisting after massacreing dozens upon dozens of enemies? Gone. Faking surrender? Gone. The aggro system? If it hasn't been removed (and I'm not convinced that it hasn't) it's reduced to a fraction of what it once was. In many ways, The Devil's Cartel comes across as a concentrated effort to produce the most banal shooter ever made. In fact, it succeeds so spectacularly that it takes the very "b" out of "banal."

Offsetting all these omissions by a factor of zero is the game's new "Overkill" mode—fill up a rage meter while playing, trigger it, and the very fabric of reality will shift to accommodate our heroes' desire to kill everything in sight. Their guns get beefed up with supercharged infinite ammo to the point where they can blow chunks out of buildings, they're unable to die, and if both players activate the mode at the same time the effect is strengthened. Sounds great, but after the first batch of enemies have been gunned down, Alpha and Bravo are almost guaranteed to be running around pointlessly as the Overkill timer slowly expires just in time for reinforcements to arrive. It nearly always feels like a total waste of the meter. 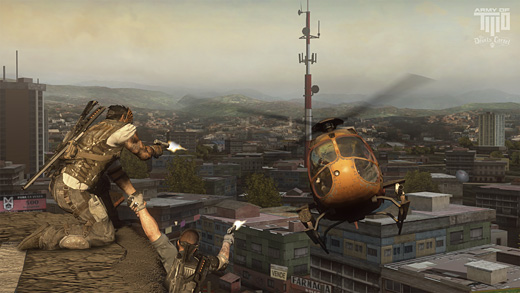 All of this would be forgivable if the game was fun to play. Well, quelle surprise, it's really not.

Weapons feel weak and ineffectual, the cover system is often unnecessarily awkward, and our rocking heroes haven't the faintest clue how to roll away from danger when necessary—for example, those trying moments when a grenade plops down at their feet and the tanklike controls almost guarantee suffering a chunk of splash damage.

Enemies are of the usual brainless, suicidal variety and are utterly unsatisfying to fight. Occasionally a brute will enter the picture, with the interesting and unexplained ability to soak up a bunch of machine gun rounds in the face before expiring. Before the game is over, hundreds if not thousands of these goons will have met their end—which is why it's such a shame that fighting them is less enjoyable than accidentally stepping on a thumbtack after hopping out of bed first thing in the morning.

Compounding the core lack of excitement are a lot of weird design elements—another player joining in online will necessitate a restart of the level, chapters begin and end in some truly strange places (such as seconds after loading in a new section) and numerous other issues that underline the lack of thought that went into this game. At least the AI partner provided isn't a complete idiot, which is something.

The experience as a whole reached its nadir for me during a section where El Diablo, the mysterious, impossible-to-guess-at-his-identity antagonist is taunting our two heroes during an incredibly inept chase sequence. By chance I'd triggered Overkill just as he popped his gurning head out of hiding right beside me, and I ended up putting enough lead into his slowly retreating back to level a small continent. Naturally, it had no effect whatsoever despite the geysers of blood gushing out of him.

The mere mention that Devil's Cartel is running on the same engine that powers Battlefield 3 could also fool some people into thinking that the game would at least be a bit of a looker. Not one bit. It's generally half a step away from being absolutely hideous at all times—though it's somewhat appropriate that The Devil's Cartel is running on Frostbite 2, as only an artist with severe frostbite in their eyes could create environments as unrepentantly, unremittingly ugly as these.

In the end, Army of Two: The Devil's Cartel

is a boring, meatheaded slog through about ten or so hours of predictable situations and sub par dialogue, and if someone told me that the development team had simply been handed a bit of cardboard with the words "sink this series" emblazoned across it as a design document, I'd believe it without hesitation. As likely to irritate previous fans of the series as bore newcomers into a coma, there's very little reason to recommend The Devil's Cartel over the hundreds of shooters on the market that outclass it in every way that matters—including the two previous games in the franchise. Rating: 3.5 out of 10.


Disclosures: This game was obtained via rental and reviewed on the Xbox 360. Approximately eight hours of play were devoted to the single-player mode, and the game was completed. One hour of play was spent in multiplayer modes.

Parents: According to the ESRB, this game contains blood and gore, drug reference, intense violence, and strong language. Don't let your kids play something like this—not because of the violence, gore and swearing, just because it's awful in nearly every way. Give them something like Ninja Gaiden II instead—they may still grow up twisted, but at least they'll thank you for it.

Deaf & Hard of Hearing: Some ambient battlefield information may be missed such as enemies shouting out their intentions, but other than that there's little to be concerned about.

I think I do remember that actually but as I listen to the podcast at 5 in the morning whilst driving I may also have purged it from my memory (plus im not a raging fallout fan).

About 2 days before this review got put up I downloaded “the devils cartel” demo and gave it a try with my girlfriend and was immediately struck by the boring shooting and lack of features you pointed out in the review.

Just to let you know that I actually have been on one of the podcasts to date – there’s a Fallout special I ended up recording with the usual GameCritics crew at 3AM whilst hopped up on caffeine tablets.

I’m pretty sure it was good fun, even though my mind’s deleted the entire escapade in a desperate bid to protect itself. That’s always a good sign, right?

love it when you review games on here Mr Forman, excellent. Try and get on the podcast!