Is Nofun: Tribute to a Visual Hovel 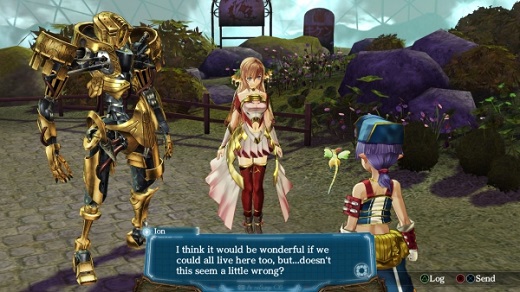 WTF An empress. In public. With a visible butt crack.

Ar Nosurge is a curious beast. From the outside it gives the impression that it's a vast, sprawling space opera with an expansive world to explore, but this isn't the case at all. It's actually one of the most restrictive titles in recent memory, and nearly every aspect comes up short in one area or another, from nonsensical character interaction to the wafer-thin battle system. Given that it comes from the same studio behind the excellent Atelier series, it's fair to say that Ar NoSurge is a colossal disappointment.

The setup is pretty standard 'end of the world' fare, though in this instance the world is a giant vessel floating through space, searching for a planet that can sustain the life of its inhabitants after they accidentally destroyed the previous one. The antagonist wants to go home, even if it winds up killing everyone aboard the ship. It's not a bad setup, actually. It's just unfortunate that everyone involved is an insufferable idiot.

Many of the conversations revolve around friendship, love and the human condition—which is why it's a shame that nobody acts or talks even remotely like a normal human being would in a similar situation. Rather than appearing to be ‘endearing anime personality quirks', these dialogues seem closer to ‘serious undiagnosed mental issues', and they wear thin pretty bloody fast. From repeated domestic abuse (to show she cares!) to godawful innuendo that rarely rises above the level of 'small boobs LOL', it's immensely tough to get invested in these cretins' lives.

On top of these annoying characters, Ar Nosurge is exceedingly verbose, more akin to a visual novel than a standard JRPG, and given the inferior translation coupled with its tendency to rely heavily on near-impenetrable terminology and lore from its own (unlocalized) series, it wouldn't surprise me if many simply lost interest while playing. When I saw a woman refer to herself as an old man about half an hour into the game, it became clear that more quality checks wouldn't have gone amiss.

Weirder still is that talking to some NPCs causes them to launch into what seems like two entirely different conversations at the same time, leading me to believe that dialogue is often delivered in the wrong order or attached to the wrong characters. This was fixed in a recent patch so it's no longer an issue, but during my initial playthrough I frequently questioned whether I was drunk or not, as I couldn't understand what the hell they were talking about.

While it isn't all doom and gloom thanks to a few decent jokes and touching moments buried amongst mediocre reams of text, Ar Norsurge greatly suffers from a lack of focus. Diversity can be a welcome thing, but in this case the gameplay systems come across as undercooked throwaways added simply for the sake of it, adding nothing to the overall experience.

The battles are awful, mind-numbingly simplistic affairs where repeatedly tapping buttons to wipe out anyone with an exclamation mark above them is the order of the day. There are few enemy types to battle against, with several obvious reskins cropping up over the course of the adventure. However, I will say that the ability to wipe out every enemy in an area via a song is a nice touch. Unfortunately, it's done by tapping the attack button until boredom threatens to physically seep from the screen and suffocate everyone nearby, over and over and over again.

Also, the exploration is disappointingly shallow. The environments are small and tightly enclosed, with the same handful of tiny areas being revisited over and over during Ar Nosurge's runtime. Couple this with the near-pointless battle system, and it's surprising that Gust didn't simply cut them both out completely and craft the game into a straight-up visual novel.

Another problem with relying so heavily on story is that only two characters end up being remotely appealing—Kanon and Ion. The rest of the slackjaws encountered throughout could wind up being bulldozed into a ditch in a shockingly violent and unexpected endgame twist for all I care.

Ar Nosurge is a highly disappointing game, no two ways about it. This may be partly due to my own sky-high expectations, but it simply doesn't offer an engaging or interesting experience. It doesn't disappoint just because it fails to live up to the studio's legacy, but it also disappoints because it just isn't any damn good. Rating: 3 out of 10


Disclosures: This game was obtained via publisher and reviewed on the PS3. Approximately 40 hours of play was devoted to single-player modes (completed 1 times) and there are no multiplayer modes.

Parents: According to the ESRB, this game contains: alcohol and tobacco reference, fantasy violence, language, partial nudity and suggestive themes. There's nothing excessively offensive, though the bathing scenes and limp, flaccid attempts at innuendo may be offputting. Mainly due to how uninspired they are.

Deaf & Hard of Hearing: Few issues here; there's a dual audio option and therefore everything is subtitled—though there were sections during cinematics where subtitles were strangely absent during dialogue.

Anonymous – the story literally looks like something ripped straight out of a Visual Novel written by a bunch of High School boys who watch way too much Anime. The battle system is ok but nothing amazing, the story is your typical friendship and junk that’s in every JRPG out there.

Are you saying he couldn’t possibly of read the text then criticise them . The dialogue is not high art, he’ll it’s not even low art. It’s mind bogglingly poor. I actually read through 4 hours of synthesis dialogue that seems like it’s meant to be funny only someone forgot every single rule of comedy in existence. It might have been comedic gold before it was translated in bad English it’s very hard to tell. I love anime, I love space operas , I can get behind wordy games but this seems to have been written by a team of… Read more »

A good case of a tl;dr review from someone who pretty much didn’t read any of the texts. To say the story is nonsensical, that the lore is impenetrable, that the focus is solely on friendship and love, and that the characters are idiots that know nothing about what they’re doing and that they don’t act like actual people is a good demonstration of this.