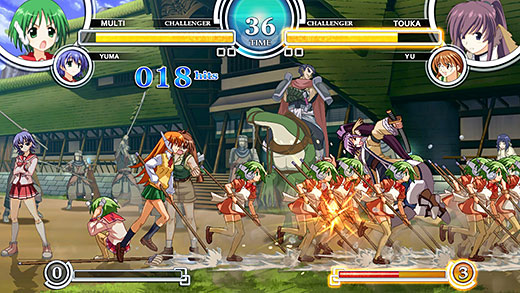 WTF An interdimensional clash of titans resulting from the search for ‘hot guys’?

is… a little bit crazy.

As a fighting game from the developers behind the little-known Arcana Heart series, it features a roster of characters most people in the west will never have heard of. It also proudly boasts one of the most deliriously bonkers storylines to come along in ages.

See, a shadowy perpetrator has learned of a secret love potion that will enslave the hearts and minds of men. After boiling it for 360 hours, however, it's revealed that it’s not a love potion after all—it’s the AquaPazza, and it'll enable her to dominate the minds of everyone! Nobody’s safe, and only a good smacking can set someone afflicted by the AquaPazza straight once more.

Despite this setup so closely resembling my average weekend, it’s really little more than a thinly veiled excuse to set a bunch of anime characters at each other’s throats. Naturally, it takes a lighthearted, slightly wacky approach, as evidenced by one of the backgrounds taking place during a ComiCon event, and another during an idol concert.

The characters are a diverse bunch. Though they’re nearly all female, they offer a ton of variety in both design and gameplay. One of the characters, Manaka, seems to fight almost entirely by accident, constantly tripping over herself and dropping stacks of books on her opponent as she vainly attempts to keep them balanced. My personal favourite, Karulau, is a bit more basic—she swings around a sword that could cut a building in half.

Aside from the main cast, there are also mandatory selectable backup characters who skulk around until they’re called in to assist the main fighter by extending combos, throwing out unexpected attacks, or simply restricting the opponent’s ability to maneuver around the battlefield. They hop in, do their thing, and then jump straight back out.  Despite the inclusion of these assist characters, it’s still a more grounded game than the likes of Marvel vs Capcom 3. At no point while playing AquaPazza did my eyes start bleeding from the insane amount of things going on at once.

The controls are simple, mainly relying on the PS3’s four face buttons to get things done. Weak, medium and heavy attacks are topped off by the assist button, and special moves are done through the usual method of circular motions that often resemble SNK’s input style as far as complexity goes. Feedback is swift and snappy, with responsive handling leading to satisfyingly precise movement during bouts.

Aggressive play is rewarded with characters going into ‘High Emotion’ state, which gives a boost to damage output. Conversely, overly defensive and passive characters will drop into a weakened state where their guard is more likely to be broken and they receive more damage. There are a few more stat tweaks during this state that vary from character to character, but the final message is clear—it’s best to get stuck in during a fight.

This being a fighting game, it’s no great surprise that the single player modes are capped off with some irritating end bosses designed to bring progress to a screeching halt. They’re not as bad as, say, Omega Rugal from King of Fighters 98, but they bring their own brand of cheapness to the table. For example, one boss gains back both health and super meter as she fights, and while I’ve no doubt that AI tricks exist to scab a cheap victory out of them, attempting to take them on normally is going to result in clenched teeth and furrowed brows for all but the most accomplished gamers.

Speaking of which, the training mode is a little undercooked. While it offers up the usual assortment of moves lists, selectable health states and the like, it doesn’t do a great job of explaining the game’s unique systems, and has only two sample combos per character. This thin offering isn’t going to be of much use to anyone actively trying to learn the mechanics.

Fortunately, the online service fares better than the training, and offers up smooth matches even to someone who lives in the middle of nowhere like myself. The netcode’s up to snuff, and there's plenty of people online—it rarely took long to pair up for a rumble.

Despite its quasi-anonymous, unknown status, AquaPazza

is a surprisingly accomplished 2D brawler with a great mix of proficient fighting and fanservice. It’s more than worthy of consideration. Rating: 7 out of 10


Disclosures: This game was obtained via publisher and reviewed on the PS3. Approximately 10 hours of play was devoted to single-player modes (completed 5 times) and 3 hours of play in multiplayer modes.

Parents: According to the ESRB, this game contains mild language, suggestive themes, use of alcohol, and violence. Really though, it would take a crazy person to complain about this game being particularly offensive in any way.

Deaf & Hard of Hearing: The story mode is full subtitled, and while some audio cues may allow advance warning of certain attacks, the visuals alone convey more than enough information to play the game well.