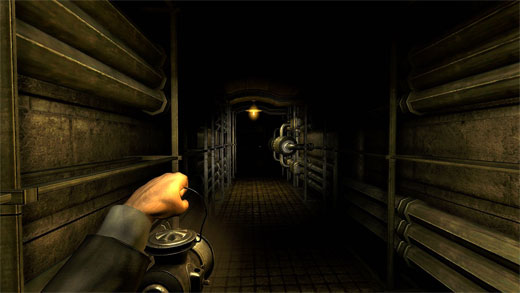 HIGH Picking up a dead pig and slinging it across the room. Whee!

LOW Having more fun doing that than playing the game properly.

WTF Someone sure liked getting descriptive about pigs getting jiggy.

If there’s one thing that’s largely indisputable, it’s that pigs are absolutely terrible at handling any type of machinery. Try to put one to work in a factory and they’ll simply wander around hassling all the other workers with their infernal oinking before defecating on the floor. Hand a group of piglets a Playstation Vita, and they’ll just squabble amongst each other over who gets to eat the thing, the insufferable dunces that they are.

No, pigs are totally crap when it comes to interacting with machinery. Not that this ever deterred Oswald Mandus from creating a machine for them, of course. He awakens at the start of the game tucked safely away in his bed, with only a few minor things out of the ordinary. For one, his bed is a large cage with thick iron bars around it. For another, his memory is largely absent with only the knowledge that his children are in grave danger remaining lodged in his mind to spur him into action. Gathering up a nearby lantern, he soon descends into the bowels of the machine he created—one with a distinctly unpleasant purpose.

With a setup like this, it’s a crying shame that it’s nowhere near as good as Amnesia: The Dark Descent. The reasons are extensive, from largely dispensing with scavenging for survival and removing hiding places, but the real problem A Machine for Pigs faces is that it simply isn’t scary.

The game proper—and I’m not making this up—actually opens with a child piping up ‘Please don’t kill me, daddy’ in a cheerful, singsong voice. The closest that this supremely melodramatic phrase got to affecting me was stunned disbelief that anyone in their right mind could pitch this line with a straight face and not get laughed out of the development studio.

The sanity effect is completely gone now, too. In The Dark Descent, Daniel was terrified of pretty much everything, and constantly in fear of losing his mind or ending up (literally) scared to death. Whilst enveloped in darkness his courage would fail him, causing him to stagger around drunkenly, gibbering in terror the whole time and imagining danger around every corner—are those sounds real or imagined? To alleviate this problem (and possibly keep his underwear dry) he could turn on his lantern with its limited supply of oil or scuttle closer to an ambient light source but… uh oh! That means the monsters can now see him! Flee, Daniel! Back to the darkness with you!

It was a wonderfully balanced system of compromise, one which punished players for relying too strongly on the safety of either environment by just the right amount. Staring at enemies was also impossible not just because Daniel would immediately start panicking at the sight of them, but also because the horrible blighters could sense his eyes upon them and would come pay him an unwelcome visit which would end up with his entrails rearranged on the floor.

Yes, this beautifully sadistic cycle of constantly pushing players into situations that they didn’t want to be in was a large part of the Dark Descent’s success as a horror game, and it’s utterly baffling that A Machine for Pigs has ditched all of these exceptional systems and has nothing to replace them with.

Oswald is made of sterner stuff than Daniel, it seems. He’s got no problem loitering around in the dark as he descends into the nest of ultimate evil, calmly watching hulking enemies wander around searching for him before spontaneously penning a work of overwrought literary observations into his journal. His behavior and reactions are, by their own merits, completely insane and it detracts from the game as a result.

Since it’s now possible to stare the violent monstrosities in the face without Oswald displaying even the slightest bit of concern, that’s exactly what I did. Upon encountering one for the first time, my response to the event was interesting—I laughed out loud at their design. On the whole, it’s about as terrifyingly sinister as a foot massage. Hell, I didn’t even realize the ugly bugger was an actual enemy until it punched Oswald in the face and killed him, which just made me laugh even harder at how underwhelming they were.

Then there are the “puzzles” scattered around the place, and I use that word very, very loosely. Here’s a prime example: at one point, Oswald is confronted by a lever which does nothing when pulled. Right beside it is a power station filled with gears; several are missing. As it just so happens, the needed gears are lying on the floor nearby, and right above the station there’s a big old sign which reads something to the effect of ‘Attention! Ensure all gears are properly fitted before operating the lever. The one to your right. Dumbass.’

It’s a bit of a brain teaser, that’s for sure.

Despite the lack of effective dread or horror in A Machine for Pigs, The Chinese Room has tried to compensate by stuffing it to the gunnels with gore and curiously-detailed verse describing really horrible things. It’s great for players who want to read about pigs rutting in the streets and spunking all over the place like a great big sticky version of Christmas, but not so great for those who want an atmospheric and unsettling horror experience to savour.

Amnesia: A Machine for Pigs is a hugely disappointing sequel which jettisons far too much of what made its predecessor work in exchange for nothing of value. It’s a little prettier than the last outing, but just about everything that made Amnesia: The Dark Descent such an exemplary addition to the horror genre is absent here. It isn’t scary, it isn’t cleverly constructed and even with such a short running length, it wears out its welcome long before the end rolls around. Rating: 4 out of 10.


Disclosures: This game was obtained via publisher and reviewed on the PC. Approximately 6 hours of play was devoted to single-player modes (completed 1 times) and there are no multiplayer modes.

Parents: According to the ESRB, this game contains… not much. There's no ESRB page for it, but let me be the first person ever to say that Amnesia: A Machine for Pigs probably shouldn't be played by the little ones.

Deaf & Hard of Hearing: Some of the sound design is effective, so losing that would further damage the game as a horror experience, but there's a good chance it would remain quite playable as the enemies are quite easy to avoid even without aural clues as to their locations.