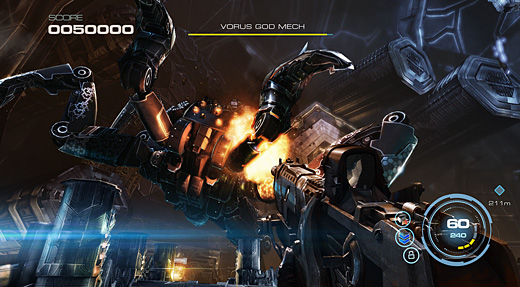 WTF The person recording the audio logs actually mentions that they'll have to be collected from all around the station.

suffers from an identity crisis.

It seems to take the frenetic gameplay associated with old school shooters like Quake or Doom and tries to mix it with contemporary design elements such as regenerating health and limited weapon inventories. There's a problem, though—it's a terrible game which doesn't understand what makes either style successful, and it certainly doesn't know how to successfully combine them.

See, Alien Rage sort of hints that the hero should be blasting into the midst of battle, rending enemies asunder, and emerging bloodied but triumphant after intense gunfights where skill is the only barrier between death and glory. However, the space marine players control seems to be made out of wet tissue paper. Attempting to storm alien positions will often result in an incredibly swift death, forcing a more measured approach in order to have any hope of making progress. Sadly, the measured approach isn't enjoyable for any number of reasons—ones which also culminate in the player's brutal, often unfair demise.

Most foes slide around the battlefield at a hundred kilometers an hour, gliding across any given surface as if they're on rocket skates. They usually head straight towards the player, so picking enemies off at range can be a challenge before they close in—especially given that half of them are usually invisible, and that they all take at least half a clip to kill unless a headshot drops them faster. There's no thought put into these rush-heavy encounters to make them memorable.

Taking cover in Alien Rage is weird, as it doesn't seem to exist for the benefit of the hero. Bullets often find their way into his flesh through seemingly solid barriers, and grenade splash damage nearly always leaks through. The regenerating health takes so long to kick in that enemies usually storm the player's position before it takes effect, and worst of all, there's no real alternative to ducking behind these dubious outcrops of ephemeral safety because staying out in the open is certain death. 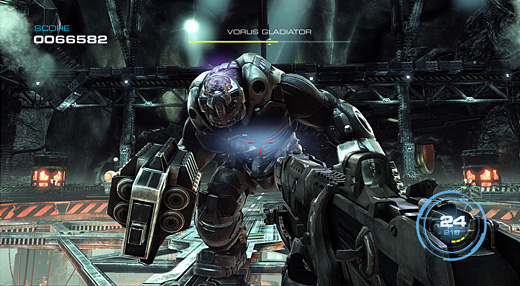 Further confusing the issue of what type of shooter Alien Rage is trying to be, it likes to bark out hilariously out-of-place verbal confirmations as certain kill types are triggered. "Headshot!" it'll warble after some alien's face vaporizes into a fine mist, followed by "Double Kill!," "Multi Kill!" and all that sort of nonsense. It seems to be doing its level best to lure players out into a position where they can get massacred by pointlessly chasing after these equally pointless awards. Oddly enough, it doesn't bark out stuff like "Killed through cover!," or "Last checkpoint was five minutes ago, d**kbag!"

Frustrations aside, the cadence of Alien Rage is thoroughly uninteresting. Frighteningly similar environments—pretty as they can be—are what's on the menu from the start of the game right through to the end. Occasionally a skylift will afford a view out into space or the like, but corridors, corridors and more corridors are what players should expect—corridors filled with exploding barrels and dull firefights featuring such brilliantly designed enemies as snipers who'll ceaselessly try to shoot through ten-foot-thick walls to take out the hero.

The story's similarly terrible, with awful, awful humor peppering the experience like lice crawling on a bug ridden mattress. Anyone who doesn't want Baldhead McGeneric Bastardson (or whatever the hero's called) to die a comically horrific death is playing it wrong. Nothing he says is funny. Nothing his friends say is funny. His enemies don't fare any better. "Say hello to my little friend?" Ha ha! It's a movie reference! How original!

There's also a multiplayer mode, though the amount of players online at the moment is incredibly low. Last time I checked post-release, there were a grand total of seven players on the servers, all in one game. As soon as I entered, it turned out that there were only four. It's tough to ascertain how competent the multiplayer is given such a desolate environment to test it out in, but from my brief sessions it looks like bog-standard fare.

Alien Rage may look the part, but it absolutely fails on numerous levels. It gives me no pleasure at all to report on how unremittingly terrible the campaign is, nor how I'd rather have eaten a bowl of festering mud than grimly chew my way through the later stages of the game. Adding insult to injury, Alien Rage caps it all off with a final boss battle that's such an atrocious pile of cheap-shot garbage that everyone involved in its design should probably be jailed for crimes against humanity in an airless room deep below the bowels of the earth.

just isn't very good. If it had nailed the combat, all its other flaws could perhaps be forgiven—but it didn't, so they can't. It's a terrible thing to say, but in a game stuffed to the gills with Xenomorphs, the most alien thing in the entire package is any sense of enjoyment whatsoever. Rating: 2.0 out of 10.


Disclosures: This game was obtained via publisher and reviewed on the PC. Approximately eight hours of play was devoted to single-player modes (completed one time) and less than one hour of play in multiplayer modes.

Parents: According to the ESRB, this game contains blood, strong language and violence. It's a violent sci-fi shooter, so keep the wee ones away.

Deaf & Hard of Hearing: Pretty much in step with any other FPS game on the market, though the game itself isn't really worth playing in the first place.

It was such a by the numbers game that it couldn’t even tempt shooter fans with its discounted price. Really a shame given how nice it looks.