Put a ring on it? 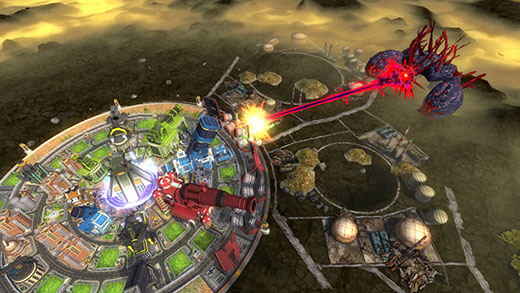 LOW …then having almost no further input for the rest of the game.

WTF 26 and unmarried? Yep, her life's basically over by that point. Time to dig a grave and hop right in.

Humanity just can't catch a break. If we're not blowing each other up, fending off zombie outbreaks or being invaded by aliens, there's a good chance we'll be doing our best to recover from some apocalyptic event. That's what's happened in Aegis of Earth: Protonovus. Mankind's been given a damn good smackdown, and the only way to survive is for everyone to build fortified, rotating cities filled with weapons to blow the hell out of anything silly enough to go anywhere near them.

There are two distinct stages to Protonovus. In the development phase, defenses can be set up, a number of peppy operators can be assigned to their posts, and various tasks can be accepted to advance the story or fish for rewards. Perhaps players will accept a bunch of migrants into the city for example, or wipe out a certain species of enemy. Taxes get then be collected, and anything to do with development or weapons research is undertaken. Unlike other tower defense games, nothing can be changed or upgraded on the fly once combat is underway.

Apart from defending the city, citizens have to be kept happy too. Circuses and various fun events can be set up to distract the plebs from their imminent demise, raising their satisfaction levels and making more people want to live in the city. On the other hand, screwing up in battle and letting their families be ripped apart like bloody strips of papier mache by the mandibles of invading enemies… well, that tends to put a frown on their faces instead. It's pretty standard management stuff overall, but doing well makes battle sequences easier.

When the demons come knocking (they wait politely until the player initiates a battle at a time of their own choosing) the city is comprised of several rings around a central tower, and these can be rotated individually so that cannons, missile launchers and various emplacements wind up pointing towards the encroaching bastards bent on ruining on the city.

When it gets hectic, things can get messy. I've turned the wrong rings more than a few times whilst under pressure, but it's easy overall. There are more than enough player assists to get through most battles relatively unscathed—warning indicators point in the direction enemies will appear from, and a multitude of operators keep the player alerted to every incursion.

The big issue with Protonovus becomes apparent early on—it's absurdly easy to set up a base that can repel pretty much anything. Simply plonk down four sets of merged missile launchers and presto! The city is protected by three hundred and sixty degrees of death. With a few additional cannons thrown in and tanks roaming the perimeter, the game is pretty much won. It doesn't matter that enemies have unique approaches such as rushing the walls, or shooting lasers from afar since this setup will melt even bosses into mulch without breaking a sweat.

The developers try to counter this strategy by making a ton of a city's land unusable to prevent weapon systems merging or becoming too strong for the enemies. However, even with these obstacles taken into account, Protonovus regresses into a passive state where players become little more than observers. Sure, they might have to swivel a gun once in a while or trigger super attacks here and there, but that's pretty much all that's required.

Although I like the idea of what Protonovus is going for, it plays its cards too soon and runs out of steam far too quickly. There simply isn't enough variety to sustain its extended run time, so fatigue and boredom set right in. It's a good try, but these rotating rings of death are in need of a more challenging, more interesting campaign. Rating: 4 out of 10

Disclosures: This game was obtained via publisher and reviewed on the PS4. Approximately 30 hours of play were devoted to the single-player mode, and the game was completed. There are no multiplayer modes.

Parents: According to the ESRB, this game contains fantasy violence, mild language, and mild suggestive themes. Honestly, I can't see any reason why kids wouldn't be able to play this. I can't recall much swearing, the miniscule amount of innuendo would fly clean over their heads, and there's no blood or guts spraying all over the place.

Deaf & Hard of Hearing: Most of the game's dialogue is subtitled or conveyed through text.

Remappable Controls: No, this game's controls are not remappable.