Gun in the sun 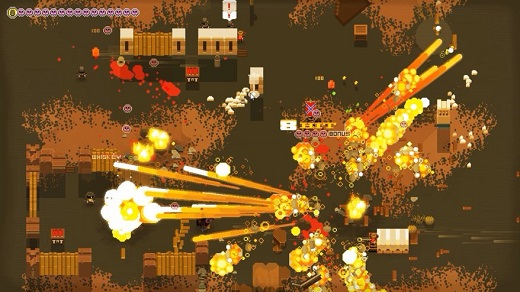 A Fistful of Gun is an old-school arcade shooter that doesn't take long before throwing players into the deep end—soon after pressing start, things get madly hectic. It's a demented, bullet-riddled, top-down take on the Wild West that doesn't quite follow the laws of reality or common logic… It should be the perfect setup for a video game, right?

Well… yeah. It should. Sadly, it doesn't quite do the concept justice, though.

The story mode gets bullets propelling themselves into bandit flesh as quickly as possible with a simple narrative: a railroad tycoon has gone and done a deal with the devil. Now he's the target of karmic retribution courtesy of some gunslingers who apparently… uh… don't like railroads very much?

In this mode, players will often be given a choice as to which path they wish to take, usually leading to bizarre situations. Things like pushing railway carts to their destination, sneaking past searchlights, or being attacked by rampaging wildlife. Each encounter overcome counts as travelling one mile, and every twelfth mile brings a boss to take down. These setups might be odd, but they're not easy. In fact, they're so not-easy that I didn't manage to finish the game.

A Fistful of Gun has an appealingly simple retro look to it, but it's hard to follow what's going on when it all kicks off. Horses run around the screen offering themselves up as mounts for daring players, bullets fly every which way, safes need their contents looted, extra lives have to be retrieved, bottles of whiskey offer drunken powerups—it's insanely tough to keep track of it all during hectic battles, and death is but a single bullet away. After losing my last life in act two multiple times with no clue as to what had killed me, all motivation to keep going seeped away.

On the plus side, each unlockable character has their own unique twist when it comes to killing—Noah's shotgun needs each barrel reloaded after a shot, Abel is equipped with a six-shooter that fires when the right stick is flicked in the direction of lawbreakers, and Duke carries a massive machine gun that slows him down to a crawl whilst attacking.

Strangely, some of these characters can only be controlled via mouse or joypad exclusively. There's a lot of variety in this diverse roster, but none scratched my traditional twin-stick shooter itch quite right. Despite all the obvious efforts to make each gunslinger handle differently from the other, I couldn't find one who covered all the bases to my satisfaction.

There's a multiplayer mode that accommodates up to nine players at once, though the story mode is sadly exempt from co-op. Not that it seems to matter much, as the online has been bereft of players every time I checked. At most there have been three other players online at the same time, meaning that it's unlikely most will ever experience this free-for-all brawl as originally intended.

I wish I enjoyed A Fistful of Gun more than I do. There's a lot about its visuals and arcade-style presentation to like, but it never stops feeling disappointingly shallow and overly-chaotic. Exciting and charming in small doses, it's just a relentless slog through hails of gunfire during extended play. Fans of the Western genre might get into it, but I'm riding to another saloon. Rating: 4.5 out of 10


Disclosures: This game was obtained via publisher and reviewed on the PC. Approximately 5 hours of play was devoted to single-player modes (completed 0 times) and 1 hour of play in multiplayer modes.

Parents: According to the ESRB, this game has not been rated. It should be suitable for most ages though, despite the booze, safebreaking and tons of pixelated corpses piling up.

Deaf & Hard of Hearing: A Fistful of Gun mainly relies on its visuals to convey its necessary information. Can't see many problems here.