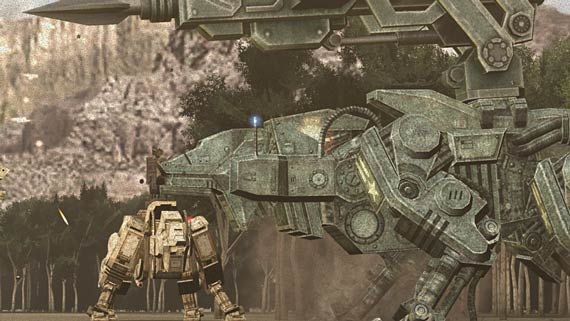 I recently reviewed Operation Darkness, and as I enjoyed that game's engaging story and challenging campaign, I couldn't help but wonder why more Strategy RPGs weren't being made. Then I played Zoids Assault, and I remembered. Combining dull gameplay, uninspired design, and flat-out boring storytelling, Zoids Assault is the worst game I've played in quite a while.

SRPGs, by their nature, are always going to be a little on the slow side. The simple fact that they're paced just a little more languidly than a game of chess ensures that only the most dedicated fans of strategy will have the patience for them. In a good SPRG, this problem can be mitigated by such elements as compelling plots, innovative mechanics, and impressive level and enemy design. Zoids Assault has none of these things. In fact, it has just one thing to recommend it. Like Operation Darkness before it, ZA embraces speed-based turns, so rather than the player moving all his characters, then the computer having a go, which unit moves next is determined by each character's mobility rating. Unlike OD, however, the player is shown what effect various equipment will have on that speed rating, so they can make informed decisions about how to set up their Zoids. This bit of competent design is the only really good thing about Zoids Assault.

The bad parts begin with the opening movie. Right from the start, the developers demonstrate a complete unfamiliarity with any of the basic concepts of how to tell an interesting story. The five-minute opening cutscene features a few similar-sounding characters talking about a battle that the player doesn't get to see which has no clear stakes. The audio plays over a still image of four robot animals (or "Zoids") that the camera zooms in and out on. For the second half of the cut-scene, the static image is replaced by literal static, as the screen fuzzes out. I know it was supposed to represent the fact that a surveillance satellite had gone off-line, but that doesn't make two minutes of snow any more interesting to watch. 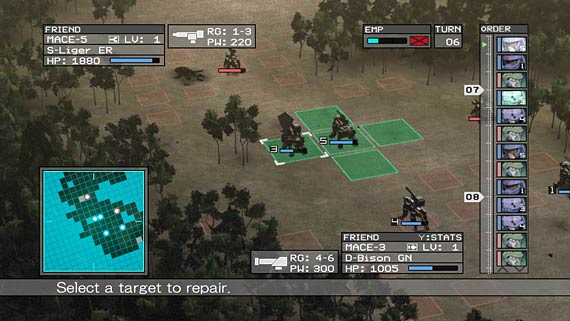 Amazingly, it's all downhill from there, as the developers manage to present the story in the least interesting way possible. Every mission is prefaced by a sequence of a female soldier testifying before a governmental committee about the plot of the game. Not only does having the framing device set well after the plot's events ruin whatever drama the missions might contain, but the actual presentation of these sequences is so unattractive that I had to struggle to maintain attention. The still images that play under the woman's monologue are the worst I've seen in a professional videogame this generation, and the speeches themselves go on for so long that I found the screen tended to darken towards the end, as my Xbox went into power save mode because I hadn't touched the controller in so long. Writing has to be pretty fantastic for a monologue about people I don't know in places I've never heard of to hold my attention for more than five minutes at a time. The writing here is pretty damn far from fantastic. Also, here's a tip for the localizers: if you want there to be even the barest chance of people taking your game's story seriously, don't quote The Simpsons.

Even the presentation within the actual game is bafflingly awful. It's not the graphics I'm complaining about here—this is clearly a low-budget title, so I wasn't expecting much. It's the strange decision on the developers' part to cover the screen in a 'film grit' filter at all times. Every moment of actual gameplay has a stream of pebbles and lines running across it, in some misguided attempt to make the whole thing look like WWII footage. Even if it was just an attempt to disguise the graphical fidelity, it doesn't succeed at anything it's attempting to do, and it gets old really, really fast. I've got no problem with developers trying something different with the visuals. I personally play many games in black and white, but this is the kind of thing that players should be allowed to turn on and off, rather than be forced to endure.

While the gameplay is solid enough by SRPG standards in that it has clear rules about movement and attacking that are easy to follow, a design choice combined with the lack of decent enemy AI combine to render the game's combat terribly unsatisfying. It's an interesting gameplay idea—instead of each character attacking one at a time, based on the range of their weapons, most attacks are performed co-operatively. Whenever the player goes to attack someone, the target is given a target lock-on or 'SCAN' rating. The higher the rating, the chances of hitting and doing damage. If the rating gets high enough, because two or more characters have target locks, then additional characters, so long as they're in weapon range, can attack the target. This system means that the best possible strategy in any situation is for the attacker to move their units in a pack, then surround their opponent, ensuring that they get upwards of four shots at the enemy per turn, rather than just one. 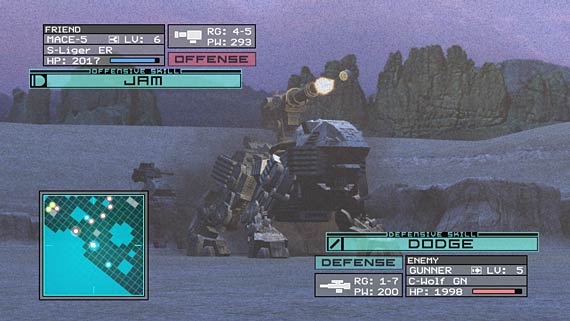 This focus on grouped movement and attacking is certainly an interesting idea, but the problem is that it's the only strategy that the player needs to use. The enemy AI never really gets the hang of the surrounding and concentrating fire thing, and have a nasty habit of walking directly into crossfires. The fact that the player's five mechs have such specific roles only serves to strip even more variety out of the game. There are two mechs that move quickly and specialize in close-range attacks, two slower mechs that use long-range weapons, and one who heals the other four. The only strategy required is ensuring that everyone has a clear line of sight on the target, and halfway through the game's 14 missions, the player gets access to indirect-fire missiles, so even that problem becomes moot. The player is asked to really work for their victory only a couple of times in the entire game, when either a time limit or the requirement to defend multiple targets forces them to split up the team. The rest of the time—the vast majority of the time—the combat is both incredibly simple and mind-numbingly repetitive.

Zoids Assault, while not a complete disaster, is something altogether worse. It's completely unnecessary. At least a disaster might have been interesting. This is basically the definition of uninspired design and execution. There's no challenge, no real depth, no compelling storyline. The game is just flat and tedious, overly long at under ten hours. There are no surprises or twists, just the grind of fighting the same basic battle over and over again. Perhaps nothing more clearly demonstrates the profound ambivalence the game created in me than the fact that the story never made it clear exactly what a Zoid was, and at the end of it, I had no real desire to hop onto the internet to find out.*   Rating: 3 out of 10

* As I wrote the review, though, checking seemed like the responsible thing to do, so here's the answer: they're a line of animal robot toys from the '80s. I was still too uninterested to read any farther, so if there's a reason these toys from the '80s are acting as the main fighting force in a future-war setting, then I have no idea what it is.

I’m not the Critic who wrote the review, but wow… you have no idea what you’re even talking about. first of all, it isn’t a “budget game”, it’s been released with an MSRP of $60. that in itself is a complete insult to gamers who might be remotely interested in the title. besides that, Zoids Assault is easily the worst game i’ve played this year (and probably last year, too) taking SRPGs and 360 software in general to an all-new low. the graphics are terrible, the story is terrible, the production quality is terrible.. everything about it is below-bottom-of-the-barrel stuff.… Read more »

this is one of the worst reviews i ever read LOL. this review makes originality and design, and graphic uniqueness a crime. its only a game, it does a good job at being a game from what i understand. its not something you want to marry. zoids definitely, passes the fan-service test. it passes the strategic elements of its genre. this game would make a GREAT RENTAL. when critics and reviewers, attack budget games for trying hard to meet the demands of its genre, then its punishment for originality. YOU WON’T FIND MUCH ORIGINALITY from big budget companies, they “know… Read more »