My Fist, Your Face 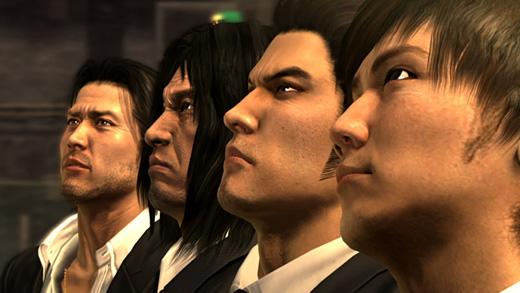 LOW My continuing inability to find a save point in downtown Tokyo.

There is a section early in the first Yakuza game that does a magnificent job of establishing series star Kazuma Kiryu as an impossible bad-ass without actually forcing the player to take part in any battles. As foes flee rather than risk getting into a fight with the legendary "Dragon of Dojima", an impression of Kiryu is built up in the player's mind—and perhaps doubts are created as well. Can a single character be this exceptionally tough?

Three games' worth of needlessly brutal and viscerally stunning violence erase all those doubts, and leave Kazuma Kiryu as one of the great video game leads of all time. Naturally, this leads to the giant question mark hovering over Yakuza 4

—with all this time and effort spent building a compelling character, can the franchise really survive his demotion to co-star? After playing Yakuza 4, I now feel foolish to have ever doubted the developers.

The franchise, famous for getting better with each new installment, doesn't disappoint with this newest 3D real-time brawler/RPG hybrid. Everything that worked last time has been retained, and everything that was slightly shaky about the franchise's move to the next generation has been tuned to near-perfection. The new characters are revelatory, and not simply because they're interesting in their own right—but because their inclusion transforms the entire way the game is structured, hugely improving the flow.

With each Yakuza game designed to run somewhere in the 30-40 hour range and the player only reaching Kiryu's full potential just before the last few fights, players were faced with a gradual progression of abilities, potentially frustrating anyone hoping to get at the good stuff right away. By breaking the game into four distinct sections and giving each main character 20 levels worth of abilities to unlock, the game ensures that the relentless beatings a player dishes out will be rewarded with a constant sense of reward and accomplishment.

At the beginning of each chapter the player will find themselves leveling up every couple of fights and gaining access to an ever-deepening set of abilities. The game also dodges the "reset-button" feeling of being put in a new character's shoes every ten hours—yes, players will be reduced back to Level 1 three separate times over the course of the game, but all three new characters have fighting styles so vastly different from one another that it never felt like I was asked to buy the same upgrades over and over again. Then there's Kiryu, who's barely been powered down at all since Yakuza 3. He begins the game monstrously powerful, and things just scale upwards from there. 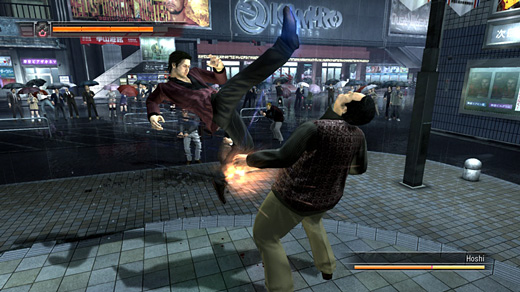 The game's story is the by-now-standard Yakuza tale of betrayal and underworld intrigue, featuring vicious crooks, mysterious women, and a plethora of tragic childhood backstories. Seriously, there's a character in this game who somehow managed to be orphaned twice before their fifth birthday. (Wrap your head around that one!) Everything is played so earnestly and with such a straight face, however, that it's impossible to fault the developers for their more melodramatic flights of fancy—especially when so much of the plot is devoted to examining the consequences of the events of the previous games, as well as tying up a number of loose ends. Yakuza 4's story is equally concerned with expanding the world of the franchise for longtime fans and providing a story accessible to first-timers. Unsurprisingly for a game series with such a great storytelling track record, it succeeds on both counts.

While the story is certainly convoluted—as one might expect a  tale with four main characters to be—the events are enthralling, the people are sympathetic, and in the final analysis everything holds together perfectly well. More importantly, though, everyone's actions make perfect sense, so long as the audience is willing to accept characters who value honor, dignity, and justice above all else. With North American culture so utterly devoted to post-modern ironic detachment at the moment, that's not necessarily a given. Fans of the series troubled by some of the over-the-top content in Yakuza 3 needn't worry—this time around no one is motivated by an unhealthy devotion to objectivism.

The gameplay is similarly immaculate, with the fights still just as uncompromisingly vicious as ever. Most of the classic "Heat Actions" are back, along with a host of new ones. From the comforting familiarity of smashing someone's face into the hood of a car, to the more bizarrely ornate maneuvers like picking up a foe and using their body as an ersatz battering ram (spoiler alert: the wall never gets knocked down), the fighting engine never fails to satisfy. Even the boss fights, long a problem with the series, which is tuned more towards large brawls, have been balanced far better than ever before—not once did I have to dial the difficulty down in mid-fight, which is a first for me with these games. Heck, even the de rigeur Majima fight didn't feel like a chore this time around! Also, the foot chase scenes, which proved so divisive last time around, have been sped up and simplified—the player now has access to a variety of special moves that ensure they won't ever spend five minutes running around the same block over and over, their quarry just out of reach.

The only obstacle to complete enjoyment of Yakuza 4 are the sidequests, which, while largely fun, are still a little on the obtuse side. Even though a character has been added whose sole purpose is to let the player know whenever a new side-mission becomes available, the missions themselves can occasionally be baffling since it's not always clear exactly what the player is meant to be doing, or where they're supposed to do it—and a few of the missions are flat-out missable if the main storyline progresses too far. With the main plot functioning as a such a propulsive device, tracking down a package of to-go curry sauce for a group of starving construction workers can seem like an unnecessary distraction. Likewise, the two extensive "training" minigames, where different characters can coach hostesses to become number one or turn small-time fighters into Coliseum champions are fairly in-depth and time consuming, and since they appear fairly late in both character's storylines, indulging in them means stopping the story dead in its tracks, just as it's reaching the denoument. As with other entries in the series, there's a point where the story pauses so that players can go back and polish off anything they missed, but that merely highlights just how disconnected all the side content is from the main story.

If the Yakuza series were merely the sole franchise keeping the long tradition of the 3D brawler alive, it would be worthy of praise. The fact that it manages to do that while also offering some of the best storytelling in the industry—and that it accomplishes these things essentially once a year—all combine to make it one of the most impressive series around. Yakuza 4

comes from the best possible video game pedigree, and it does its predecessors proud. Rating: 9.0 out of 10.

Disclosures: This game was obtained via publisher and reviewed on the PS3. Approximately 60 hours of play was devoted to single-player modes (completed 1 times).

Parents: According to the ESRB, this game contains blood, violence, strong language. Parents should keep their children away, and not just because of the omnipresent, incredibly brutal, violence. There's also the fact that the game somehow managed to avoid "alcohol use" and "tobacco use" tags despite desperately needing them. Not only does getting drunk help Kiryu's fighting abilities, but every time you order a drink in-game you're treated to a few dialogue balloons extolling the virtues of a particular brand of liquor. Never before has product placement so endangered America's youth. Unless, of course, you count the game's depiction of smoking, which can best be described as film-noir-y. A disturbingly large number of the game's cut-scenes feature tough guys looking cool while smoking, and Kiryu even has a move where he lights up in the middle of a fight, then flicks a lit cigarette into the eye of an opponent. So yeah, bad influence for the kiddies all around.

Deaf & Hard of Hearing: You will be largely okay with the game. The dialogue is all in Japanese, so English subtitles are a necessity for international marketing. There are some audio-centric areas of the gameplay however—one character has a detector that makes finding bonus items simpler, but it works only by beeping when you're close. Also one martial arts training sequence may be nearly impossible to complete without the ability to hear bottles being thrown, so totally finishing the game could be off the table.

Playing Yakuza 4, I felt as if Kiryu went from being a solo artist to being a part of a popular boy band. In other words, having four different main characters made the whole experience a little thin compared to Yakuza 3.

Also, the interesting bits about the game world and plot, like corruption in Japanese police force and Chinese in Japan, were superficial in the end.

Then again, the next Yakuza game has zombies.

Well, I can’t speak for the first two, but there are optional introductory movies that you can watch to bring you up to date on the story in both 3 & 4. These can run for several hours, if I remember correctly 😉 Personally I would start with #4. Compared with #3, there seems to be less ‘filler’ fights, which is great – in #3 you couldn’t walk 10 yards without some punk stopping you, which gets old real fast. You also spend a good part of #3 helping out those goddamn orphans, whereas #4 lands you right in the… Read more »

I just wonder if a newcomer to the series is completely lost when starting with Yakuza 4?

Sports games get a bad rap for making small incremental improvements year-on-year, but to my eyes Yakuza 4 is guilty of this too. I enjoyed (but didn’t complete) Yakuza 3, and was looking forward to this game. I agree that the storyline has improved greatly, with interesting characters who pull you into their stories. However, as Daniel mentions, the side quests leave a lot to be desired, and a lot of the optional extras and minigames are okay, but not really fun. If you’ve played any of the previous games, then there’s no real desire to play the minigames again.… Read more »