Welcome back for the second round of the Xbox Live demo round-up, where I, the idlest hands in the game-reviewing community desperately try to use a plethora of demos to take time away from the vast, barren expanse that is my schedule.

Without any further adieu, here are the games! 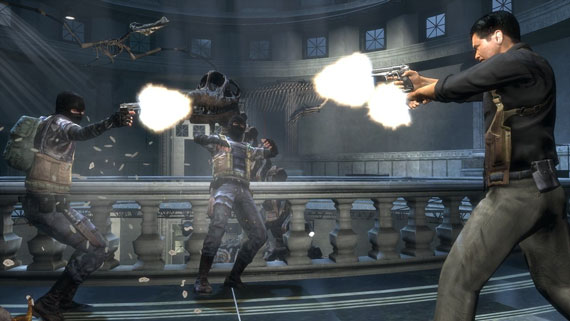 Stranglehold – Ever since the film Hard Boiled came out, video game players have wanted gunfighting that approached the level of thrill the film offered. They bought copies of Max Payne and Dead to Rights in the vain hope that they would substitute. So releasing a demo for this game seems a little on the superfluous side, after all, if there was ever a video game with a built-in audience, this is it. As for the demo itself, there's plenty of fun action on display, seamless use of bullet-time, good environmental damage opportunities, and an extremely entertaining precision shooting system. All things that suggest that the finished product will be a captivatingly violent, if somewhat shallow experience. A word of warning, though, if you elect to download the demo, be sure to quit out of it once you've finished the first level. After completion, an unskippable demo plays that's nice enough to spoil all of the game's locations and weapons, leaving you, the player, with no surprises to discover in the full version. 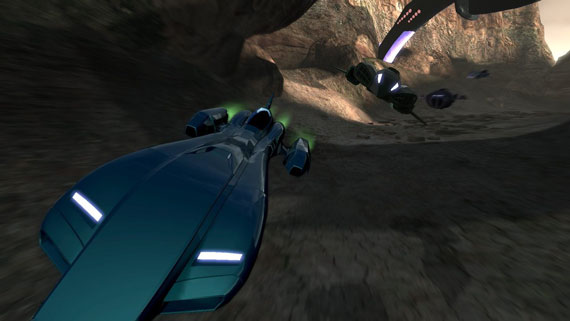 Fatal Inertia – Once again, I found myself headed in a circle over and over. This time, though, instead of driving sports cars on well-paved roads, I was flying a hovercraft through circular canyons. I can't give much more of a sense of the game, because, honestly, things moved so fast as to be confusing. All I could make out were multicoloured blurs trying their best to avoid running into rocky blurs while occasionally firing glowing blurs at one another. Frankly, I doubt that English isn't going to have a wide enough vocabulary to describe the activities contained in the demo for another fifty years or so. 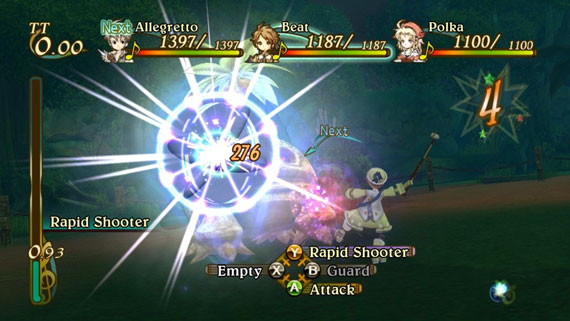 Eternal Sonata – RPGs are incredibly hard to judge based on a small slice of gameplay. This is because their stories tend to be their strong point, while their gameplay tends to be on the weaker side. Eternal Sonata seems to be the exception to this rule. For the first time in I don't know how long I found myself enjoying the endless bouts of combat. Instead of menu-based combat Eternal Sonata allows the player to physically run around a field, hacking and slashing at opponents for seconds at a time. It's simplistic combat to be sure, but it freshens things up enough to interest me in the finished product. 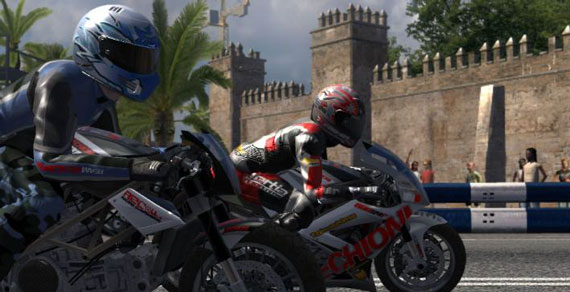 MotoGP '07 – Ah, high-speed motorcycle racing. Theoretically, I should love this, after all, I spent ninety percent of my time in San Andreas just speeding around highways and across country. While it's pretty enough and fast enough, I just can't see the appeal of a realistic motorcycle racing sim. Spending all of my time to figure out how much I have to slow down to make a turn correctly isn't my idea of a good time. If it's yours, go ahead and download away. 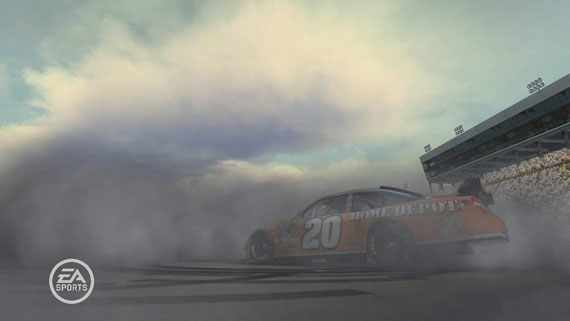 Nascar '08 – See the MotoGP review but slower, and with cars. Also the tracks are much less interestingly shaped tracks. Sadly, the demo is too short to give players a sense of the things that make NASCAR interesting, namely the stress and maintenance requirements of long-distance endurance racing. On the upside, though, there's a truly heroic amount of product placement. I myself spent my eight laps driving around as the Home Depot car. 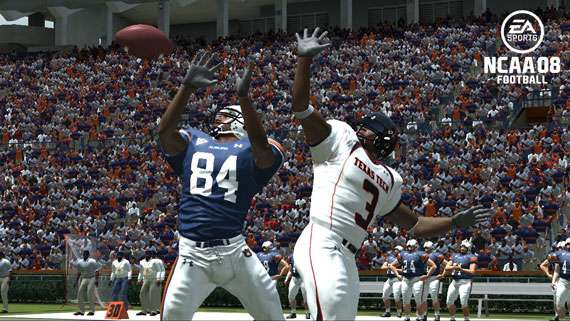 NCAA football 08 – Sadly, I'm without the skills necessary to judge whether or not this is a faithful and accurate representation of the noble game of American football. I can say, however, that it's fairly easy to control. I could pick a play, make people run, throw a ball, do everything football players are supposed to, it just didn't work out well for me very often. The central point I'm trying to make is that everything controls cleanly enough that people who know about football should be able to use this demo to judge whether NCAA is going to be a good football game or not.

All-Pro Football – Ditto on the NCAA demo, only the menu interface was a little more user friendly. 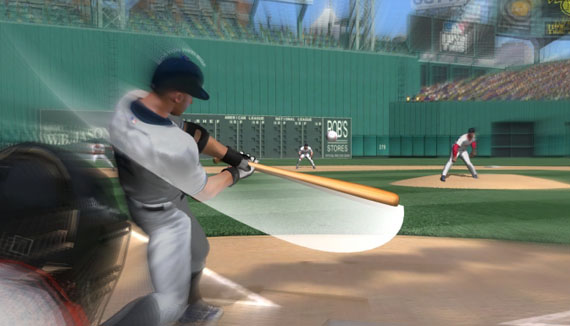 The Bigs – I played through this 3-inning demo five times, that's roughly an hour of gameplay. And in that hour, across fifteen innings, for a total of 45 at-bats and just under a 135 swings, I managed to hit exactly two pitches. While the pitching controls are perfectly fine, I found the batting totally impossible. There were no clear instructions, no training mode, nothing to help me figure out what the heck was supposed to be going on. The Bigs may actually be a fun arcade-styled baseball game, but its demo actually managed to have the opposite of the intended effect on me. Now there's almost no chance I'll ever play the full version. 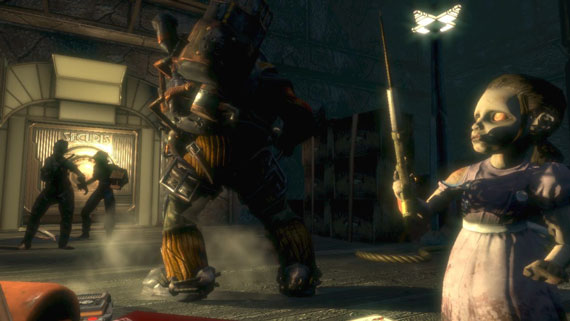 Bioshock – It's nice that someone went to the trouble of building a video game with the express purpose of attacking the social theories of Ayn Rand. Also, they included a beautiful if hilariously impractical underwater city. In any event, it's a game that allows the player to gun down the pretentious socialites who have now been transformed into ravening monsters. It's a fun demo that gives a wonderful taste of the shooting, magic using, and exploration of the game, and the wonderful world that it takes place in. Even if it does feature one pretty prominent and hilarious typographical error – the first person to find it and mention it in the comments wins a smug sense of self-satisfaction. 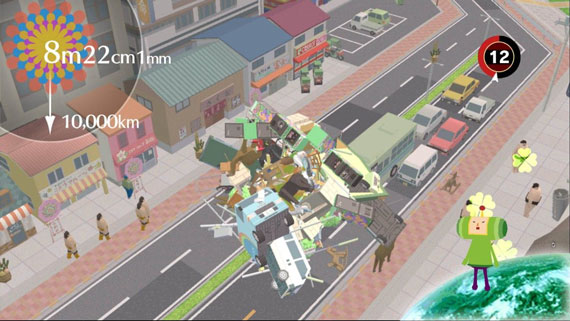 Beautiful Katamari – It's exactly like the last two Katamari Damacies, only with crisper graphics and fewer loading times. This demo is only worth downloading for one of two reasons-if you've never tried a KD game and you'd like to find out how it plays. Alternately, if the full game is full priced as opposed to discount priced, this is probably all the 360 Katamari Damacy you'll need. After all, as fun as the demo may be, the entire game will likely just be more of the same, and while Katamari Damacy is certainly fun, there's no way it's sixty dollars worth of fun.

Thanks for joining me here at the Roundup folks, see you next time a large glut of demos are all released within a relatively short period.

Good guess, but not what I was thinking of. I’ll give you a hint – it’s in the restaurant where the party was.

Even if it does feature one pretty prominent and hilarious typographical error – the first person to find it and mention it in the comments wins a smug sense of self-satisfaction.