Welcome to the most superfluous of features here at GameCritics.com, Dan’s demo roundup! Why, you may ask, would someone review demos? It’s quite simple, really. In a perfect world, say, the world of Star Trek, the Next Generation, or the film Demolition Man, people would have the time to play brief sections of video games to decide for themselves if they like them. Unfortunately, in this busy, fast paced world, where the average person spends 60 hours a week at work (and another 10 on the commute), that sadly just isn’t the case. That’s why I, the only video game reviewer on the internet with a lot of time on his hands, have taken it onto myself to play all the new hot, hot and new demos currently available at the Xbox Live Marketpalce. That’s the motto here at Dan’s Demo Roundup: Spending a very small amount of time with tiny portions of games, so you needn’t bother! 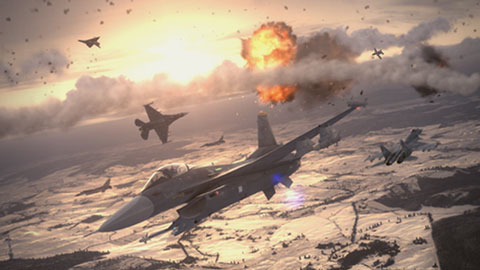 Ace Combat 6 – Modern air combat games are problematic. As I mentioned in my review of Battlestations: Midway, World War II was the last time humans were completely responsible for aerial combat. Back when planes flew slow enough and missiles weren’t good enough that people had to rely on their machine guns and their reflexes. By comparison, Ace Combat 6 offers a world where people jet along at over a thousand miles per hour, waiting until their onboard computer detects which of the tiny, fast-moving specs in the distance is a bad guy, and then pressing a button and watching smoke trails fly off into the distance to do the actual killing. Perhaps if the demo had offered some kind of training mode to explain to me the intricacies I would have understood just how deep and interesting the game is, but no tutorial was offered, leaving me unimpressed. 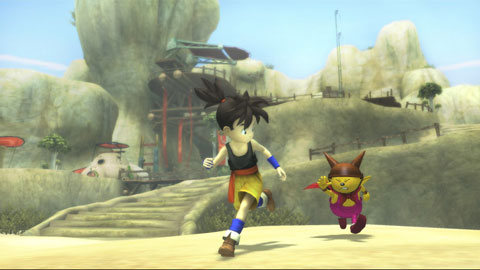 Blue Dragon – Apparently Akira Toriyama, the celebrity cartoonist responsible for Dragonball, has done the character designs for a new RPG. Beyond those attractive cartoon designs, though, there doesn’t seem to be much separating this from the standard genre fare. Being able to avoid monsters in the field is nothing new, nor is the timing-based minigame that determines how much damage attacks will inflict. Everything works well enough that this should attract RPG players, but I suppose the wider appeal of the game will rely largely on the strength of the story, which there isn’t much of a sign of in the demo. On the upside, though, during the demo’s boss fight, an original rock song plays, which is a nice touch. It doesn’t seem to be about the boss fight, the way those Scooby-Doo songs were, but the effort is appreciated. 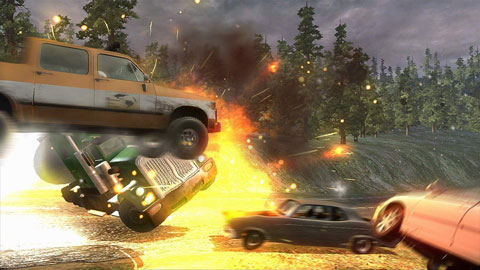 Stuntman: Ignition – A new entry in the franchise that lets us, the gamers, see how amazing movie car stunts are in no way actually performed. The original Stuntman was bedeviled by awkward controls and punishing loading times, two things that seem to have been fixed this time around. The biggest change, though, is the switch from entirely scripted stunts to Crazy Taxi–style scoring. Although the player still has to hit specific stunts the director lays out, they’re encouraged to make their own stunts along the way by drifting, passing close to vehicles and obstacles, and getting as much air as possible. If the entire game is as good as this demo, Stuntman: Ignition could well become the greatest example of sequel quality increase in history. 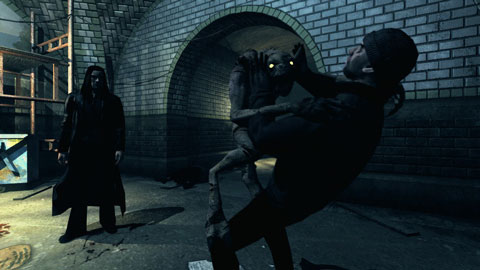 The Darkness – I learned a few things over the course of the demo. That like it or not, excessive amounts of blood makes shooting someone more satisfying. That no matter how evil the man you’ve just shot is, sending a fanged demonic tendril out to tear his heart from his chest kind of makes you feel like a bad person. That Starbreeze is the only company that should be allowed to make first person games. How could I not get a game whose demo allowed me to stand in front of a television and watch an entire Popeye cartoon? The only possible downside is that the game was written by Paul Jenkins, who was the credited writer of Civil War Frontline, one of the stupidest comic books in the history of the medium. 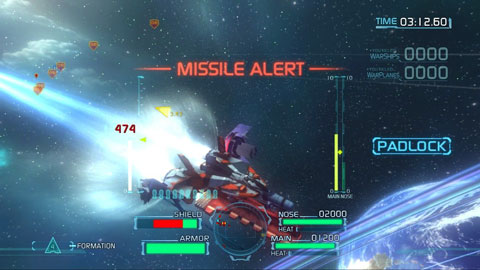 Project Sylpheed – In a corollary to my Ace Combat 6 comments, I’d like to mention that if videogames have taught us anything it’s that war in the future is oddly similar to naval combat in the past. Giant capital ships that fire large cannons at other giant capital ships, while smaller ships fly around, defending and attacking them. If the game tricked me into playing it by having a title suspiciously similar to Slipheed, the classic Sierra side-scorlling mech game, it kept me playing because the actual gameplay-flying around in a chaotic mess of ships, missiles, and fusion trails, blasting away at enemy fighters and performing attack runs on capital ships, reminded me of Wing Commander and Descent: Freespace. I can’t say whether this enjoyment is derived from the actual game’s quality or just some sort of conditioned reflex, but I’m definitely going to play the full version. 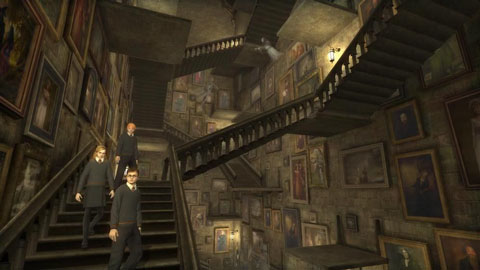 Harry Potter: Whichever One This Is – I hate to be this guy, but even I found it hard to not giggle when the first direction is ‘Press Y to get your wand out’. Unfortunately, beyond taking out that wand and using it to lift a couple of items, there’s almost nothing to do in this demo, and no time to do it in, as the demo has a five minute time limit. I suppose the developers were afraid if players were allowed to wander around the five available rooms for an unlimited amount of time they’d see all the game had to offer. If that’s true, then weep for anyone who actually purchases this game. 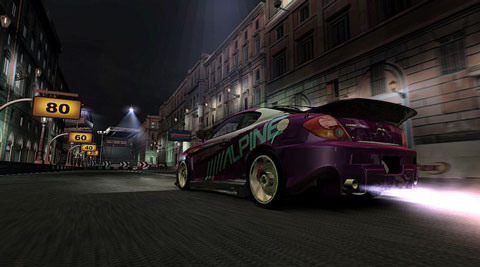 Juiced 2: Hot Import Nights – I want to slap whoever came up with that title. According to the demo’s intro, this is the premiere showcase for the ‘tuner set’. I assume that means ‘tuning’ will be featured in the finished product. The demo mostly consists of driving around in a circle, which is as fun as circle driving can be (read as: not very much). On the upside though, every race’s title card features a sexy babe in revealing clothes, so that’s a plus. Although, to be fair, it’s a plus that suggests the developers knew they were releasing a dog, and were desperate to pretty it up in any way possible. Only time will tell if that’s the case. Seriously, though, if you want to know, ask time, because I won’t be playing it 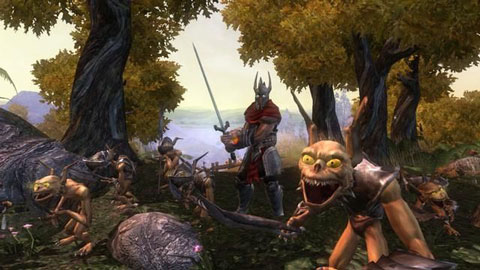 Overlord – It really is Pikmin meeting Dungeon Keeper. The exact gameplay of Pikmin with the premise and sensibilities Dungeon Keeper. If Darkness and Paper Mario hadn’t already come out I’d be guessing this would be my early pick for game of the year. 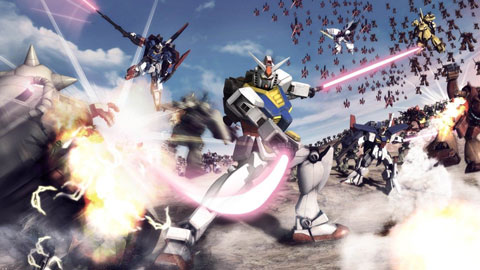 Dynasty Warriors: Gundam – Another entertaining hybrid, this time legitimate genre mashup rather than just a rip off of two great titles. It’s all the fun of neverending hack and slash gameplay coupled with the moral superiority that comes from destroying giant (presumably unmanned) robots as opposed to thousands upon thousands of living, breathing people. Actually, this demo may be the best possible way to experience this particular game because, if my experience, Dynasty Warriors titles tend to get tedious and repetitive about thirty minutes in.

Well, that’s it for this edition, but please, feel free to join me next time when I take a look at… other new demos, I guess.

Overlord is indeed fairly solid, but I have some issues with it. My biggest one is simply that it’s a game billed as being about playing the bad guy, but you do little but vanquish evil and help the peasants exactly as you might in any generic good-oriented fantasy RPG. You do have the option of killing the peasants, and you can very occasionally make quasi-evil decisions, but it’s like this light veneer. Dungeon Keeper went much farther and was not exactly eyebrow-raising with its descent into darkness. The controls are a bit iffy, at least on PC. And I’d… Read more »

You know, I actually really like this article, and have always thought it would be cool to have a segment based on reviewing demos. In fact, more often than not I find that my decision to buy a game is very heavily influenced on the quality of the demo, and unfortunately for developers/publishers, if the demo is fun enough on it’s own, sometimes I won’t buy the game and simply continue to play the demo. 😉

I’m really temped to grab Overlord. Looks really solid. I’m also interested in Darkness, if only because it’s designed by the team that made Riddick, which is one of the best games ever. Kudos on a great article Dan.