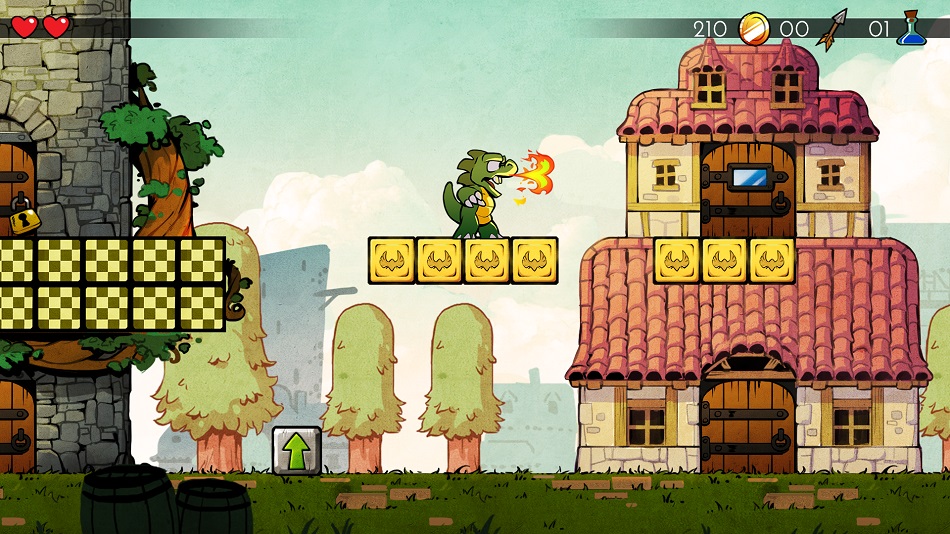 HIGH Finally making it through the hidden dungeon in the desert.

LOW Getting stun-locked by Mummy Dragon over and over again.

While other remakes and throwbacks have featured 8-bit characters or levels designed to give a nod to classic roots, Wonder Boy III: The Dragon’s Trap allows players to explore an amazingly accurate recreation of the 1989 Sega Master System original, and then with the push of a button, they can switch to a lush, hand-animated re-imagining of same. Flat color backgrounds become lush vistas stretching into the distance, blobs with eyes and teeth transform into beautifully-sketched monstrosities, and an upbeat chiptune soundtrack fades into an light and playful orchestral score.

There are two entire games in Wonder Boy III: The Dragon’s Trap, and it’s an accomplishment that should be marveled at, studied and applauded.

It’s hard to say enough about the visuals. Every character is animated and full of life, from the half-dozen creatures the player can transform into, all the way up to the wide variety of dragon bosses. The attention to detail is fantastic, with every incidental bit of graphical flourish drawing the eye and wowing with the amount of work that obviously went into its construction.

In terms of gameplay, WBIII feels like an 8-bit game, because, fundamentally, it still is one, although the central design is fairly advanced. Instead of separate levels to be explored in order, the game plops the player down in the middle of a hub town and lets them explore at their own pace with soft barriers requiring new powers to bypass, giving the game a Metroidvania feel.

The controls and combat are what one would expect from a direct port of an 8-bit title — jump, attack, and block with shields by not attacking. It’s not particularly complex, but characters move with more realistic momentum than in similar games, which takes some getting used to at first, but ends up giving the platforming a unique rhythm. 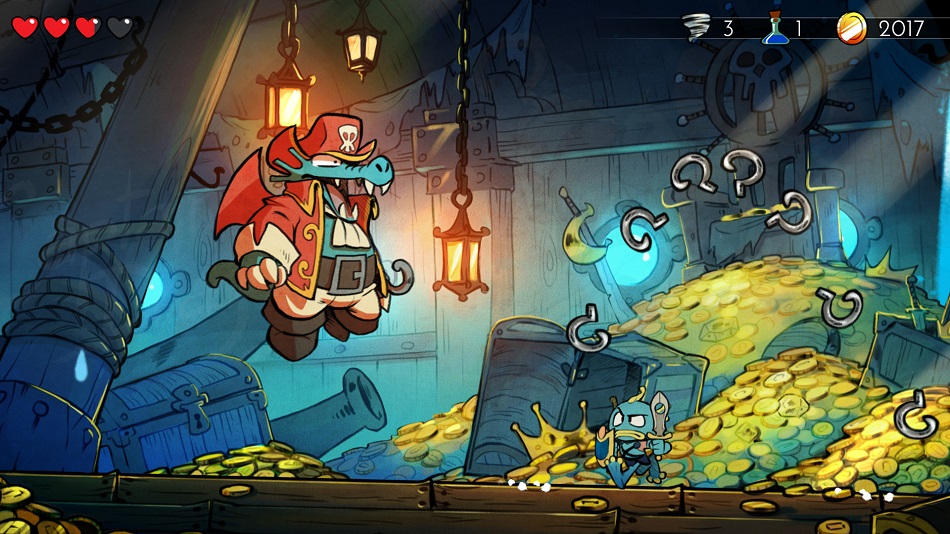 The key mechanics are the ‘curses’ levied upon the character each time they defeat a boss. It’s a playful idea – finish off an area, and be transformed into a completely different character with new powers and limitations. Each area is designed so that only one character can make their way through, ensuring that players will need to learn each new playstyle. Then, they’ll immediately use those new skills to find and unlock new areas and dungeons. Occasionally, players will have to re-explore the world a little to remind themselves where the next objective is, but the game isn’t so huge that it ever feels like a chore.

Every character form has its own set of advantages and drawbacks. For example, the Dragon is immune to lava but has a weak ranged weapon, while the Mouse has the shortest range and a shield that covers its whole body. There are other forms, and players will have ample chances to experiment with all of them during the grinding they’ll have to do to make it through the game.

I wasn’t expecting to farm gold in an 8-bit platformer, but each new character transformation requires its own set of equipment, all of which are fairly pricey. In addition, when players run out of health, they’re tossed back to the starting village if they don’t have a potion. These potions aren’t convenient to buy, so players who aren’t immensely skilled will find themselves forced to kill the same monsters over and over, hoping they’ll drop enough medicine and single-use magic powers to get through challenging dungeons.

While the grinding isn’t great, the only truly questionable thing about the design is the way damage is handled. Whenever the player gets hit, they’re staggered and made briefly invincible – nothing wrong there – but while invincible, they can be struck and staggered again, which can lead to a chain effect of enemies bulldozing the player around the screen. It’s a weird misstep in an otherwise tightly-controlled game, and it’s most noticeable during boss fights. Almost all of the enemy dragons have charge attacks, and watching them shove a blinking player character around the screen gets old, fast.

Wonder Boy‘s developers are making the argument that good design is good design no matter how old the game is, and if it takes a fresh coat of paint to make people realize that, then so be it. Yes, The Dragon’s Trap is one of the best-looking 2D sprite-based platformers ever, but beneath that gorgeous exterior is a fundamentally well-built adventure platformer. All the player needs to do to prove the truth of that statement is tap one button and discover just how good gamers had it twenty-eight years ago. Rating: 8 out of 10

Disclosures: This game is developed by Lizardcube and published by DotEmu. It is currently available on PC/PS4/XB1/NSW This copy of the game was obtained via publisher and reviewed on the PS4. Approximately 8 hours of play were devoted to the single-player mode, and the game was completed.  There are no multiplayer modes.

Parents: According to the ESRB, this game is rated E and contains mild cartoon violence, tobacco reference. This is completely harmless fantasy violence. Yes, there are some undead mummies, and a somewhat saucily-attired nurse, but by and large this should be fine for children of all ages. The tobacco reference is a cigar-smoking pig shopkeeper. As I said – essentially harmless.

Deaf & Hard of Hearing Gamers: There are no significant audio cues that will affect your gameplay.

Great review! One question though:

I think it’s just a function of the game being both Wonder Boy and Wonder Girl this time. All of the other creature-people are visually gender neutral, but since they let players choose either a male or female avatar, they decided to change up the one obviously male-coded 8-bit figure to a female-coded modern figure, so players would have the same choice as they do at the start of the game.

Hey Dan,
Thanks for your review. I was wondering, can you play this game in local co op? And also, ị am looking for a game for my four year old son to introduce him to gaming, would this be suitable or is it too difficult?
Jay

Sadly, it’s a single-player only game. As for the difficulty level, it can be quite taxing at times – the momentum that the characters move with can prove tricky. The controls are easy to learn however, with just a jump and attack button, so it may be a good game to gradually learn.