Tarnished Knights of the Sky 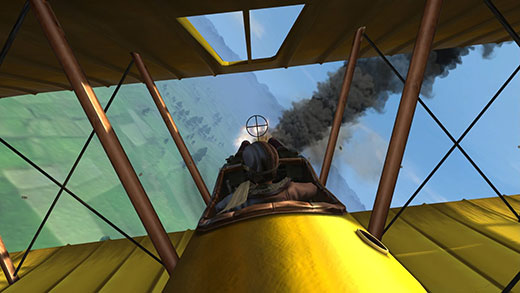 HIGH Watching a dreidekker fall to pieces and spin out of sight just in time to keep me from crashing into it.

LOW Playing essentially the same mission for the 85th time.

WTF How is strafing still this bad twenty years later?

I will admit to nostalgia playing a large factor in my interest in Wings: Remastered Edition. An Amiga owner in my youth, I was extremely familiar with Cinemaware's games, and Wings had been one of my favorites. Its 3D dogfighting seemed revelatory at the time, and the way the game switched between three different graphical styles for its various modes was the kind of innovative feature that few titles could compete with. Now, a new iteration of Cinemaware has re-released wings with modernized graphics and… no other enhancements. The fact that it's essentially the same game I played 20-odd years back gave me a chance to look critically at something I'd loved long ago, and while I realize that Wings is certainly an endearing title, there are fundamental problems that keep it far from greatness.

It's rare that I find myself criticizing a game for being too long, but Wings achieves that rare distinction. A World War I dogfighting simulator with strafing and bombing minigames, Wings puts players in the cockpit of a Sopwith camel tasked with shooting down German planes. The vast majority of missions place pilots in the skies above France in wood and canvas planes machine-gunning their opposition without the benefit of modern technology. Even parachutes hadn't been popularized yet—the pilots of crippled planes were expected to bring them to the ground in as few pieces as possible.

It's in these dogfighting sequences that Wings offers its best experiences. The roaring engine, whipping wind, and chattering machine guns create a convincingly thrilling atmosphere. The lack of radar or status bars gives players a chance to feel a fraction of the terror that actual pilots might have had when swinging their head around to search for any sign of the tri-plane that just disappeared from their sights. Playing just a few at a time—missions only ever last around 90 seconds—the visceral thrill of dogfighting can be fairly compelling. Any more than that, however, and the frustrating sameness of the dogfights begins to grate.

Every mission opens the exact same way—two lines of fighters heading straight for each other at equal altitude. The only variable comes with how many fighters are on each side. That's simply not enough differentiation to keep the game from feeling like it's asking players to do the same mission over and over and over again. Once in a while things are mixed up when the game calls on players to attack or defend bombers or balloons, but those missions are few and far between, with simple dogfights accounting for more than half of the game's 200-plus missions.

The minigames, bombing and strafing, also vary wildly in their quality. Bombing missions are set up as a sort of puzzle—players are shown a picture of a target and then expected to remember which specific building or bridge they're supposed to bomb as they fly over an area from a top-down perspective. They're a mildly entertaining diversion and never wear out their welcome, which certainly can't be said for the strafing minigame.

The strafing is every bit the frustrating slog it was in its original form. Players view a road from a three-quarter perspective as they move their plane around the screen shooting trucks, tents and infantry. By far the most annoying part of the game, the developers have made it bafflingly difficult to figure out how to shoot infantry, while making those same soldiers crack shots when it comes to plinking planes out of the sky. As more and more infantrymen show up in later missions, I found myself doing exactly what I had done all those years ago—just accepting that I was going to lose every strafing mission and allowing my plane to get shot down as quickly as possible to keep things moving along.

Then there's the game's advancement system. Every newly-created pilot is given a few points to mete out between a variety of skills. These affect how much damage they do, how many bullets they can take, and whether or not their guns jam—all vitally important things but the game is frustratingly oblique when it comes to skill value and improvement.

After assigning points before the first mission, players will never again see their skill bar, and the only way to find out if they're getting any better is to go to a status screen that can only give them a title to describe their skill level—no numbers allowed. The fact the players don't get to assign skill points themselves and aren't even told when skills have improved makes it seem like advancement isn't actually happening. While I'm sure maxing out all of my skills is what allows me to win some of the particularly hairy battles late in the game, because the skills increase so gradually and have no clear effect on gameplay, Wings throws away an opportunity to create the appearance of variety and innovation that the game so desperately needs.

Wings follows air combat from the beginning of the First World War all the way through Armistice Day. By the end of it, I really was completely sick of combat and only continued due to a misplaced sense of duty. In not fixing any of the old design flaws, Cinemaware has done the title a disservice. Games about the early days of air combat are few and far between, and when a dogfight gets really intense, the game accomplishes what it set out to do—there just aren't enough of those moments to make it worthwhile. In choosing to re-create Wings exactly as it was, warts and all, the developers have revealed that on a fundamental level, Wings was always more wart than it was game. Rating: 5.5 out of 10


Disclosures: This game was obtained via publisher and reviewed on the PC. Approximately 18 hours of play was devoted to single-player modes (completed 1 times).

Parents: The game wasn't rated by the ESRB, but contains blood, violence, use of tobacco and alcohol, mature subject matter. There's more than a few nods to the more questionable parts of war in Wings. Apart from the actual combat, players can kill civilians and Red Cross workers if they're not careful—they're penalized for doing so, but it's still in the game. That being said, some of the ruminations on the nature and purpose of war that come up in the diary entries that precede each mission do provide interesting food for thought—and it's not like kids are being taught about WWI in schools, so this could actually be an educational experience for your younger children.

Deaf & Hard of Hearing: While most of the game is wholly playable, your inability to hear gunfire coming from offscreen will put you at a disadvantage, keeping you from being able to take evasive action before bullets start striking your fuselage.