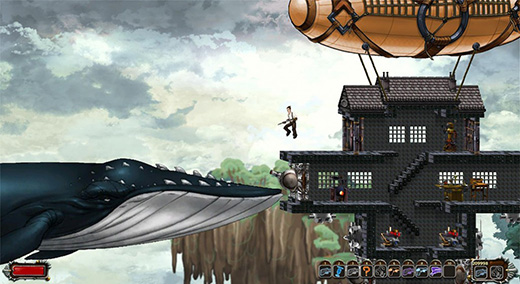 There's a race going on in the world of indie PC games. The goal: To be the developer who manages to take open-world crafting mechanics and use them to build a full game. The prize: Who knows? Probably millions of dollars. I'm not really sure.

Minecraft introduced popular culture to the OWC genre, but the game didn't even have a goal until years into its development. Now that it does, approximately zero people care about that goal, and the game remains the world's most inexpensive set of infinite lego blocks. Terraria moved things in a more structured direction, but it's still fundamentally a game about mining for boss fights. Canadian developers Snowed In have announced their entry in the form of Windforge, an upcoming isometric 2D crafting adventure, which based on the small preview I recently explored, has every chance of becoming the most fully-rounded OWC title yet.

Set in a blubberpunk universe where people live on floating islands and hunt skywhales for the miraculous fuel their society counts on, Windforge takes the basics of Terraria's mining and crafting and expands it to an epic scale.

After a brief tutorial in which the player escapes a crumbling ruin and then repairs their shattered airship, the demo opens up and offers a glimpse at the huge scope of the world built for the game. Armed with a huge, powerful airship, I was free to flit from island to island, blasting away at monsters and harvesting resources en masse. In one of the game's many fun twists on the mining mechanic, I was able to hover next to a mountain and shell it with artillery for half a minute, then hop out of my ship and scoop up all of the stone and ore.

The art design shows a lot of promise. To create the various island worlds, the developers use a facade of repeating textures to suggest foreground, which is then stripped away as the player mines into the surface or explores caves, revealing more and more of the substructure.

I've only seen a few of the creatures the world has to offer, but so far they're rendered with an unusually coherent design philosophy. There are wolves with flying squirrel-style flaps to allow them to glide, giant monitor lizards with ruffling fins that propel them through the air and, of course, the sky whales, who are currently gorgeous although currently under-animated. As of this build, sky whales have no method for ejecting someone clinging to their back, so I was free to shoot it time and again until the great beast finally died and plummeted from the sky, impaling itself on the peak of a mountain. Watching the whale go from a terrifying foe to a mineable resource was at once jarring and awesome, and it convinced me that if the game can provide a few more experiences like that one, the developers will have something special on their hands.

There were a few rough points—I can't comment on the game's story or quests because, as of this writing, it does not contain those things. The physics are also a little floaty at the moment, which has the upside of making the game's grappling hook behave just like the ninja rope from Worms, but the downside of making the combat awkward. A strange choice in the colour palette makes iron and titanium ore look so much like the surrounding rock that it was difficult to track down resources. The biggest problem I had was the lack of an area map, which made spelunking way more confusing than it should have been.

Even considering those flaws, Windforge is already a completely playable, occasionally thrilling open-world crafting game. As the developers add content and polish their mechanics I can see this becoming one of this young genre's high points, so I'll be quite eagerly looking forward to any further news about it.