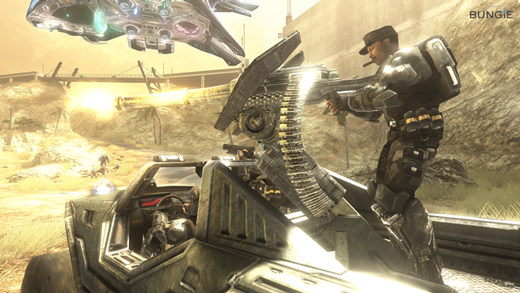 So I finally got around to playing half an hour of Halo 3: ODST last night, and while I'm not planning to write a review of it any time soon, I wanted to comment on the weird experience I had with the game.

I was playing a friend's game, so I just sort of dropped in medias res, and had no idea what was going on plot-wise, so I'm not going to bother commenting on that aspect. What I will say is that for the first fifteen minutes of my playtime I had a blast. So much fun that I couldn't remember why I'd hated Halo 3 as much as I did (by which I mean "not really that much at all").

Why the great experience? I'd lucked into loading up a level that started with an extensive jeep chase sequence. Flipping over a jeep and hopping in was every bit as great as I remembered, and the physics looked and felt wonderful as I dodged through the narrow canyons and rocky clearings, letting my gunner tear through foot soldiers, hovercraft, and tanks alike. Did the Covenant look as silly as ever? Of course they did. But who cares how they look when they're this much fun to kill?

The elation ended after that fifteen minutes was up, though, and I found myself crashing the jeep in a dank, poorly-lit city. Wandering through drab environments, blasting away at silly little clowns with a silenced SMG was immediately tiresome, and I just quit playing the moment I realized that I'd been bored for the same amount of time that I'd previously spent having fun.

Thinking about it later, I realized that this has always been my experience with Halo games. I trudge through and endure the bland FPS sequences until I can reach the dizzying heights of the vehicle sections. Perhaps my recent experiences with the game Wet have coloured my opinions on this, but I've got to ask the question—why is Bungie kidding itself with the FPS stuff? Why do they continue to make us suffer through dull shooting action to get to the incredible vehicle mechanics? 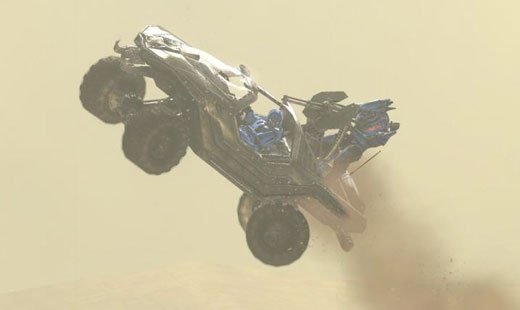 Why don't they just admit that they don't know what they're doing and focus on where their real talents lie—in producing the finest vehicular combat mechanics I've ever encountered in a lifetime of seeking out ad playing every conceivable car combat game ever produced. Everything about the vehicles in Halo just manages to feel exactly as it should. The way Warthogs kick up dirt as they crest hills at high speed, grabbing a little air before they slam back down, their suspensions cushioning the landing. The way hover-bikes skim across the field, drifting around sharp corners effortlessly. The little backslide the Wraith tanks do every time they fire their main cannon… it's all so perfectly conceived, balanced and executed that I've rushed back to every subsequent Halo title solely to see what they'll be doing with the vehicles this time—and I haven't been disappointed yet, especially by the ingenious Brute scrapbikes whose look provided one of the few breaths of fresh design air in Halo 3.

Take an honest look at your games, Bungie, and figure out what's working. If you're not seeing it, I'll give you a hint—don't you think there's a reason that you keep ending games with kickass high-speed Warthog escapes from self-destructing areas? Don't you suspect that you're doing it because you want the last thing the player does in the game to be the high point? Hell, you as much as admitted you don't know how to do FPS boss fights at the end of Halo 3. So why not just play to those strengths, and give us the vehicle combat game we deserve? It's what you're good at, it seems to be what you're interested in, so why not just pull the trigger and create what would no doubt be the finest (hopefully co-op) car combat experience ever produced?

You can even set it in the Halo universe if you want. I even promise not to complain about the candy-coated paint jobs on everything. Seriously, though, it would kill you to put a few dents and scratches on those things? 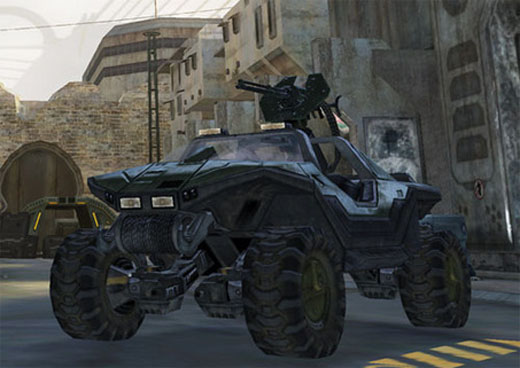 Bungie is a good games manufacturer, what really disappoints me is sometimes the endless firing at the covenant especially on the campaign, but generally you can spice things up with difficulty and skulls if it gets boring. I think bungie is good at games, but i wished they just released games in a logical order instead of rushing them and they released the games like halo 3, ODST and reach with more years in between. this is so people can basically save cash, but also get a feel for the new storyline and gameplay feautres. i think in all that,… Read more »

I especially enjoyed the circle strafing.

[quote=Anonymous]You’re kidding, right? Halo has some of the best and most dynamic fps combat ever. People don’t just buy it for the vehicle sections (although they are fantastic). There are two broad styles of console fps. One where you kill people instantly (COD4 being the obvious exemplar so far), and one where you kill people slowly. The second style is just as legitimate, and Halo is the obvious king. I’d say that your personal distaste for the second style of fps probably isn’t going to convince Bungie in the face of the millions and millions of dollars that they’re making,… Read more »

The vehicles (and fighting against them) are the best part of Halo 3’s multiplayer, so I’d definitely be interested in a vehicle-focused, candy-coated crashfest (assuming I ever buy a 360). Bungie, you’re on notice-make it happen.

It’s not that they don’t put scratches on them, it is just that the warthogs are actually INCREDIBLY FRAGILE. Have you not noticed the windshield explode at the merest whisper?

You’re kidding, right? Halo has some of the best and most dynamic fps combat ever. People don’t just buy it for the vehicle sections (although they are fantastic). There are two broad styles of console fps. One where you kill people instantly (COD4 being the obvious exemplar so far), and one where you kill people slowly. The second style is just as legitimate, and Halo is the obvious king. I’d say that your personal distaste for the second style of fps probably isn’t going to convince Bungie in the face of the millions and millions of dollars that they’re making,… Read more »