No, I Haven't Heard Of Substance. Why? 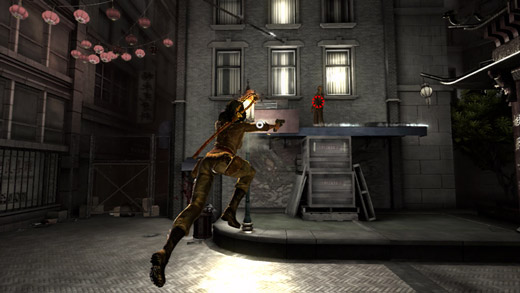 HIGH Sliding into a wallrun into a dive and scoring five headshots in the process is as cool to watch and perform as it sounds.

LOW "Learning" how to use a shotgun for the third time.

WTF Seriously? You put the plot twist in the manual?

I've observed that between 3-4 years into a console's life cycle people start getting a little bored. Graphics have gotten as good as they're going to get, improvements have shrunk from exponential to incremental, and people start wondering what the next generation of consoles is going to look like. It's at this point, the point at which developers start looking for something other than technological improvements to differentiate their games from the crowd that interesting things start happening. It was at this point in the PlayStation's life-cycle that Metal Gear Solid came out, and during the PlayStation 2's "boredom" phase, we were given Shadow of the Colossus. Wet isn't is good as either of those games, but it originates from the same instinct of experimentation that those titles did, and what pleasures it offers are clearly the result of the developers' boredom with run of the mill gameplay.

Wet is a third-person shooter with a simple design philosophy: only give players the good stuff. Where other games make players kill opponents to fill up the power bars that allow them to perform special moves, Wet only has "special" moves to offer. In fact, the game barely even registers kills that aren't made while jumping, sliding, or running along a wall. What differentiates Wet from other acrobatic action games of its ilk like Ninja Gaiden or Devil May Cry is the speed at which all this action is performed. Remember bullet time? This may as well be "Bullet-time: The game". Just how slow is it? See the images accompanying this review? They're actually videos.

The game moves at normal speed during the rare occasions when Rubi (the main character) is just running and jumping around a level's geometry, or shooting a single weapon, but the moment she starts both performing a special action (dive, slide, or wallrun) and shooting at the same time, everything slows to a crawl. Bullets zoom almost visibly towards their targets, bad guys struggle to aim and move as if underwater, and the player has all the time in the world to carefully aim headshots with one gun while the other targets the crowd. This half-auto aiming system does a great job of keeping the game accessible—anyone interested in stylish combat but scared off by the impeccable reflexes required by the Devil May Crys of the world will definitely find Wet far more playable. 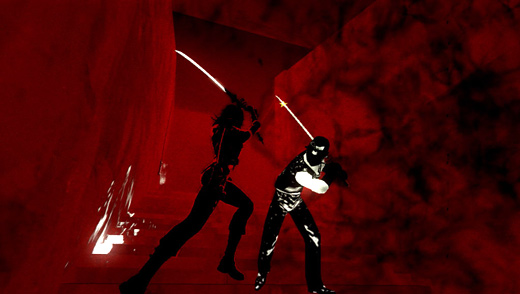 This accessibility comes at a price, though. The game is both very short and amazingly easy, with the constant slo-mo making it feel almost as if the entire game is being played with the cheats turned on. Of course, it's hard to fault the game too much for this, since it's clearly not interested in challenging the player, just providing them with a few hours of action that looks as cool as they can manage. To this end they even include such diverse elements as "Rage" sequences where everything goes hard shapes and primary colours, all Killer 7-style, two expertly-choreographed rail shooter sequences, and QTE-only boss fights. I was especially fond of this last element, since nothing kills the fun of a stylish action game than a boss fight requiring endless repetition and button-mashing.

While the decision to go all-style may not actually be a problem, the game does actually have a couple of those, in addition to its good points. There's the fact that the platforming sections aren't well-designed, often causing problems because the game doesn't make great distinctions about what can and can't be grappled and climbed on. Sometimes the game will know that I meant to jump for the ladder on the other side of the chasm, and others times it just assumes that I was attempting to commit suicide. Then there's a fact that the melee mechanic is completely broken—the entire premise of the game's combat is to go, uninterrupted, from kill to kill to kill, chaining from dives to slides to wallruns and back again. The problem with the system is that any sword attack (which are vital for dealing with close-quarters enemies) stops the combo dead in its tracks, ruining the flow of the game.

Also hurting the game's flow is its weird insistence on unskippable cut-scenes and mandatory training levels. Every time a new weapon is unlocked the game "flashes back" to a training area where Rubi is practicing with it. This is fine the first time, when I actually need to learn the ins and outs of these weapons, but the second and third times through they proved game-breakingly tedious. It's not like the story was so great that it couldn't bear the interruption—a decent voice cast is wasted on a generic script, and, in an act of contempt for the audience unmatched since Clock Tower for the PlayStation, the game's twist is actually revealed in the instruction manual. No, not even the late-game inclusion of a vampire could save this clunker.

Despite those shortcomings, though, Wet's experiment is a mostly successful one. It's a game entirely devoted to appearances, never asking the player to kill people, but rather to kill them as spectacularly as possible. The stylish action genre is a relatively new one, and Wet deserves a place at the top of it, if only because it, with few exceptions, manages to strip everything but the stylish action out of the experience. It might seem odd to celebrate developers getting bored with their jobs, but Wet is a perfect example of people willing to take bizarre chances and go odd directions with a game just to keep things interesting. And I look forward to a few more years of games like this until the Xbox 720, PlayStation 4 and Nintendo Wiii are released. Rating: 7.0 out of 10.

Disclosures: This game was obtained via publisher and reviewed on the Xbox 360. Approximately 12 hours of play was devoted to single-player modes (completed 3 times).

Parents: According to the ESRB, this game contains blood and gore, drug reference, intense violence, sexual content, strong language]. You probably shouldn't let their children play this game. It's extremely violent, foul mouthed, and sexually charged. Of course, if the image on the front of the box didn't tell you all of that, then you're not a savvy enough consumer.

Deaf & Hard of Hearing: Will be fine. The cut-scenes are subtitled and the there are onscreen indicators that reveal enemies' locations when they're shooting at you from off-screen. Since all the game requires of you is to shoot everything in sight, there's nothing audio-related that should hurt your enjoyment.