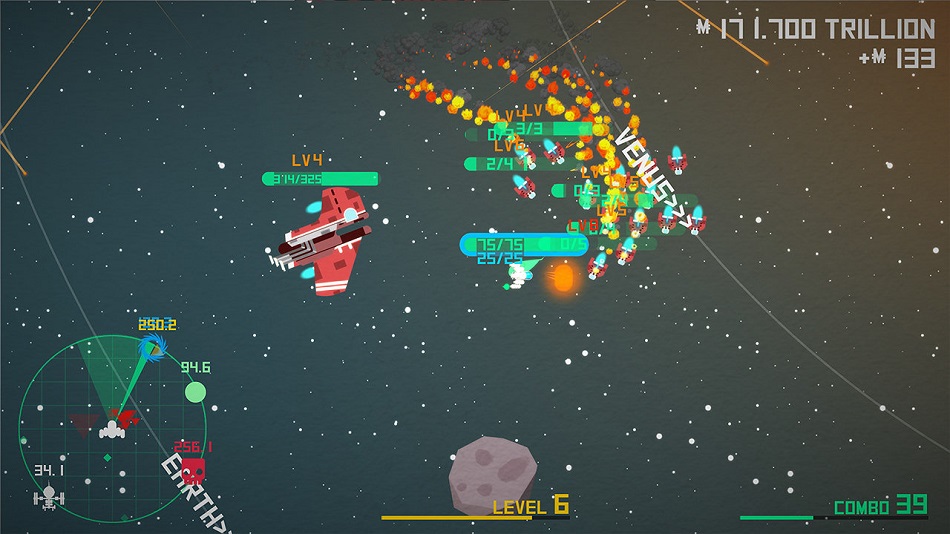 HIGH Levelling up my unicorns until I could wipe out the last boss in five seconds.

LOW Having to revisit all forty planets to earn the final boss fight.

I’ll admit to being a little puzzled by idle games. Like many others, I’m sure. When I first heard of the genre, my initial reaction was ‘it’s a game that you don’t play?’ I understand them a little better now — the idea of a something running in the background, gathering rewards while I’m busy with other things isn’t that outlandish.

Back in the day, I can remember leaving games running overnight to let money pile up, essentially cheating my way to success. Idle gaming is just the developers’ way of saying ‘hey – we know you don’t have time to play games, so simply drop by every few hours and see what’s been accomplished while you were gone.’ I don’t know that it’s a genre I’ll ever dive into, but I was certainly curious to see how it combined with one of the most diametrically opposed genres of game – the twin-stick shooter.

Vostok, Inc. puts players in control of the titular corporation, a terraforming and development concern out to make all the spacebucks that the galaxy can offer. Naturally, every one of the game’s six star systems features a native race that would rather the player not strip all of their planet’s natural resources before dropping a mall where the rainforests were. That’s where the twin-stick shooting comes in. Players guide their space-yacht through the cosmos from planet to planet, fighting spaceships, mining asteroids, and rescuing management teams that can help their bottom line.

The two gameplay styles don’t mesh particularly well. The idle-gaming component is a pretty basic affair – players build facilities on planets that constantly generate revenue to build more facilities, compounding the revenue, which they can use to upgrade their facilities so that each one is more efficient, and so forth. There’s a decent amount of interdependence in the various buildings – having farms make mines more efficient because the miners are well-fed, having a chemical plant makes farms more valuable because they can grow huge animals at record speeds, for example.

The problem comes when players realize the truly staggering amount of micromanaging they’ll have to do in order to produce the results they need to advance in the campaign. Bosses only appear once certain monetary thresholds have been reached, and new systems are only available after existing bosses are defeated. The problem is that each new financial goal is usually a thousand times higher than the previous one, instantly transforming the player’s current fortune into a pittance.

With each new system, another set of expensive facilities are unlocked, the building of which is the only way to make enough money to reach the next goal. Unfortunately, players can’t just dump all of their money into one planet – the cost of buildings increases exponentially, but each one’s revenue remains flat. Since Vostok offers no way to remotely build facilities, the player is forced to return to every single planet they’ve already been to, one at a time, to build the new facilities and then wait for the money to roll in. 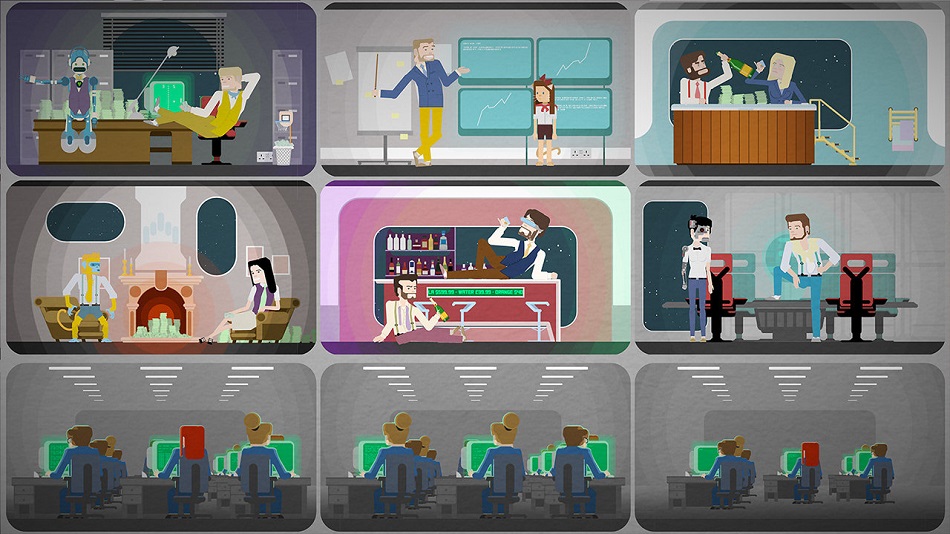 Isn’t the whole point of idle gaming to avoid this kind of micromanaging? Shouldn’t I have a desktop from which I can click on the various planets and handle construction all at once? Why isn’t there a template to build on planets all at once, rather than being forced to buy each individual structure on each planet, over and over again? Why are the construction elements so fiddly? Shouldn’t that be the thing I breeze through in a few seconds before returning to the space combat while my cash rolls in?

Adding insult to injury, the devs have made it so their entire building and revenue mechanic can be largely ignored.

While the player flies around space, managers pop up every minute or two, needing to be rescued before their air runs out. There are four types, and each provide different bonuses. However, only one is relevant — the ‘investor’ that doubles the player’s on-hand cash.

As anyone familiar with basic math will realize, doubling is an incredibly powerful force. It’s easy enough to build up to a million spacebucks in the game, so then find 40 investors with just a few hours’ work and players will have a quintillion spacebucks, which is nearly enough to summon the final boss. Making that same amount through the revenue systems would take days of letting the game idle in the system tray while players do something else – and sadly, Vostok doesn’t even use the computer’s clock to calculate revenue while it’s closed.

On the bright side, the twin-stick shooting action is incredibly solid. Each system has its own variety of foes with unique themes and attack types. The weapon-crafting system is a thing of beauty, allowing players to customize their own weaponry, creating anything from a deadly tractor beam to a herd of rampaging laser unicorns. Also, the writing is extremely funny – the cheerful amorality of the player’s lead henchman is consistently hilarious, as are the descriptions of the technologies and structures that players can use to transform each unspoiled Eden into a grey habitat for consumers to overrun.

If the developers had managed to tie the idle and construction mechanics to the twin-stick gameplay, Vostok, Inc. might have been something special. Unfortunately, this violent clash of systems renders it a near-failure despite the winning sense of humour and engaging action. Although ‘half the game is bad, but luckily you don’t have to play it‘ may be the most damning-with-faint-praise statement I’ve ever made, I’m still going to make it here. Rating: 5.5 out of 10

Disclosures: This game is developed by Nosebleed Interactive and published by Badland Games. It is currently available on PC, PS4 and XBO. This copy of the game was obtained via publisher and reviewed on the PC. Approximately 85 hours of play were devoted to the single-player mode, and the game was completed. Although, technically, the game was idle for the vast majority of that time, which is kind of the point. There are no multiplayer modes.

Parents: This game was rated E10+ by the ESRB, and contains Fantasy Violence and Mild Language. While the game’s action is fairly tame, the comedy can be a little on the edgy side – it’s a game about horrible capitalists colonizing new solar systems, driving out the inhabitants and stealing their planets. It’s a bright and silly experience themed around some very dark content.

Deaf & Hard of Hearing Gamers: There are no audio cues of note! It is fully accessible.