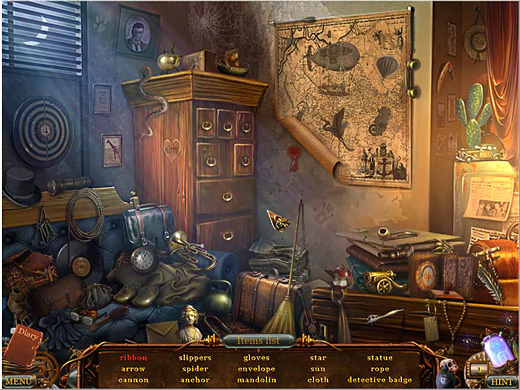 LOW Figuring out which vase the game wants me to click on.

WTF What exactly, is a Liana? And what does it look like?

Up until a few months ago, I'd never actually played a hidden object game. They'd always seemed like the bailiwick of bored people at work looking to kill time while waiting for a phone call. My naive habit of horrible target audience stereotyping ended when I actually played one of these games on a whim, and was shocked to discover an incredibly good game—one that mixed hidden object hunts and puzzles seamlessly into a compelling narrative that pulled me inexorably towards a thrilling conclusion. Voodoo Chronicles: The First Sign

isn't that game, but at least my eyes were opened before encountering it. If not, i would have likely missed out on nice little casual title.

The biggest challenge with reviewing a hidden object game is figuring out exactly what critical framework to use. Obviously it's largely a puzzle game, one that owes its origins to "spot-the-difference" and Where's Waldo? books, but there are also light action sequences, and a semblance of a plot tying everything together. So, how to approach it? After some (way too much, honestly) thought, I've come up with three criteria that, when judiciously applied, can be used to determine the quality of a hidden object game.

The game suffers a little from this phenomenon. It's always a challenge to come up with reasons for areas to be littered with random objects that have to be sorted through, and Voodoo Chronicles does better than most. The settings do include a ransacked office and crashed airship, so there's sometimes justification for the strewn goods. Still, there are far too many instances of "random object thrown in for no good reason" to give the game a pass. Especially egregious are the too-frequent appearances of bizarre scaling problems with objects. I think it's fair to expect item sizes to be fairly consistent—if I'm asked to look for a "pitchfork," I don't expect the game to mean a tiny utensil dwarfed by the sawblade lying next to it.

Only partially. The game follows the standard HOG trope of asking players to find a specific plot-related object in a given area, but then also forcing them to find twenty other random objects simply to pad out every puzzle screen. This is so common that it's almost foolish to complain about it, but it can be done more elegantly, and I'd appreciate it if more developers took the effort and stretched themselves in that direction. That way players won't find themselves asking why—while escaping from an underground prison—they need to find a pillow, basket, and monkey.

This is hardest-to-quantify category, but also the most important. When it comes right down to it, this isn't a Where's Waldo? book, it's a game with a narrative, and as such I'm forced to ask how well the gameplay serves that. In this case, it actually works fairly well. Except for a bizarre endgame sequence, the puzzles and object searches all fit the mystery tone extremely well. The story is considerably less well-handed. While it's an effective enough over-the-top adventure, the decision to reveal the solution to the mystery in an opening cinema sequence is baffling at best. When I'm playing as a detective tasked with solving a high-profile mystery, I'd rather the game didn't tell me who did it and why in the first 90 seconds. Perhaps that's just me.

The game also has a few minor sticking points. A few of the object-based puzzles are on the non-intuitive side (the in-game guide that comes with the deluxe edition is quite useful), and the game can be oddly cavalier with language for something that largely depends on precision and specificity. The list of objects has a bad habit of using bottle, vase, and jar interchangeably—and when the shelves are filled with all three, figuring out what I'm supposed to click on becomes a challenge. The game also has a few odd translations—it took me more than a minute to discover that when the game said I needed to click on a "beam" it meant a pile of logs.

Despite these minor flaws, Voodoo Chronicles: The First Sign

fulfilled my criteria for a quality HOG handily. While it may not be near the top of the genre, it's certainly a pleasant casual title. Easy on the eyes and just challenging enough to keep people from getting bored while waiting for that phone call. How much more can one ask from a Hidden Object Game? Rating: 7.0 out of 10.


Disclosures: This game was obtained via publisher and reviewed on the PC. Approximately 6 hours of play was devoted to single-player modes (completed 1 time).

Parents: According to the ESRB, this game contains mild violence, mild language, blood. Despite the warnings, this game is fairly tame. There are a few murders to investigate, but they're anything but graphic, and won't scar any but the most sheltered children. There are also a few alcohol references that the censors missed, but nothing severe or dangerous.

Deaf & Hard of Hearing: It's a Hidden Object Game. Of course there are no vital audio cues.

the game will not let me click on the footprints in one of the hidden object scenes. I used all 15 hints that I had to show me the exact same thing that i knew was the right thying to begin with, but i can’t get past it. I think my game is defective. I’ve definitely played my share of hidden object games, so i know the problem ios not me. What do i do?????