A Fresh Bit of the Past 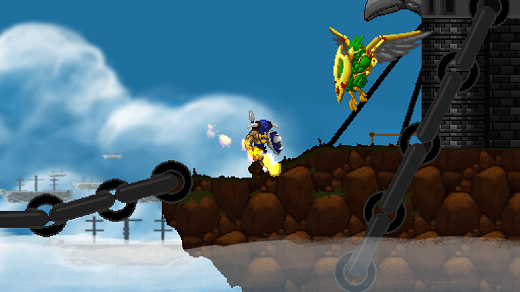 LOW How did the zoomed-in camera mode wind up in the game, let alone as the default setting?

WTF The boss fight that results in Ending B.

Who would remake Rastan? Who can remember Rastan?

A Taito game from 1987, Rastan followed the adventures of a barbarian as he slaughtered lizard men, collected treasure, and attempted to avoid being sued by the rights holders of Conan.

While fairly high-quality by the standards of the time, Rastan has never been a figure of great nostalgic appreciation, so I was surprised when I booted up Volgarr the Viking and discovered that the game opened with a re-creation of Rastan's first level—the developers freely acknowledge their inspiration by going so far as to place the skeleton of that game's hero in the background of a cave.

Whether it's called theft or tribute, Volgarr's developers have taken Rastan's aesthetic and gameplay, added a dash of Castlevania, then put in enough of their own ideas to keep this from being a mere pastiche—elevating it to something which has the look and feel of a classic arcade platformer while still possessing an entirely modern soul.

Volgarr the Viking puts players in charge of the titular character as he embarks on a quest from Odin to rid the world of a particularly bothersome Dragon. This journey covers five different worlds, each with its own complement of traps and monsters.

Gameplay is a simple, brutal affair, with players susceptible to one-hit kills unless they can find some armor or a God's magic favor. They have only three attacks at their disposal—a sword swipe, a double jump to kill airborne enemies, and a thrown spear which doubles as a way to build platforms for exploring levels.

Rendered in a blocky pixelated style, Volgarr manages to capture the mood of late 80s video game art without ever seeming primitive. Both Volgarr and his foes are so well animated that no one could ever mistake this game for one of the titles that it's referencing. This is an especially impressive feat because of the wide variety of enemies in the game. Whether it's the suicide cultists on the volcano level or the multicolored frogmen that plague the sunken city, for the entire length of the game Volgarr is consistently being challenged by new monsters, each of them exquisitely rendered in low-res splendor. 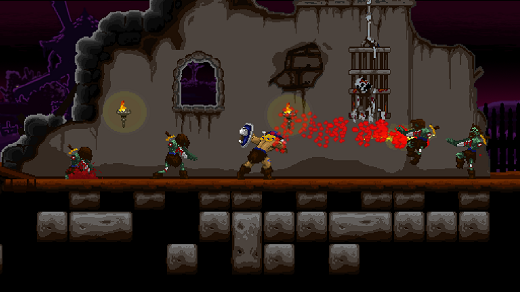 Volgarr goes out of its way to make its difficulty a selling point, and try as I might, I can find no real flaws with their level design and trap construction. Yes, players will die a lot as they learn how to play the game, but there are no unfair deaths nor unexpected enemy behavior. Every monster and boss has a set pattern that can be learned and overcome.

Likewise, every platforming section can be conquered with precisely-timed jumps and careful spear placement. This isn't a Ghosts ‘N Goblins situation where a red demon will show up and do whatever the hell it wants—so long as players pay close attention to their surroundings and switch the camera from the patently unfair zoomed-in view to the wholly reasonable zoomed-out, almost anyone should be able to make it all the way to the end of the game without too much trouble.

Volgarr's most interesting innovation over its predecessors is the manner in which it chooses to reward skilled players.

While classic arcade games could only offer high scores, Volgarr essentially hides an entire second game for those talented enough to uncover it. Each of the six worlds consists of two stages that can be traversed in 2-3 minutes each. Normally, players have unlimited continues at their disposal allowing them to trial-and-error their way through, eventually beating the game through sheer stubbornness. The players who manage to make it through and find treasure chests without being hit by enemies are rewarded with key items that unlock alternate versions of the worlds. These aren't just harder versions with more monsters and extra flying skeletons, these are entirely new maps representing a wholly different and far more difficult path. It's an amazingly satisfying addition to the game, especially once a player practices enough that they can beat all five bonus worlds and unlock the game's true ending.

Volgarr the Viking is an amazing accomplishment. Its developers have taken the skeleton of a classic title and transformed it into the greatest game the 80s never produced. The best pieces of the best games have been cherrypicked to make something greater than the sum of their parts, and anyone with an appreciation for the history of video games has no excuse for missing this title. Rating: 9.5 out of 10


Disclosures: This game was obtained via paid download and reviewed on the Xbox One. Approximately 8 hours of play were devoted to single-player modes (completed 3 times).

Parents: According to the ESRB, this game contains violence, blood, suggestive themes, use of alcohol. It's pretty bloody for a T-rated game. Many, many characters are killed by exploding into a pile of blood and bones, most bosses die via beheading, and there are some fairly disturbing-looking zombies filling one of the levels. Also—spoiler alert—vikings like drinking beer. I don't know that it's going to affect even impressionable kids much.

Deaf & Hard of Hearing: You're completely safe. There are no gameplay-relevant audio cues.

Definitely in agreement with this review. However i do have to knock the game somewhat for the water-levels. While beating these unscathed is quite an accomplishment, i think they drag on _far_ too long. I appreciate that they want to mix up the gameplay a little, but the slow movement-speed and “floaty” controls in that section really bummed me out. Also, after getting the true ending i wanted to do some speedrunning and climb the leaderboards, but the GOG version does not support this (for shame!). Oh well.

“”How did the zoomed-in camera mode wind up in the game, let alone as the default setting?””

Uhm, the zoomed-out camera is basically a build-in cheat implemented for the weaker players. No offense.

I’m sure that’s true, and it’s also an example of terrible design. If the developers thought the zoomed-in camera was fair and a good idea, they would have left it close for the boss fights. The fact that they don’t is proof enough that they understood they’d made a mistake. The game has so many things that leap in from off-camera that playing with the default camera setting is more an exercise in memorization than skill and reflexes. The camera settings are the difference between being Castlevania and Sonic – you’d have to be crazy to want to be more… Read more »