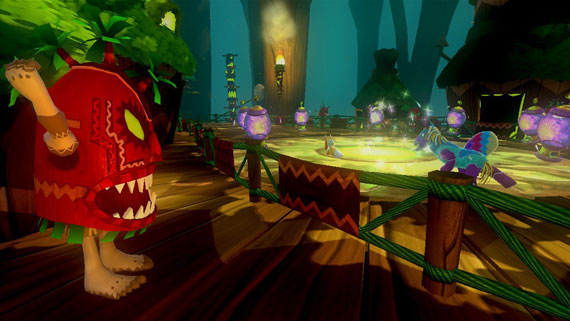 If it accomplishes nothing else, Viva Pinata: Party Animals shows that someone, somewhere in the hierarchy at Microsoft understands the importance of attempting to expand their user base.

The first follow-up in what I can only assume will be a long series of titles, Party Animals takes the various animal types that were introduced in Viva Pinata (and given names in the cartoon) and puts them in a Mario Party-style context. Four players can control these adorable pinatas in a variety of events, from races to eating contests to, in a surreal twist that threatens to cause the world to implode in a singularity of self-referentiality, a pinata-breaking competition.

That pinata-breaking competition is what makes this demo stand out so spectacularly, representing a new direction for the franchise. The pinatas that get swatted aren't anthropomorphized animals that scream in pain before exploding in a burst of candies, but rather simple circular things that don't seem to have any semblance of conscience. That one move is a perfect encapsulation of the change in tone this game represents. If the demo is to believed the winking bawdiness and casual brutality have been removed from the Viva Pinata franchise, leaving something far more innocent, youth-appropriate, and perhaps most importantly, in line with the theme of the cartoon.

The best thing about the demo, though, is the fact that there's so much of it to play. After trying seven minigames in sequence as the game kept track of the overall score, I was left with the feeling that I'd actually enjoyed a full game of Party Animals, something that few demos ever manage to accomplish. Is the product incredibly derivitive or Mario Party? And how. But as rip-offs go, it's technically accomplished and a breeze to play. If the final version is anywhere near this good, there might finally be something that entire families can play on the Xbox 360. Well, something that wasn't downloaded from Xbox Live, anyhow.

I know that this is not the correct forum for this.

Haven’t spoken to you in years. Will continue to hold drafts of your first novels hostage until you get in touch with me.

Pinatas breaking pinatas is silly enough to make me want to play the game, which would be a serious expansion of the user base, as I don’t even know what those consoles look like these days.

This may be the wrong place for it, but I just stumbled across your review for Fable. I have never read such a complete load of crap in any one single game review ever. Honestly, 4/10 for that game. Thats just appalling. To say its below average is farcical. The game IS good to play, it IS above average. Please never waste internet space with a review again.