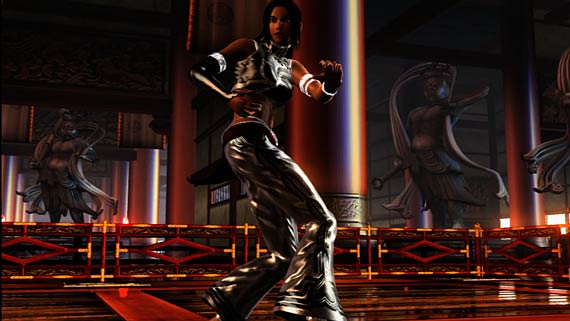 Virtua Fighter spits in the face of convention. Well, since it's a fighting game, I suppose it actually punches convention in the face. While games try to move more into the mainstream, their difficulty is constantly being scaled downwards, with infinite lives, time reversing tricks, and constant checkpoints becoming the norm. Heck most games even feature QTEs these days, which allows developers to include incredible, larger-than-life action without figuring out a way to let the player actually control said action. This move towards user-friendliness has all but killed the fighting game genre, as the increasingly short attention spans of the videogame playing public just aren't up to the kind of dedication they require. After all, at a time when few games last more than ten hours, it takes ten hours just to become passably skilled at one of the Virtua Fighter's eighteen characters.

Yet another in the long line of VF titles, Virtua Fighter 5: Online makes very few changes to the formula that has kept the series alive. One of the greatest examples of design stagnation, beyond the graphical improvements that herald each game in the series, and the occasional new character, there aren't many changes from edition to edition. This is practically the same game as VF4: Evolution, except slightly more complex and daunting, and progressively more insular, as all VF's have been since blocky, low-res characters started flailing at each other back in the mid-90s.

This far in, things are down to a formula, and Virtua Fighter has reached a point where any seeming flaws in game design have earned the right to be called 'choices'. The incredibly precise timing required to do anything but the simplest punching and kicking combos now classify as demanding, rather than cruel. Asking players to memorize dozens of moves that are performed through the use of just three buttons and eight stick directions is now a well-established fact of the franchise, so mechanics that would be laughed out of a design meeting today are included without comment. Grandfathered in because they appeared in an earlier installment. 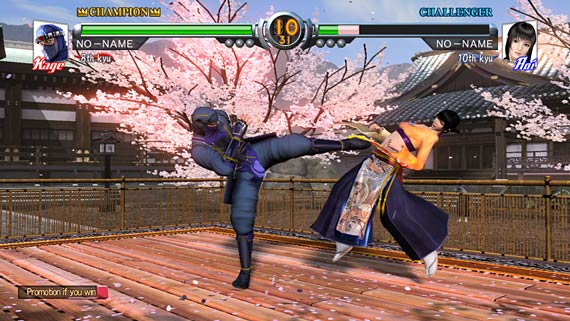 Perhaps the strangest and most alienating thing about Virtua Fighter 5 is that it has to be learned over and over again. While the basic moving and striking controls are constant between characters, each one has a completely different fighting style with no moves in common. Learning one character doesn't give the player anything but the slightest toehold towards learning the rest. This is problematic because being able to hold one's own in a fight means that players will need a fairly good grasp on their opponents' moves as well as their own. For example, in order to escape from a throw (a vital skill), the player must not only be able to visually recognize which throw their opponent is using, but also know how to perform that throw. Playing the game by doing anything but button-mashing requires a serious investment of time and effort.

To be fair, the game goes a long way towards easing players into the system. Where most games offer a story mode, VF5 features a single player Quest mode. Instead of literally playing as one of the characters, the player controls a person living in Japan, who travels from casino to casino, trying their skills against other players. This entire quest acts as a kind of extended training mode for the game. Starting out at the lowest rank, the player can gain experience only by fighting opponents within a few ranks of themselves. This ensures that the player will gradually be taught how to play, rather than throwing them to the wolves right away.

The enemy AI does a fantastic job of training the player through combat. At the lowest levels of experience, the enemies can do little but slowly advance and throw the odd punch or kick—knowing one good combo can take the player through the first five or so experience levels. Slowly the computer introduces new moves, and gets better at defending and dodging the player's attacks, forcing the player to learn new combinations, and better defense skills. It all happens so gradually that a player might not even realize they're improving, but anyone who completes the six-hour quest mode will find themselves more than ready to play strangers over Xbox Live, or in their local arcade (assuming it hasn't gone out of business). 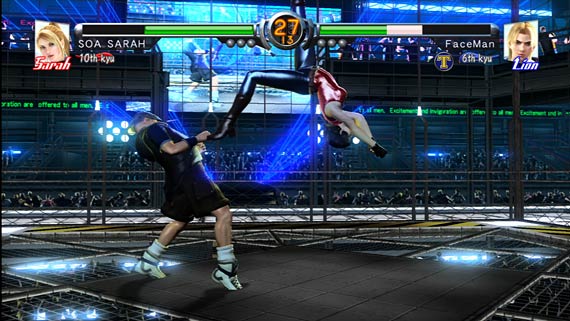 As for the production values, the game looks fantastic. Hair flows, clothing flops, water waves and splashes. The stages look equally good, and are full of destroyable walls and floors, so whenever someone's receives a particularly nasty hit, there's a satisfying crunch from the environment. There are a couple of weak levels—one featuring a valley looks oddly two dimensional, and a field of snow that players fight on looks downright terrible as it's uniformly flattened by footsteps. By and large, though, the game looks exactly as good as one would expect a Virtua Fighter game released in the year 2007 would.

The massively increased realism in the graphics does have an oddly disconcerting effect. Now that the fighters look like people and the backgrounds look like places, the more fantastic elements of the game have begun to look more and more out of place. So much effort has been put into making the fighting styles look authentic, but little thought has been given to making the Virtua fighting a little more virtual. For example, when a character is thrown to the ground, they take damage, but when they receive a nasty punch and flop to the ground, they don't. The huge jumps that plagued early versions of the game have been largely removed, but damaged players still have a nasty habit of hanging in midair, just waiting to be 'juggled', i.e. causing them to hang in the sky by punching them over and over again. Obviously the game is meant to be exaggerated, but when a ninja attacks someone on the ground by diving headfirst into their belly, it strips away whatever authenticity the game had going for it.

Virtua Fighter has been successful as long as it has by catering to an audience that could serve as the definition of the word hardcore. Although the manual claims that there's an elaborate story going on behind the scenes, there's not a trace of it to be found the game—no intros to entice players, no endings to satisfy them. It's a fighting game stripped down to the most basic elements. It's almost as if the developers don't have the slightest interest in attracting new players. I'm sure they're turning a profit; according to the credits, the game is made by a shockingly small number of people, and it has a long life in the remaining arcades, but I can't help but wonder how long a series can last with a static user base. Viruta Fighter 5 is a great Virtua Fighter game. As with most series that have lasted long as it has, now it can only be judged by its own criteria, and how it stacks up to previous entries in the series. Considered in that light, it's a great game. Perhaps the greatest game that almost no one will ever want to play. Rating: 9 out of 10