According to ESRB, this game contains: Suggestive Themes, Use of Alcohol, Violence 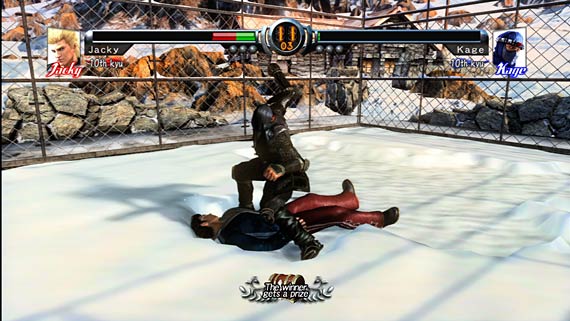 Parents don't have much to worry about. Naturally, there's violence, but it's relatively sedate and bloodless—more like watching a martial arts demonstration than an actual fight. The 'suggestive themes' refers to the fact that a number of the women's costumes are a little on the risque side, but it's never more salacious than a bikini top. The alcohol use comes in the form of a Drunken-Style fighter, who must take swigs of alcohol to perform more elaborate moves. Sure, that's a little more questionable, but it's broad and unrealistic enough that it can't be taken seriously.

Virtua Fighter fans who want to take their game online will find themselves able to jump right on and fight strangers all over the world. The one drawback is that there's no way to judge the skill of the person you're going to be playing. In all my games, I never fought anyone at my skill level, the fair-to-middling range. No matter how many times I tried, my fights tended to split 60/40 me being utterly destroyed/me utterly destroying someone.

Deaf and Hard of Hearing gamers can game in utter equality. There's no story, no dialogue, absolutely nothing that you need to hear to play the game. Half the time I play with the sound off and have never had the slightest problem.