The First Casualty of War Is Truth

LOW Defending the same valley for the 32nd time.

WTF Who thought it was a good idea to give me limited ranged weapons when fighting an airship?

Valkyria Revolution is unusual in its willingness to address the morality of war. It’s a subject that rarely comes up in videogames, except for that one time a developer had the guts to ask ‘what if the Army sent a hallucinating idiot to Dubai hoping things would go well?‘ The key question being posed here is a little more universal — at what point is an offensive war morally justifiable? Is it possible for one side of a war to be the ‘good guys’, or is morality, in the final analysis, only determined by who survives long enough to write the history book?

This history is the game’s central focus. Players are introduced to VR‘s world via a framing device in which a history teacher is discussing the ‘Liberation War’ of a hundred years earlier and the ‘five traitors’ who started it, winding up executed by the government for their troubles. Through the professor’s stories, the player engages with the true history of the war, learning the secret motivations behind the ‘villainous’ actions of the main characters, giving depth and meaning to their actions while not necessarily justifying them.

An action-RPG, VR uses a hybrid real-time combat system that allows players to move, dodge, and block in real time, but requires them to wait for an action bar to fill up before they can attack or order one of their teammates to strike. It’s a slightly awkward system to use – there’s a disconnect between the ability to freely run around while being unable to swing a sword – but once players get accustomed to its quirks, it plays smoothly enough.

Between missions, players are given the opportunity to walk around town listening for gossip about the war, to get to know their teammates better, or to spend money and resources upgrading their weapons. It’s here in the downtime that the game shines. The writing is high-quality, maturely grappling with friendship, sacrifice, duty, and betrayal. Amleth, the main character ( and one of the previously-mentioned five traitors) has to deal with some severely divided loyalties over the course of the story, and it makes for great drama. 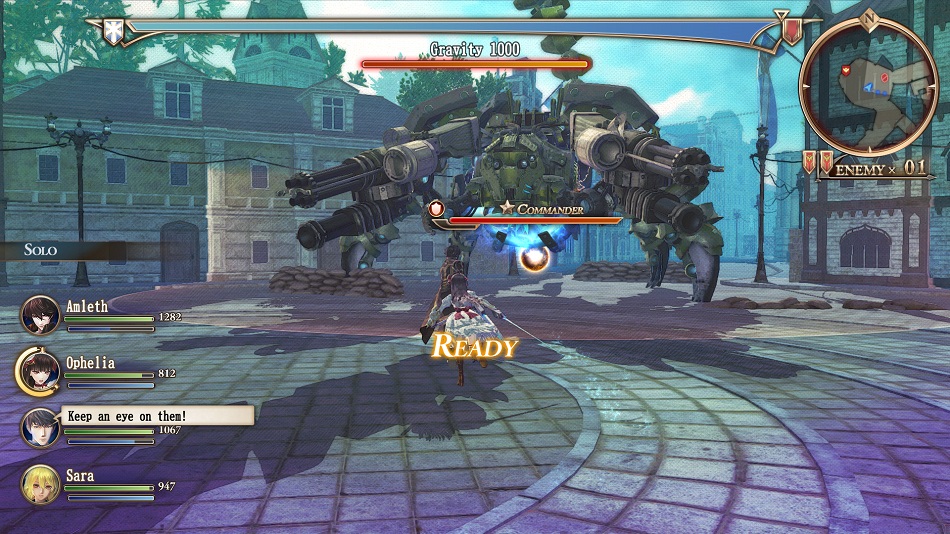 One of VR‘s most impressive achievements is the way it delves into the role that marketing plays in waging war. There are numerous fascinating discussions on the subject, in which they explore the way each country spins its successes and failures and how the public perception of war is arguably more important than how the actual battles are going. The best example of this is the naming of military special forces unit that the player controls. It’s common knowledge in the world of VR that the villainous Ruzi Empire has a Valkyrie on their side, and are therefore unstoppable on the field of battle. So, the heroic Jutlanders publicly announce the formation of an ‘Anti-Valkyria Squad’, giving the country reason to believe that they can win a war against their oppressors. The fact that they have no idea how to defeat a Valkyrie is of secondary importance – what matters is getting the people of Jutland on their side.

Sadly, a stellar story is about all the game has going for it. While the combat is serviceable, the mission structure is absolutely not. There’s a severe limitation in enemy types – swordsmen, riflemen, and snipers – and that’s about it, save the occasional walking tank or mechanical scorpion. While the colors of the enemy uniforms change over the course of the campaign, the tactics required to defeat them don’t, and the vast majority of missions require the player to do nothing more than defeat a set number of troops across a relatively compact map.

There’s just enough variety to keep the main missions interesting, and the boss fights against unique giant mechs are a high point. Valkyria Revolution‘s problem is that it forces players to take on side missions if they want to progress. Leveling up characters and upgrading weapons is an absolute necessity, and players will earn only a fraction of the resources they’ll need in story missions. This means they’re forced to run through constantly-respawning side missions over and over again. Worse, each region of the map has just a single side mission to offer, and it plays out exactly the same every single time.

This gets old, and it gets old fast. The combat isn’t engaging or complex enough to justify the sheer amount players will see if they want to make it all the way to the end, and the game goes out of its way to make grinding more difficult than it has to be – only starting enemy soldiers offer experience points when defeated. The reinforcements they call in are valueless, but still have to be killed to complete objectives. I’m sure this was done to keep players from farming experience and overleveling their characters, but I have to ask if that’s such a crazy strategy when the alternative is to play the exact same level a dozen times.

I can’t praise Valkyria Revolution‘s story enough. It’s a clear-eyed meditation on the horrors of war – even, perhaps especially, ‘justified’ war. If the developers had found a way to make the dreary, repetitive combat as worthwhile as the story that frames it, this would have been an incredible game. Rating: 6 out of 10

Disclosures: This game is developed by Media Vision and published by Sega. It is currently available on PS4 and XBO. This copy of the game was obtained via publisher and reviewed on the PS4. Approximately 40 hours of play were devoted to the single-player mode, and the game was completed. There are no multiplayer modes.

Parents: According to the ESRB, this game is rated Teen and contains Blood, Language, Sexual Themes, Use of Alcohol, and Violence . It’s a pretty mature story about the nature of war, and a bleak look at its effects on the people who wage it. The sexual themes can be a little troubling, though, as they touch on the grisly fate of kidnapped civilians, but this game should be largely safe for older teens.

Deaf & Hard of Hearing Gamers: There are no audio cues and the game is fully subtitled, but those subtitles have one pretty major problem — the game never attributes them to anyone in the cutscenes. Whatever line is being spoken is written on the screen and this isn’t a big issue because most of the time players can see who’s speaking. But sometimes, a character will speak from off-camera during a group conversation and it’s impossible to tell who’s speaking. This is needlessly confusing, and could have been resolved by simply putting character names over dialogue.