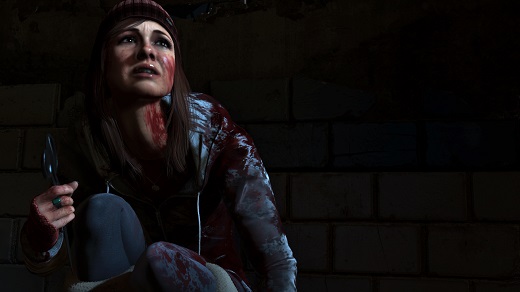 HIGH Finally getting my hands on a shotgun and killing [REDACTED].

LOW The capriciousness of whether Matt lives or dies.

Interactive movies (IMs) get dinged harder than they deserve when it comes to player choice. After all, the vast majority of games are linear affairs—an innumerable number have players moving from cut-scene to cut-scene until credits roll. However, by positioning themselves as stories that give agency in the outcomes, IMs are held to a different standard when it comes to railroading certain situations, and in this regard, Until Dawn falls short. Despite this issue, it succeeds so thoroughly in presentation and player engagement that many, if not all of its flaws can be forgiven.

Until Dawn is never shy about demonstrating exactly what kind of IM it wants to be. Carefully following the slasher teensploitation playbook at every turn, the game opens with a set of twins being killed in a horrible prank gone awry, then picks up the plot a year later when all of their friends/persecutors make the ill-advised decision to return to the site of their mean-spirited prank/horrible crime.

Over the course of one very long night, the player will control each of the game's eight characters as they attempt to solve the mystery of their friends' disappearance and fight for their lives against the onslaught of a terrifying foe.

One of the most impressive things about Until Dawn is how absolutely right it gets the look and feel of its cinematic inspiration. There's an isolated ski lodge that can only be reached by cable lift, an abandoned asylum, and a haunted mine. Although it is a little preposterous that all three of these things could be within 200 meters of each other, the game's developers understand the power of these archetypes in unnerving their audience.

Likewise, all the characters fit nicely into well-established roles: the Jock, the Tramp, the Cad, and so on, yet all are so well-written and well-acted (with one exception of terrible casting) that they never feel like the screenwriters were just checking boxes on the list of things a horror game needed to possess.

Until Dawn's graphical accomplishments are self-evident—not only does it put all other IMs to shame, but the gorgeousness of the characters and locations make me wonder how it ever could've worked on the PS3, as it was originally intended to.

In addition to their skill with the game's looks, Supermassive Games should be applauded for their choice mechanic. Throughout the adventure binary options are offered. During a chase, this might be a matter of life or death. During a conversation it might only affect a few lines in the script later on. The key decisions, however, are marked with a 'Butterfly Effect' visual after they've been made, letting players know that their decision is going to be important later. Until Dawn has a screen entirely devoted to these butterfly effects so that players can track what they've done and speculate about how it's going to resonate as the story develops.

While all of those factors come together to make an enjoyable interactive movie experience on their own, the true power of this genre is in how effectively it creates identification with characters by putting the player in charge of their actions.

For example, there's one person in the game who's horrible by any definition of the term—they're an absolutely unsympathetic monster in every situation, and if I were watching a film version of Until Dawn, I would have been praying for their death. But, when that character was being chased through a crumbling sawmill, I couldn't bring myself to purposefully slip up on any of the Quick Time Events that would've brought them to their end. Whether or not I liked them as a person, my gaming instincts had taken over and I was deeply invested in their survival. That's one heck of a dramatic and stoytelling shortcut.

Unfortunately, there are two major flaws that keep Until Dawn from vaulting to the top of the interactive movie field.

The first is story related, which means I can't go into it without ruining the plot of the game. Suffice it to say that while the script is incredibly interesting and great at drawing players along, once it reaches the end of its twists and turns, it seems that absolutely none of it could've happened the way players are asked to believe it did. The developers want affecting tragedy, but they push it too far and wind up with stunned bewilderment.

The second, and more important problem, is what appears to be a case of taking shortcuts in the development process.

One of the game's central features is the promise that every character lives or dies based on the choices made, and it's completely true that whether or not anyone lasts until dawn is entirely up to the player. The problem arises because the developers have a plot to follow and a final sequence they want to get to, so they can't allow potential QTE failures to throw them too far off course. In practice, this creates a situation where any character who can get killed before the ending is not allowed to be central to the storyline.

Most of the characters get a single, intense QTE sequence which determines their fate, but once it's over, those characters essentially (sometimes literally!) disappear from the story whether they survive or not. The game spends a full three hours at the outset encouraging the audience to know and like all of the characters, so it was frustrating to see people I cared about get discarded because the developers couldn't be bothered to write a bunch of branching dialogue and new scenes. It doesn't say great things about the game's structure that the only thing most successes or failures amount to is whether characters get an extra 20 seconds of dialogue as the credits roll.

From writing, acting, technical and gameplay standpoints, Until Dawn is a great accomplishment, and a must-play for fans of interactive movies. On the other hand, it's frustrating that the developers didn't go a little further to turn it into a truly exceptional experience on all levels. I absolutely recommend the game, but it should only be played a single time—once the surprise wears off, the flaws become too great to ignore. Rating: 8.5 out of 10


Disclosures: This game was obtained via retail store and reviewed on the PS4. Approximately 20 hours of play were devoted to single-player modes (completed 3 times).

Parents: According to the ESRB, this game contains: blood and gore, intense violence, sexual themes, strong language. This game also contains extreme gore, swearing, sex, underage drinking brutal dismemberment, partial nudity. I can't stress enough how much this game needs to be restricted to the target demographic of the films that inspired it: anyone 13 and older. Hopefully you understand that was a joke. No kids.

Deaf & Hard of Hearing: Surprisingly enough, you will be fine. There are no audio cues and everything is extensively subtitled.