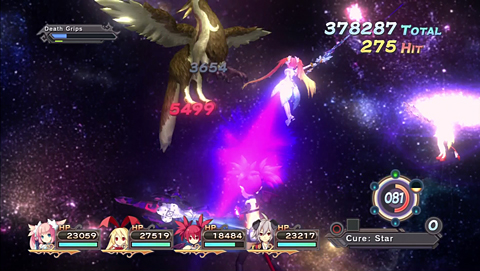 LOW Being buried alive under an avalanche of loot.

WTF An extended debate over whether yelling the name of a special attack increases its effectiveness.

At first glance, it might seem that I'm not the ideal person to be reviewing this title. I have no particular love of the Japanese role-playing game (JRPG) genre, I find turn-based combat largely flat, and I'm not familiar enough with the source material to be able to understand why a scantily-clad space pirate is throwing explosive penguins at people. Despite my near-complete lack of preparation for it, Trinity Universe thoroughly charmed me enough to warrant the triple-digit hours I devoted to completing it.

After choosing which character to control, the game's story begins in medias res as the main character I decided on (a valkyrie space heroine with an appropriately absurd hairdo) arrives at a town set into an asteroid to do battle with its evil king. A quick tutorial later and the king has been defeated, causing all hell to break loose. Immediately the player is tasked with figuring out why space debris keeps floating into orbit around the city, and to prevent it from impacting into it, killing all of its denizens. This is an interesting enough premise that, if played straight, would have been easy to build a compelling narrative on. Trinity Universe takes a different tack on the situation, exploiting, overly serious JRPG conventions for every bit of comedy that can possibly be gleaned from them.

It's rare that I'll actually laugh during a game, but the writing in Trinity Universe was so smart and incisively witty that I found myself rewinding the conversation scenes to get a second (or third) look at certain exchanges. Part of the game's charm is that it has no interest in leaving the fourth wall as anything but a pile of rubble on the floor—while no one ever goes so far as to speak directly to the player, the characters constantly discuss conventions of the genre that they're a part of. Characters are constantly discussing the practicality of their preposterous weapons, debating which ending they should be striving towards, and planning out inevitable sequels and animated television spin-offs.

The wacky, intelligent writing creates such a light, charming tone that it overrode my early concerns about some of the game's presentation issues. While the characters are all beautifully rendered in a semi-animated 2D anime style, there's precious little other art to speak of. All of the game's plot sequences consist of the characters appearing in front of static backdrops, discussing their current situation. At first I worried that I was dealing with another Zoids-style disaster of a developer's ideas far outstripping their means, but the game manages to use even this limitation as a jumping-off point for effective comedy, both in the standard "struggling to describe something impressive just off camera" gags, and in a borderline-brilliant sequence where the characters outline the elaborate multi-part scheme they're going to have to take part in to save the day, only to have the whole thing wrap up in an absurdly quick fashion.

The other element of the game I found pleasantly surprising was the combat—far from the menu-based drudgery I'd been expecting, Trinity Universe's fighting adds enough planning and reflexes to stay engaging without ever getting so complicated that it became daunting.

Characters each have a timer based on the equipment they wear, and each move takes a certain amount of time to complete—seems simple enough, but things get a little more interesting (and complicated) when it's revealed that each character has a set of unique special moves that can be executed by performing the three basic attacks in a certain order. The hook is that any move that starts a special move doesn't cost any time to execute—meaning that the player's goal is to find a pattern that executes the most special moves with the least number of button presses. While this may sound a little confusing, the game does such a good job of gradually introducing each new aspect of the combat engine that it actually encouraged me to really get into the fights and figure out the best possible chains for every situation.

With a wonderful story and fantastic combat going for it, there was bound to be something wrong with Trinity Universe, and there is—sadly, the problem is such a major portion of the gameplay that it's impossible to simply overlook.

Trinity Universe eschews standard RPG world-exploration. It features no world maps or far-off lands to explore. Plot sequences are activated by selecting them from a menu once enough time has passed, and the dungeons in which monsters can be found simply drift in and out of orbit, allowing the player to scour them for ingredients at their leisure. It's those ingredients that lead to the game's problems however: the item-creation mechanic that's central to getting the most out of Trinity Universe.

Item-creation is a big trend in games these days, and the developers of Trinity Universe have wagered a surprisingly large amount of the game's fortunes on the expectation that the player will find no end of fun in tracking down the rare items they'll need to craft better weapons and armour for their characters. Sadly, this was not my experience—I felt as if every bit of complication and difficulty that had been kept out of the combat and charming story had been stuffed into the item-creation, making it needlessly convoluted.

There are more than a hundred possible items to create, and each one requires between three and five different components to craft—with nearly every item requiring at least one unique component whose only purpose for existing is to make that specific item. I'm talking about hundreds and hundreds of different components here, with no reliable way for the player to locate them. There are components that spawn when bosses are killed, components that spawn when bosses are killed in a specific way, components that only spawn during the sequence when dungeons are self-destructing and the player is given just 90 seconds to escape before getting lost in the depths of space. This entire system is so horribly unwieldy that I made it through an entire extensive playthrough of the game without ever managing to craft a single highest-quality piece of equipment, which actually sort of proves my point about the item-creation system as a whole—it's a pointless distraction that serves only to stretch out the running time and suck some of the fun out of an otherwise excellent title.

Even if I ended the game saddled with an avalanche of useless loot culled from the corpses of a thousand dead monsters, I can't say that the misfiring item-creation mechanic soured the entire experience for me. Would I have preferred to play the game without wasting dozens of hours scrolling through lists of items and grinding the same dungeon ten times looking for enough "Ether Blood" to finish building a power-up? Absolutely—but apart from that one frustrating misstep, Trinity Universe is an incredibly fun little JRPG. It's light, accessible, and almost hysterically funny at times. Perhaps the biggest compliment I can give it is that even after finishing this review I'm probably going to go back and take another trip through the game as the other main character. Maybe I'll be just as frustrated with the items this time around, but I have a feeling that the writing will still be good enough that I'll be able to overlook it. Rating: 7.5 out of 10.

Disclosures: This game was obtained via publisher and reviewed on the PS3. Approximately 100 hours of play was devoted to single-player modes (completed 1 time).

Parents: According to the ESRB, this game contains alcohol references, fantasy violence, language, suggestive themes. Parents should have no problem letting their children play this one. The comedy is free of all but the mildest innuendo, and the violence is so utterly cleaned up that monsters disappear in a flash of light when killed. If your children have any fondness at all for anime or JRPGs, this might make an excellent gift for them.

Deaf & Hard of Hearing: You'll be absolutely fine playing the game—the whole thing is is subtitled and there aren't any audio cues to speak of.

It’s really an entertaining game that has sadly been mostly lost to the passage of time. Unless you picked up a copy back in 2010, you probably won’t have much interest playing this amazing title now.

And here I was thinking I could safely ignore this game. Curse you, Danny!