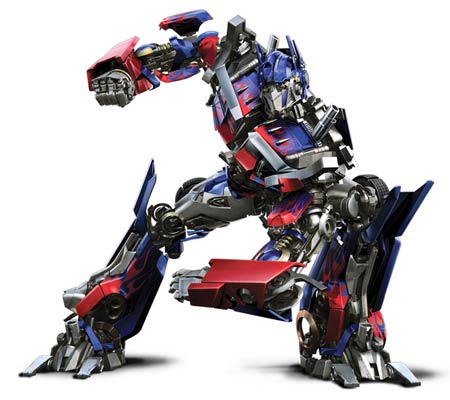 Generic action games don't come with a much higher pedigree than this. The Transformers name promises giant robots hitting one another, and the developer, Traveler's Tales, is responsible for the single greatest licensed game in recent memory, Lego Star Wars. With expectations running that high, there's only one way way to approach the title —try to figure out just what the heck went wrong.

Like most Transformers games before it, Transformers: The Game is a hybrid third-person fighting/driving game. This one follows the plot of the movie, in which elaborately redesigned robots punch each other in hopes of acquiring some sort of magic, shrinking cube. Players are even given the choice of playing as Autobots or Decepticons, the good and evil robots, although their objectives don't actually differ all that much—missions are generally restricted to destroying things or collecting things, or destroying things to collect the other things that fall out of them. It's not exactly the most compelling scenario, but that's not really what people were coming for. Heck, as long as it doesn't feature a robot urinating on John Turturro, I'm happy.

Traditionally, Transformers games have had trouble finding a balance between the driving and shooting portions; the last Transformers game left driving almost completely out of the equation. Transformers: The Game makes the same mistake, but to a lesser extent. I don't know why it doesn't occur to anyone that in a game about cars that transform into robots, gamers might actually want to drive almost as much as they want to fight. The driving controls are adequate, and the cars all look good, there's just nowhere to drive them to. Even the largest level can be driven straight across in less than a few minutes, most far less. With the single exception of the police attention it attracts, there's just no reason to ever do anything but stomp around in robot form. The planes have it even worse—both levels in which the player can control a jet are so small that they can be flown across in flown across in just half a minute. I'm not suggesting that this game should have been some kind of epic Grand Theft Auto: Cybertron, but seeing as the player is controlling cars most of the time, would it have killed the developers to have given them somewhere to drive to? 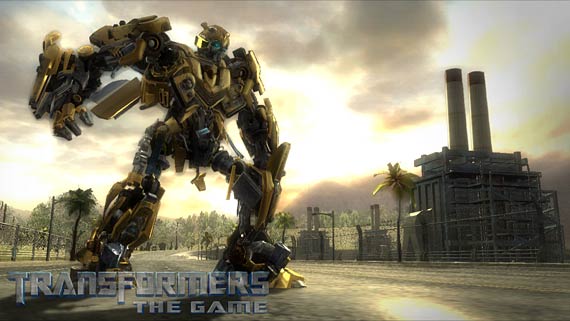 While the levels are almost criminally small, at least there aren't very many of them, so players have that to look forward to, anyway. Actually wait, that's a bad thing, isn't it? Yes, for a full-priced game Transformers is almost criminally short. While there are two full campaigns, each one features only four levels, and just a handful of missions in each. It's easily within reason that someone could finish the entire game within three hours. That's short. That's Bullet Witch short. What's worse, beyond scouring corners of levels to find energon cubes to unlock concept art, there's absolutely nothing to do in the levels once the story missions have been completed. What's even worse is that the game doesn't let the player select which Transformer they'll be using when they replay an earlier level, robbing them of even the smallest amount of sandbox fun that could be gleaned from making Megatron stomp around suburbia kicking over school busses and stepping on police cars.

Which brings me to the combat, which is visually impressive but otherwise critically flawed. It's nice that most of the buildings in the game dramatically explode when punched or shot, but this isn't a game about blowing up buildings, it's a game about blowing up robots, and not a very good one at that. Worried that a game featuring just eight giant robots wouldn't play, the developers leaned on the old crutch of flooding each level with dozens of identical generic robots. So generic, in fact, that other than minor coloring differences, Autobot drones and Decepticon drones are essentially the same robot, looking almost identical and having the exact same special abilities. The idea is that the player won't realize that they're bored if they're constantly deluged with things to punch. It doesn't work as well as the developers had hoped. 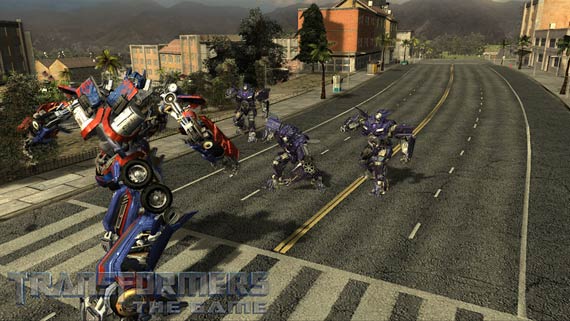 Actually, punching is just about all the player will be doing for the majority of the game. While all robots are equipped with machine guns and missiles, they're only useful in swatting down the helicopters that swarm around at all times like metal mosquitoes. No, the vast majority of enemy robots put up an impenetrable shield whenever they're fired upon. This forces the player to run up and punch an opponent until it dies. This is even more boring than it sounds, as combat is so simplistic that every playable robot has access to just a single three-hit combo, which means the player will spend most of the game jamming on a single button until their enemy explodes. Every now and then an enemy blocks, but then it's a simple matter of picking up something and throwing it at them to stun them briefly before returning to the old three-hit combo. Some may point out that combat in the extremely well-reviewed Lego Star Wars was every bit as repetitive and simplistic, but in that game there were other things to do beside hitting enemies. Not so in the world of Transformers: The Game. All these problems are made all the more infuriating by the fact that, when the computer is controlling the characters, they have access to all sorts of different powers: Bumblebee can throw off Electromagnetic Pulse Bombs, Ironhide can shoot rapid-fire streams of plasma cannonballs, and Megatron has a terrifying spiked mace that he spins around on a chain. Can the player do any of this? No, they're stuck with that same three-hit combo for the entire length of the game.

So Transformers: The Game is just a complete mess, a game that succeeds in almost nothing that it sets out to do. It's not like it's impossible to make a good game about cars that transform into giant robots and punch each other. Traveler's Tales just didn't. Is there an upside to be found anywhere within the disc? Actually, yes. Finding myself a city level, playing as Megatron and fighting a group of Autobot drones, I had occasion to pick one up and hurl him into an apartment building. He crashed into it and debris flew everywhere as the building's facade cracked. Then I decided to finish him off by hurling a bus at his prone form. Sadly, the Autobot moved out of the way just in time, and the bus crashed into the building as well, damaging it until all that was left was a concrete skeleton. I found myself hoping that the building was about to crumble into a pile of rubble, and was oddly disappointed when it didn't. The fact is inescapable, though—giant monsters fighting, wanton destruction—it warmed my heart as I realized that my prediction was coming true, and that with any luck this is the console generation where we're finally going to get a good Rampage game. Rating: 3 out of 10