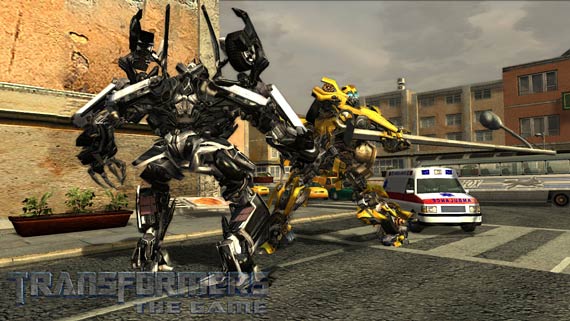 Parents, you can feel pretty safe buying this for children. All of the violence is human on robot or robot on robot, which relegates it to being fictional enough that it probably won't scar or warp them. On the other hand, it's not a very good game, so if you give it to them as any kind of major gift, birthday or Christmas or what-have-you, you'll risk critically disappointing them.

Transformers: The Movie fans can look forward to playing as all their favorite characters, like Megatron, Optimus Prime, and the inexplicably-named Scorponok.

Transformers Fans can rejoice! Unlockables include original playable models for Megatron and Optimus Prime, so once you've already played through the game, you can sample small sections of it again playing as characters that don't confuse and alienate you with their incredibly busy designs.

Deaf and Hard of Hearing gamers should be okay. There aren't any important audio cues, and all important mission details are listed in print on the screen. You will be missing new dialogue from Frank Welker's Megatron though, and for that alone, I feel your pain.