Dual Sympathy, Dark Shadow, Deadly Secret, Dual Strike, Deadly Silence, Double Shot, Dawn of Sorrow. What do all these titles have in common? They're all the result of the unbearably twee habit in the publishing industry of giving Nintendo DS games titles that can be acronymed down to DS. It's sad in the way it draws attention to itself, and the frequency with which it occurs suggests that no one in the industry realizes just how humiliating these titles are. The worst naming offense doesn't involve acrostics, however. No, the proud owner of the most abominable title on the platform is the subject of this review: Touch the Dead. 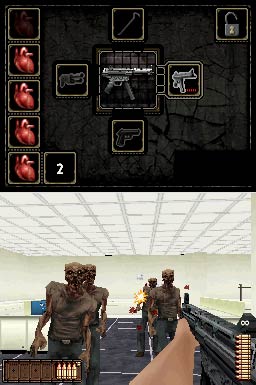 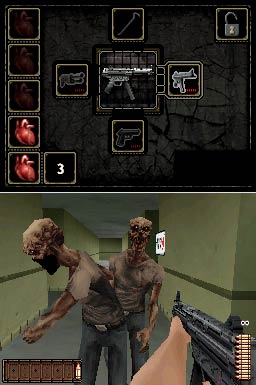 I suppose what makes the situation most puzzling is the inexplicable name change from the original title: "Dead and Furious". While not a stellar title by any means, at least it's an improvement. Strangely, this game makes no effort to hide the name change. As the title screen pops up, a voice intones in the spookiest manner the DS's speakers can muster. The hard difficulty setting is even called furious mode. The only value the new title offers is a literal description of the game's content. Frankly I can't understand why they didn't just go with the title "Touch of the Dead". Like House of the Dead before it, this name would have allowed the game to shamelessly rip off George Romero, traditionally a big hit among fans of the zombie sub-genre.

If it seems odd that I've spent two paragraphs pondering the game's title it's only because there's so little game to discuss here. A first-person rail shooter, the game puts the player in the role of a wrongfully convicted man who wakes one morning to discover that his prison has become overrun by zombies. No explanation for the zombies' presence is ever given, beyond the fact that the prison borders on a medical research facility. There's precious little dialog and no plot to speak of, leaving the game to be judged on a single criteria: does it allow players to touch the dead? The answer is yes. And surprisingly well at that.

Almost all interaction with the game is performed by simply tapping the touchscreen. That interaction is limited to deciding what point on the touchscreen the player would like to shoot. Even when the rare opportunity to choose which path to take arises, all the player is asked to do is shoot an arrow or blow open an electrical panel to override a lock. Controlling the game never becomes more challenging than reloading manually, which involves dragging a clip of fresh ammunition from one end of the screen to the empty clip on the other. It's a little on the awkward side to be sure, but it's supposed to be difficult to reload in the heat of battle, and I found it something of a welcome challenge considering the utter simplicity of the rest of the game. 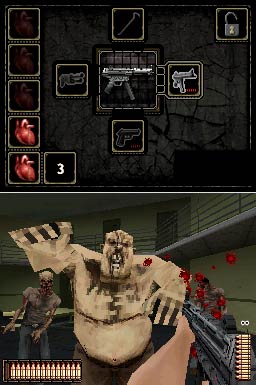 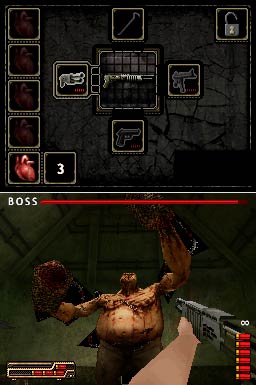 While the controls are simple, the actual game is almost punishingly difficult. Between the epic numbers of zombies swarming the player and surprisingly challenging bosses the game can be incredibly hard at times, a problem that is only compounded by a very poor design choice. The game is broken down into four chapters, each with three levels. While each individual level can be restarted any time, there are no in-level continues. With some levels being upward of 10 minutes long a late level death can present the player with the unpleasant prospect of repeating the exact same level (and I mean exact same—it's a rail shooter, so enemy placement is identical each time) over and over again. Of course these minor problems pale next to the game's biggest flaw: health and extra ammunition are saved at the end of each level, and carried on to the next. This means that if a player has a particularly bad level or even just an off boss fight, they can find themselves without the necessary health or special ammunition to beat one of the later levels. I myself was forced to restart the entire game when I realized that 30 shotgun shells and 10 hearts weren't going to be enough to get me through the third act. Sure, the entire game is only about two and a half hours long, but replaying it should be something I want to do, rather than something I'm forced to do.

It's not that there's nothing to love about Touch the Dead; I can't say I didn't enjoy tapping the screen and watching zombie legs and arms and heads fly off. Heck, it's just nice to see a little gore on the DS for a change. The problem is that the game's misbegotten structure gets in the way of whatever little fun could be gleaned from the simple mindless violence. Rail shooters are thought of as the simplest and most basic type of game, and not without good reason. All the developer needs to do is include an interesting path for the player to walk down and a lot of fun monsters to shoot. It's too bad that by over-complicating everything, Touch the Dead gets this simple formula so very wrong. Rating: 4.5 out of 10

I think the title is just them going for the ironic novelty factor. “Dude, TOUCH THE DEAD, that’s HILARIOUS! I’m buying it!”

It’s not surprising that they would go with a title based on the method of interacting with the game, they’ve already established that naming convention with games like The Typing of the Dead and The Pinball of the Dead. It does still remain a mystery why the full title isn’t “The Touch of the Dead”, but maybe they just wanted it to sound slightly creepy.