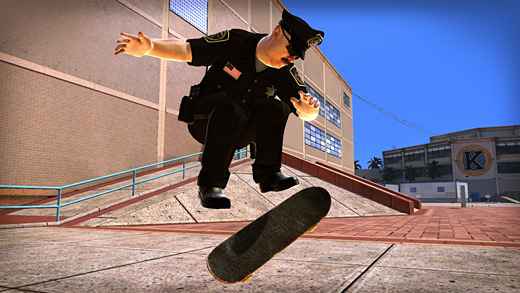 HIGH Winning a four-player game of graffiti by a single "tag."

LOW All these years later, I still suck at the nearly-impossible Downhill Jam.

WTF They didn't just preserve "hobo-bothering" as an objective, they added more of it?!

The PlayStation 1-era generation of polygon-based "3D" games was a strange animal, the particulars of which make it especially ripe for reexamination or remakes.

Earlier, sprite-based games had the virtue of being—by and large—the games that their developers set out to create, with distinctive art styles within their limitations. Polygonal games, on the other hand, were all about compromise.

From the start it was clear that developers had one endpoint in mind: photorealism. Anything less than that was forced on them by the limitations of technology, and these imperfect visuals can make it difficult to go back and enjoy much of that generation nostalgically. While Chrono Trigger will always look like Chrono Trigger, to the eyes of someone who plays most of their games on an Xbox or PS3, Tony Hawk's Pro Skater PS1 looks like a blocky, choppy mess.

In one sense, this makes Tony Hawk's Pro Skater HD the ideal version of the game since it seems to be the game that the developers always intended to make, at least from a visual standpoint. As for how it plays, that's another matter.

Pro Skater HD offers a handful of classic Tony Hawk levels for players to dig into, all updated with modern graphics and the ability to compete against people online in a variety of modes. What it doesn't offer is any kind of a structure or framing device for any of this to take place within.

While the main way of playing is called "Career" mode, there's never any sense of competition or rising status. As the player arrives in a new level, they're given a list of goals to accomplish—attain high scores, find hidden objects, break things—and when a certain minimum of items are checked off, the next map is unlocked, with a list all its own. The only other move the game makes towards depth is a genre-standard leveling-up system, where the player spends points gained by completing objectives to raise their stats, allowing them to jump higher and grind longer without the balance meter becoming too unwieldy. 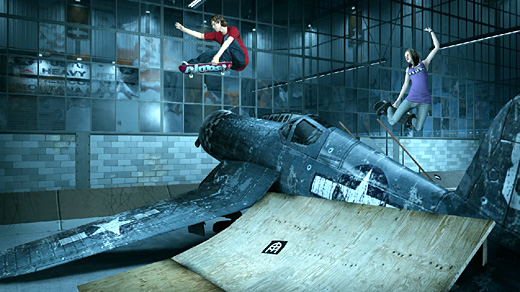 The levels have been updated with a high degree of fidelity to the original titles, which has somewhat of a mixed effect on gameplay. On one level it's entertaining for longtime fans of the series to see the levels realized with a decent—if not mindblowing—level of detail, but problems arise because the geography of the levels hasn't been upgraded along with the textures.

Half of the game's levels were designed before the "manual" (a way to keep a combo going when no grindable surfaces are available) was added to the franchise, and as a result, they tend to be cluttered and claustrophobic, never giving players room to work out their own "line" and develop a personalized way to approach the challenges. Every level asks the player to put together an impressive high score to move forward, and while that's possible to do on the Pro Skater 1 levels, the levels drawn from the second game are far more accessible and fun. Speaking of accessibility, it's one of the game's major problem areas, which is flat-out baffling to me.

Considering that it's a remake of the earliest games in the series and that it's only available as a comparatively inexpensive download, Pro Skater HD seems like it would be a great way of attracting new players to the genre. However, this doesn't seem to have ever occurred to the developers—the game just starts with no preamble, never properly explaining what it is or how to perform even the most basic tricks.

Yes, there's a "how to play" section in the pause menu, but there are few more frustrating experiences when first learning a game than stopping the action and flipping through six pages of manual to find out which button does what. It's as if the developers started the project assuming that their customers would only be longtime fans buying it nostalgically. The one sop made to the newcomer is a super-helpful map screen which lays out not only where all the level's secret items are located, but also provides a convenient list of all the gaps and jumps that offer special point bonuses when completed. 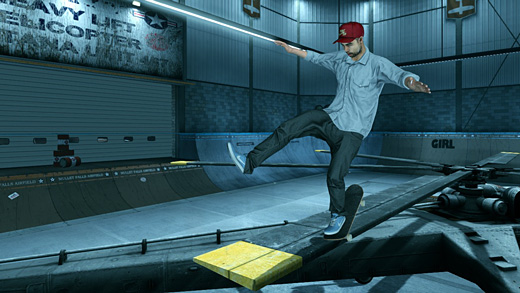 Pro Skater HD's bright spot comes in the multiplayer modes, where many of the flaws can be overlooked simply by virtue of the fact that all of the players are operating under the same handicaps.

While all of the multi modes boil down to who can score the highest trick totals, each one has enough of a twist on the formula that they feel like unique experiences. Straight competition and the famous big head mode are fine, but my personal favorite is "graffiti," which adds a degree of strategy by grading players based on who performed highest-scoring trick on each individual piece of the level's geography.

Players can "steal" points from each other by besting their scores on ramps and rails, so an incentive is created for players to avoid going for easy points on standard lines, and instead  focus on tricking hard-to-reach areas as a way of guarding their scores. Whichever mode players select, just having four skaters gleaming their way through levels at the same time is a thrill, especially for old fans of the series who remember these classic levels as solitary challenges.

Nostalgia is certainly a powerful motivator in the video game world, and Pro Skater HD is undoubtedly effective at recalling the feeling of playing the originals with a bulky Dreamcast controller—although a decent amount of the credit for that probably goes to the soundtrack, which features many of the original songs, along with a selection of new tracks. Beyond the value of remembrance, though, Pro Skater HD simply doesn't have a lot to offer.

With just seven levels—three of which have serious problems working with the current control scheme—it's not like the game has a wealth of content, and its hostility to new players prevents me from recommending it to any but the hardcore. Were it not for the easy-to-play and chaotically enjoyable multiplayer mode, I'd consider the game a complete wash. As it is, Tony Hawk's Pro Skater HD is a deliberately niche title, which is too bad, since the original was good enough to get me hooked on the genre over a decade ago, and I'd imagine that with a few tweaks, this update could have done the same for a whole new generation of players. Rating: 6.5 out of 10.

Parents: According to the ESRB, this game contains blood, comic mischief, mild language. While the game doesn't have any strong objectionable content, you'll still want to be careful in letting your children near it. The ESRB focuses on a few salaciously-named moves and areas, as well as the blood spatters that appear after a nasty bail, but they'd completely missed just how imitable the actions displayed in the game are. Skateboarding is still an extremely popular activity, and the kinds of activities performed by the in-game characters—while fantastical—aren't so out of the realm of possibility that they couldn't influence behaviour. Add to that the fact that the game's avatars are depicted as skating without safety equipment, and you have a possible source of concern. If your children want the game because they're into skating in real life, it's probably worth a conversation.

Deaf & Hard of Hearing: You're going to have almost no trouble with this title. The core gameplay is entirely lacking in an audio component—the only thing you'll be missing out on are a few cues that let you know that a secret has either been unlocked, or is now available. Nothing key to the gameplay, but you will be missing content that you'll have to go to the internet to discover how to unlock.