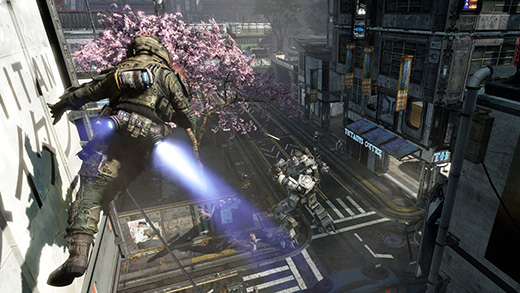 HIGH Tearing a pilot out of his mech and tossing him into the distance.

LOW Dying again because burn cards' effects are not well-described in advance.

It's satisfying to watch giant robots pummel one another. So satisfying, in fact, that I'm eternally surprised by the North American media's collective shrug at the entire concept. Perhaps they're reflecting a public who cares little for images of battle when they involve hundreds of tons of anthromorphic steel, and if that's the case, I can only hope Titanfall

's obvious virtues will allow it to win enough fans that attitudes begin turning in a distinctly pro-mech direction. If there's one clear feeling that Titanfall creates in those who enjoy its well-balanced gameplay and impressive art design, it's an overpowering puzzlement that it took so long for this game to come into being.

As I outlined in last month's preview, Titanfall is set among the stars, where a cruel mining corporation is crushing the common people under its thumb, forcing them to retaliate with the only weapon in their arsenal: giant robots with assault rifles.

This is the setting for what's primarily a multiplayer deathmatch concern, where people battle each other in over a dozen maps and five different gametypes. There's also a 'story' mode that's a disappointment, only lasting long enough to make the point that the game's setting could easily support (and probably should have offered) a full story mode. Players know that something interesting is happening, but they're too busy fighting to see any of it. Worse, a second trip through the story mode as the game's villians is pitched as a chance to see 'the other side of the story,' but all I learned is that the evil mining corporation employs mercenaries who enjoy killing civilians. Not exactly shocking new ground being broken there.

Titanfall offers players an impressive amount of customization options, giving them a choice of weapons, mods, active and passive perks. There aren't any classes limiting players, allowing them to tweak the way their soldier plays to minute degrees, and then save them to a series of slots, which allows for easy switching depending on which map comes up. Big open areas? Take a fast preset character. Warrens of wrecked buildings? This time play as the guy who can use sonar pings to see through walls. Titans are similarly customizable, with a number of different weapons, unlocking as the player gradually levels up.

The leveling system is another one of the game's assets. Rather than simply tracking number of kills, headshots, and assists and assigning an experience point number to them, Titanfall is packed to the brim with mini-challenges designed to provide concrete rewards for almost any action the player can think of. From killing people with a certain weapon to the number of times they've ejected from a mech gone critical, Titanfall encourages players to relax and constantly experiment—safe in the knowledge that even if they're terrible at sniping people, there's still bonus experience for using a scoped rifle for half an hour.

As an added bonus, each challenge is rewarded with a 'burn card'—a single-use item that players can employ for an advantage lasting the length of one life. This can get frustrating at times, since an unprepared player trying out a new card can find themselves quickly gunned down. Luckily it's never too hard to restock the 'deck' with new cards, and once players have familiarized themselves with the ins and outs of the perks, they'll discover another way to decide their own playstyle.

Moving away from the technical side of things, it's difficult to overstate just how well-thought-out and coherent Titanfall's art design is. From map to map, whether battling in the bowels of an abandoned starship or dodging giant flying dinosaurs in an alien desert, there's a continuity to the architecture. No matter how worn down and crumbling some of it may be, it's clear that every level in the game is set within the same believable world. Quite an achievement for a game set in the distant future.

On the other hand, for a game that makes the experience of climbing into a giant robot and stomping around so wonderfully tactile, it's a major problem that the Titans can't affect the environment in any meaningful way. While there are obvious game-balancing reasons for this limitation, it still feels unnatural to watch rocket after rocket slamming into a concrete wall and leaving no more than a few pockmarks behind. So much of the game's appeal is based on the rush of power gained by sliding into a mechs, so it can't help but feel like that power is being undercut when a flimsy steel catwalk withstands more punishment than a dedicated war machine. When every other part of the game feels so right, it's too bad that the developers couldn't find a way to keep this from feeling so wrong.

With its compelling setting, tight controls, and constant feeling of accomplishment, Titanfall

may be the best pick-up-and-play FPS I've ever encountered. And as I watch giant robots stomping around a lagoon, blasting away at the human gnats that pepper its armor with missiles, it really doesn't seem possible that Titanfall took this long to become a reality. Hopefully the North American media will catch on, and there will be more of this. Soon. Rating: 9 out of 10


Disclosures: This game was obtained via publisher and reviewed on the Xbox One. Approximately 20 hours of play were devoted to multiplayer modes.