Titanfall's first expansion pack has arrived, offering three new maps on which robots can punch humans into chunky red jelly. Actually, that's a bit of an exaggeration, as two of the three maps have something of a design flaw, in that they're so cramped that it's nearly impossible to effectively operate a titan within them. The third map, while certainly titan-friendly, is uninspired and feels like a rehash of other maps from the main game.

Runoff, the uninspired map, drops combatants inside a water reclamation facility full of concrete walls, catwalks and imposing steel structures. While I've been impressed by the utilitarian/industrial aesthetic of the game's level design in the past, this map doesn't use that design to tell any kind of a story. It doesn't have the rusted-out feel of an abandoned facility like Rise, nor the busy, active appearance of Overlook or Demeter. The only interesting design element here is the three distinct vertical planes that combat takes place across. There's a water sluice below, the main floor above it, and a series of paths and catwalks over that. Nothing really special, but at least the ease of vertical movement opportunities ensure that Pilots and titans are evenly matched on this map. 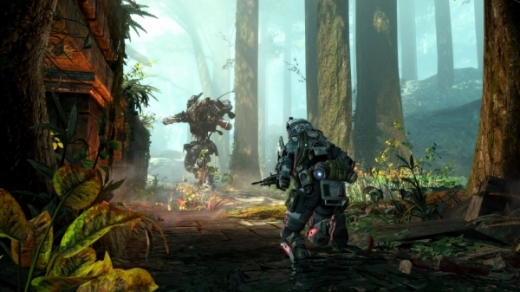 The same can't be said for Swampland, which is everything Runoff isn't. Set on a distant alien world, Swampland's combat centers around an outpost plopped down next to a set of ancient ruins. Players can dodge in and out of crumbling stone structures, duck behind huge trees, and weave their way through a comparatively modern facility. Like all the best Titanfall maps, Swampland gives players a window into the world of the game while raising interesting questions – who built these structures, and what do humans hope to gain by studying them? The only problem with this map is how unfriendly it is to Titans. With a distinct lack of open sightlines and clear paths it's a hassle to move Titans anywhere, and the huge amount of cover gives Pilots a huge advantage over their giant foes. 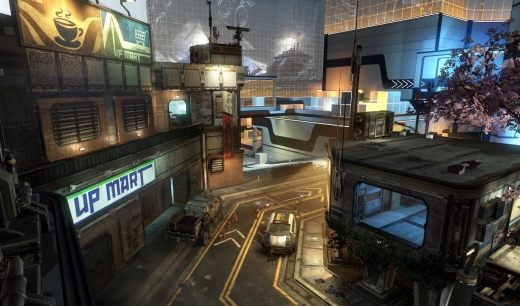 This problem is only compounded in the third map, War Games, which is both the most conceptually interesting of the three, and the most profoundly unfriendly to actually playing as a Titan. Set inside of a virtual training program, War Games  is a 50/50 split between a gorgeously-rendered slum and a completely clean artificial construct, made up of glowing, ultra-clean walls. The map is a wonder to behold, with two different aesthetics bleeding into one another at rough angles, as if players are running through an unfinished prototype of a map, moving from finished product to placeholder in the space of a single wallrun. It's just too bad that the developers didn't tag this map as 'Pilot-only', since that's clearly what they were designing it for. Frankly, the map is so cluttered that there's just no room for Titans in it. In a few of the matches I played on War Games I found myself and other forgetting to call in our Titan drops since there didn't seem to be any reason to bother. Not exactly a great selling point.

The Titanfall Expedition Map Pack doesn't make a good argument for its ten dollar price tag. If anything, it provides an important object lesson in how difficult it is to make a good Titanfall map, and what an amazing job the developers did with the main game. It must be an immense challenge to balance an area so it works equally well as a parkour obstacle course for pilots and a huge open battlefield for Titans. With one map that does the job but feels uninspired and two that are beautiful, interesting, and woefully lopsided, the Expedition Map Pack proves that even the creators of Titanfall sometimes struggle with making their own systems work.