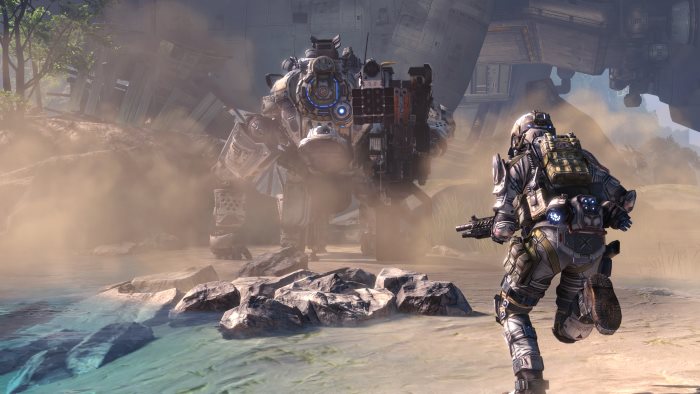 (Disclaimer: I generally do not play online shooters, so if a feature I'm impressed with is actually a genre standard that I'm merely unaware of, please consider it wide-eyed naivete rather than shameful ignorance.)

My first and only experience with multiplayer-only online shooters was a few years back when I reviewed Battlefield 2142, a game that features the exact same premise and publisher as Titanfall. Judging it against its most similar competition, Titanfall is a far better game than B:2142, but leaving it there would be to damn the game with faint praise. From my first moments with the game, learning how to play in a series of incredibly helpful tutorial levels, to the point, some eight hours later, when I felt I'd experienced enough of the beta's two maps and three game modes to be to write this preview, I found the the gameplay to be tuned to the point it felt like second nature, the art design fantastic, and the overall experience delightful. Assuming 'delightful' is a word that can be used to describe a game in which a robot can thrust its fist into the chest of its foe, grab the human pilot within, and then throw its victim against a wall so that they're reduced to a cloud of viscera.

Set at some point of the future (the beta is largely context-free) Titanfall posits a world where differences between megacorporations and rebellious militias are settled primarily by twenty-foot robots carrying gigantic assault rifles. While I wasn't given any details about the game's setting, the design aesthetic viewed in the two levels did an incredible job of creating a palpable sense of location. One map was a warren of office buildings and warehouses by the docks, the other a small facility set at the edge of a cliff. The common factor tying these two areas is the striking architecture. Every building is cement, using an architectural style best described as 'utilitarian bunker'. Apparently Titanfall's world is built from poured concrete – which sends a impression to the player that this whole planet's facilities were built in a hurry, and and maybe not all that well. The state of one of those buildings – crumbling from an impact sometime before the game began – creates the impression that this whole world is ready to fall apart, whether or not giant robots are stomping all over it. 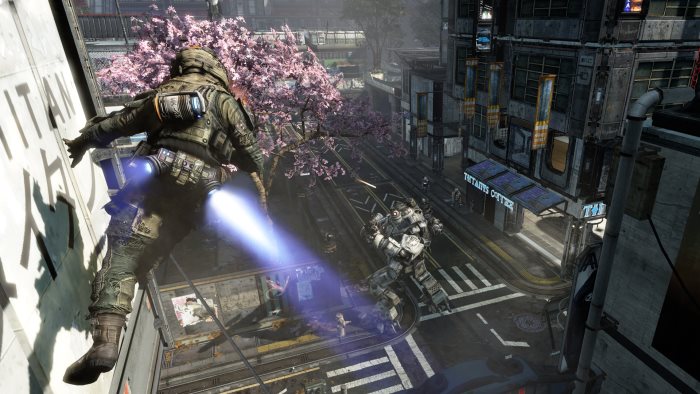 On the subject of robots, while the game's suits of power armour are fantastic to behold, Titanfall's major accomplishment is that having tons of steel loping around an arena otherwise populated by fragile meatbags in no way unbalances the fight. Striding around in a Titan provides an obvious advantage – giant weapons aside, opponents can literally be stepped on – but they're still just machines made out of armour and electronics, and every player gets a rocket launcher as part of their default loadout.

Armed with a jump-pack, cloaking shield, and the ability to climb atop Titans and shred their precious machinery, playing as a Pilot outside of my mech never felt like a disadvantage. This is because the developers have done such a stellar job of making movement feel effortless and empowering. Not only can pilots duck and sprint, their jump packs allow them to wall-run and double jump, moves that can be chained together in order to scale any obstacle in short order. In Titanfall there's no hunting for staircases or ladders. Want a better view of the battlefield from the top of that building? Just go.

The three modes available for play were fairly run-of-the-mill, a team deathmatch where everyone starts on foot, with the option of hanging out and waiting a couple of minutes for their mech to drop, or they can always shorten the queue by killing some of the opposition. The second mode is the same thing, but instead of reaching a certain kill score, the teams are each trying to hold control points for a set length of time. Pretty standard stuff. The biggest departure is the Titan-on-Titan combat of the third mode, where the game opens with all players already wearing their power armour – the objective? Kill all of the other team's mechs, none of which are replaced when destroyed. Played in a series of quick matches, this mode was the most unique and engaging, especially because after a player's Titan is destroyed, they can keep helping the fight on foot, although a second death will take them out of the fight until the start of the next round. 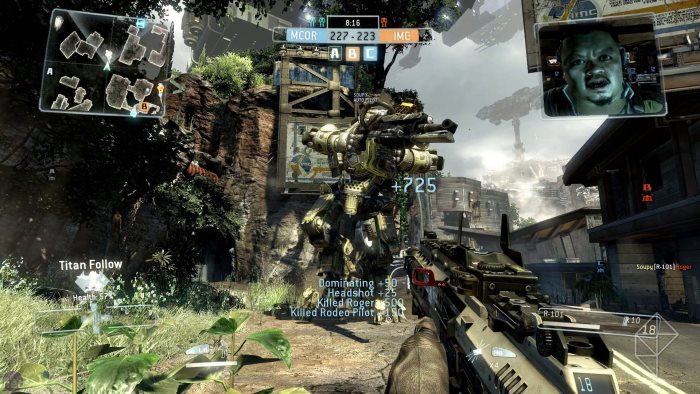 In a game with a large number of truly stellar features, the amazing way it shifts from a fast-moving military FPS to a mech game cannot be oversold. Each deathmatch I found myself eagerly anticipating the moment my Titan would unlock so that I could watch it plummet from the heavens and welcome me aboard. There was a moment of jarring vertigo the first few times I climbed into a Titan – jumping into vehicles in games tends to either switch things to 3rd-person or bring up a completely new set of controls and HUD, but here the transition here is seamless. One second I'm on the ground, blasting away with a shotgun, the next my POV is fifteen feet in the air and I'm rapid-firing an anti-tank rifle.

There are plenty of other things worth complimenting in Titanfall – the way the presence of NPC soldiers on each side gives every match an epic feeling, the burn cards that provide a key perk for the length of one life, the way that at the end of a match the losing team members have a chance to escape on a hovership – which can be shot down if the winning team has enough Titans kicking around. The biggest compliment I can give it, though, is that I'm actually looking forward to playing more of it. Once I'd finished reviewing Battlefield 2142 I never booted the game up again. As I finished playing the Titanfall beta I found myself seriously wondering whether the levels and unlocks I'd earned would transfer over to the main game. And then I realized that I wouldn't mind playing through the first ten levels worth of content again. An experience I never imagined I'd have with an online-only FPS.