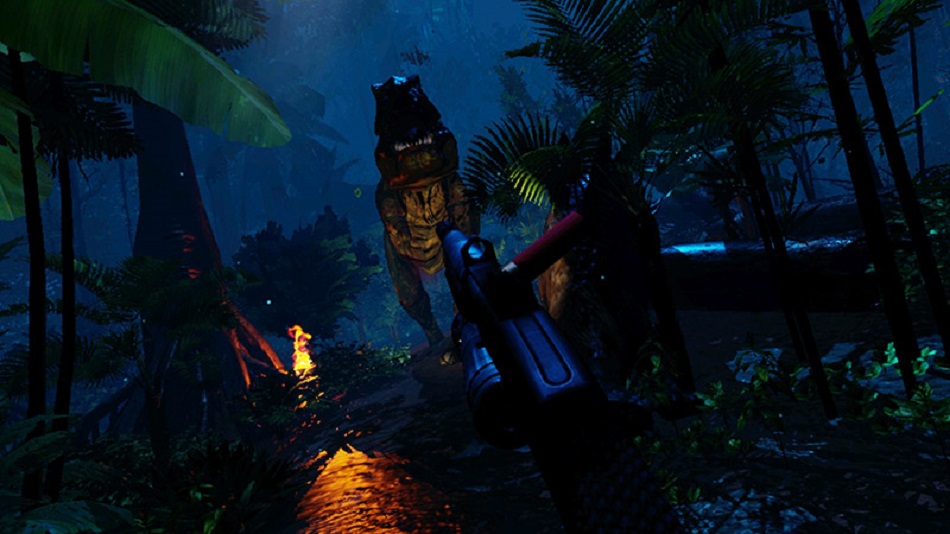 WTF Headshots make a cash register sound play… but the game does not have an economy.

I’d like to imagine Time Carnage‘s developers getting into an argument as they set out to make a VR wave shooter.

In my mind, I can see different factions each bringing a host of arguments to the table about what sort of enemies the player should be battling. Working under the common wisdom that wave shooters have to be about battling zombies, dinosaurs, or robots, each faction would then make a passionate case for their preferred baddie. As the fight became heated, tempers rising, perhaps, to the point where furniture was being thrown, I suppose that one wise team member might have offered a compromise — what if players battled zombies, dinosaurs and robots?

…And thus, Time Carnage was born. In my head, anyway.

Time Carnage‘s threadbare plot takes players on journey to the past and future in a shielded time bubble from which they can blast away at hordes of whatever beasts they find. First they’ll head to the near future, where chemical and biological weapons have spawned hordes of zombie mutants. Then it’s on to the distant past, where dinosaurs are out for blood. Finally, they’ll head to a distant robot-packed future where they’ll fight for the survival of humanity against deadly AI. There’s also a final level whose contents I won’t mention, because it was a pleasant reward after beating the three main areas.

Gameplay is incredibly smooth, even by wave shooter standards. The player stands on a slightly elevated platform with four glowing pedestals in front of them. Guns float on the pedestals, ready to be acquired either by reaching out and picking them up, or by aiming a hand in their direction and pressing a button. Reloading is handled by tapping the same button to return the gun to its pedestal, where it will automatically refill. This four-gun concept is a great idea, allowing the player to spew out a wall of lead with both hands, firing with one set of guns while the other reloads. Time Carnage wants players to be firing wildly in all directions at all times, and both levels and foes are designed to accommodate that. 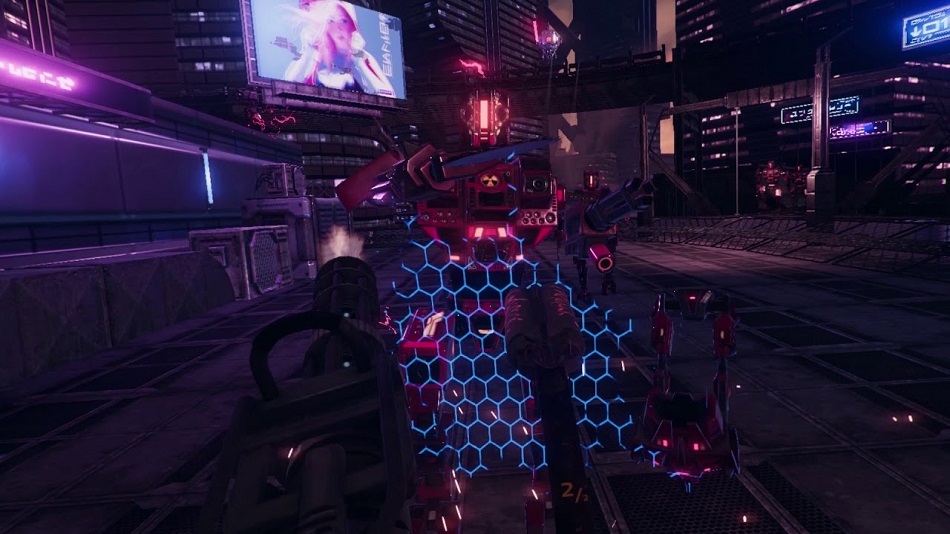 Each one of the time zones has four different maps, in which the player has to fight off 10 waves of enemies. The maps are constructed to provide between three and five clear avenues of approach for enemies, asking the player to cover the entire 180-degree field of fire in front of them. There’s a decent amount of variety in the enemies — they vary wildly in height, speed, amount of hit points, and there are even flying foes that fire slow-moving projectiles that can be shot out of the air. While there are no real standouts here from a design perspective, all of the monsters are capably-built, and sufficiently threatening when they get up close and personal.

Time Carnage does an exceptionally good job with peripheral bells and whistles. The time platform itself is a great location, and the time-bubble is one of the better examples of the effect I’ve seen. Little details stand out, such as the way the player’s fingertips glow when they’re pointing at a weapon so they can tell even out of the corner of their eye that they’re ready to re-arm. Every part of the game has been carefully thought out to give the best wave shooter experience possible.

Well, almost every part. I came across two minor roadblocks to fully enjoying my time. This first is a simple graphical issue – when enemies get close enough to strike the player’s energy shield, it makes a bright electric honeycomb effect. It’s a good visual cue that an attack is happening and serves to draw the player’s eye to an emergency situation. The problem is that it also completely obscures small enemies, like the zombie dogs that populate the first area. As a result, players will know that they’re being hit by something, but they won’t be able to see it. They’ll have no choice but to fire wildly, wasting ammo as they’re struck additional times.

The second problem is one of pacing. There simply aren’t enough enemy types in each zone to justify ten waves of combat on each map. Especially since the early waves, which often feature just a handful of enemies, are almost pathetically easy to beat. On almost every map I found my interest flagging in the last couple of waves. A smaller number of more intense waves would have worked better. It’s not like it would have made the game feel short on content, either — in addition to the campaign, there’s a wide array of challenge modes that force the player to battle enemies with strange restrictions, as well as an arcade mode to test their skills on different difficulty levels with a variety of perks.

While Time Carnage has little in the way of innovation or originality, it nails the fundamentals so well that it’s a pleasure to jump in. There are plenty of other games that let players grab a couple of guns and blast away at zombies, robots, and dinosaurs, but the ones that manage all three and do it in this kind of style are few and far between. Rating: 6.5 out of 10

Disclosures: This game is developed and published by Wales Interactive. It is currently available on PC VR platforms and PSVR. This copy of the game was obtained via publisher and reviewed on the Vive. Approximately 10 hours of play were devoted to the single-player mode, and the game was completed. There are no multiplayer modes.

Parents: According to the ESRB, this game is rated T and contains Violence and Blood. It’s a game solely about shooting zombies, dinosaurs, and robots. The blood isn’t excessive, but it’s certainly there.

Deaf & Hard of Hearing Gamers: The only major audio cue is a noise that plays when guns are finished reloading. You can also look at their ammo counters on the pedestals, so it won’t be too inconvenient, though.

Remappable Controls: No, this game’s controls are not remappable. It is played with two Vive controllers.