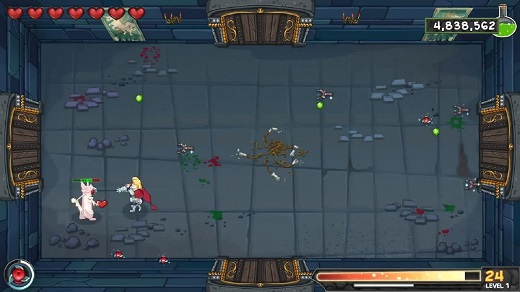 HIGH Getting to level 10 and doing 30K damage per hit.

LOW Getting killed by a boss because I hadn't grinded up enough levels.

WTF Wait, the Unicorn is doing what with its horn?

The Weaponographist is an intriguing entry into the roguelike/arena combat genre that Binding of Isaac popularized. It tells the story of a vain hero who, upon refusing to help a town plagued by demons, finds himself pressed into service by a curse. In order to save the town he'll have to brave five levels of a dungeon, slaughtering demons until every boss is defeated and the curse can be lifted.

The curse in question forms the backbone of the game's two key mechanics. First, every weapon the hero holds crumbles to dust after just a few swings, so he constantly has to kill foes in order to find new ones. Second, his experience points are constantly being drained, so unless he can keep a combo meter going, all of his power quickly dissipates.

Combo management is a fairly common mechanic in games these days, but these elements work together to encourage a frenetic playstyle, keeping players rushing from one foe to the next, quickly slicing to keep from zeroing out. The Weaponographist's way of making combos absolutely vital to success provides a fresh spin on its content.

There's more to The Weaponographist than the combos though. But first, let me back up a bit.

In my view, there are two major types of roguelike games—ones where the player starts out as a blank slate and can theoretically roll credits on the first attempt, and those in which the player is expected to die over and over again to level up until they're ready to make it to the end. The Weaponographist belongs to this second school of design, to an egregious degree.

In my view, it would be completely acceptable to expect players to level up basic perks like the combo meter or their health bar. What feels designed to pad out the game's running time is that each of the game's 20-plus weapons and spells have to be individually leveled up to the point that they're useful beyond the first two or three screens of each level.

No matter how good a player is at slaying foes, if they haven't powered up the weapons' base stats, there will come a point when the enemies' exponentially increasing health will outstrip the player's ability to damage them. This traps the player in a cycle of grinding for currency until they can afford to make it to the boss, and then starting over again on the next level because each has its own unique weapons.

Let me be clear: every one of the game's weapons need to be powered up in the same manner. The player isn't given the option of simply focusing on one or two favorite tools and leaning on them through the game. With each weapon crumbling after just a few uses, there's no way to prevent being stuck with super-tough enemies while wielding weapons that do almost no damage. This is manipulative and forced grinding at its worst, and I found my enjoyment of the game waning the longer it went on.

The Weaponographist also makes some strange mistakes in basic combat design, perhaps because the devs were so focused on including so many weapons that they couldn't be bothered to playtest all of them. This oversight is especially notable when dealing with ranged weapons.

Specifically, many of the enemy sprites are taller than they are wide, so while shooting them from the side is easy enough, it becomes almost impossible to hit them from above or below. Other enemies are so short that if they walk along the bottom of the screen, it becomes physically impossible to strike them with a ranged weapon.

There are some area-effect weapons in the game, but they're largely useless since there are only ever three foes onscreen at any given time, making it improbable to strike more than one with a blast. There are also trap-based weapons meant to do area damage, but these are a bust since only one foe will pursue the hero—the movement patterns of the other foes are so hard to predict that trying to get them to wander into a pool of holy water is a pointless ordeal.

The concepts behind the The Weaponographist are interesting ones, and they incentivize combo-hunting better than most titles I've seen in a while. It's just too bad that the developers weren't able to get a better handle on character progression and combat design. With a lot of tweaking, this could have been a bite-sized little gem. As it stands? The Weaponographist is a drawn-out mess. Rating: 4.5 out of 10


Disclosures: This game was obtained via publisher and reviewed on the PC. Approximately 5 hours of play was devoted to single-player modes (completed 1 time) and there are no multiplayer modes.

Parents: This games was not rated by the ESRB, but it contains blood, violence. Despite the gore on display, this one is actually pretty safe for teens if they're interested in the genre. Yes, every enemy explodes into a cloud of blood or has their head fall off when killed, but it's all extremely cartoonish, and no more traumatizing than Daffy Duck getting his bill rearranged.

Deaf & Hard of Hearing: You will have no problems at all with this game. There's almost no story—but it's all subtitled. No audio cues whatsoever will interfere with your enjoyment of the game.