, now I’d like to cover the first moment that really made me question my initial assumption that I was playing a brilliant subversion of video game tropes—the last moment during which I doubted Deadly Premonition‘s intentions (if not its execution—there would be plenty of doubt left to come on that front).

Arriving at the police station, York finds himself embroiled in a cliche, although one with a twist, letting us know that even here, in one of the most traditional contrived video game-y situations, things aren’t exactly the way one would expect:

Fetch-quests tend not to be assigned by incredibly swishy gay stereotypes.

So I poked around the office, looking for the keys to the filing cabinet, hoping to get the story moving. They weren’t hard to find at all: 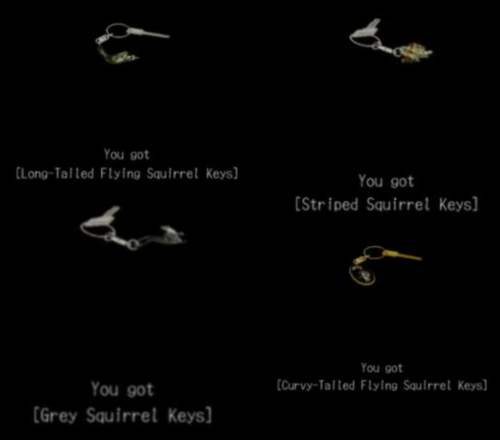 But when I returned to Thomas, he revealed that they weren’t the right kind of keys after all—it seems that all of the station’s keychains have little metal squirrels on them, and only an expert is capable of telling them apart. So back into the station I went, searching out more and more keychains, each time bringing them back to Thomas and being told that I’d made a mistake, and once again selected a slightly wrong kind of squirrel.

Halfway through the forty minutes I spent wandering around the police station I nearly quit the game—the whole puzzle seemed so idiotic that I couldn’t believe it had been included. “Another set of keys?” I thought to myself, “They must be joking!”

And, of course, they were. The entire sequence is a joke being played both on the player, and on most other “survival horror” titles. While not a time-sink joke on the level of “Desert Bus”, the game is purposefully wasting the player’s time to make a point about just how much time is wasted by ridiculous fetch-quest puzzles in other games. It’s not an accident that this puzzle features a series of themed keys that have to be located: it’s the developers taking a shot directly at the Resident Evil series.

How can I be sure that this is meant as an attack, rather than a legitimate (and failed) attempt at creating a “puzzle”? Because this isn’t the only time it happens.

Before I move on to that, for the curious reading this, I’ve compiled all of Thomas’ squirrel responses into one video:

(Note: I don’t expect anyone to watch all of those in a row. You’d have to be crazy.)

With the file located, the police have a meeting to go over the known facts of the case, which gives us a chance to get to know the victim a little better, before heading to the hospital to watch her be cut up by a doctor.

When the team arrives at the hospital, they’re greeted by the most meta fourth-wall-breaking sequence in the entire game, a conversation that seems meaningful, but then never really goes anywhere, and just remains, in the end, one of a dozen strange things about the game that will never really be explained.

No, you didn’t hear that wrong—Fiona is reading a book about the plot of the game. A book whose title is likely an oblique reference to the mystery that York is trying to solve, although theorizing any further about that would get extremely deep into spoiler territory. More importantly, though, there’s another puzzle to be solved immediately:

Overlook for a moment the fact that the hospital seems to be using old Apple computers, and that Ushah’s name seems to be a tragic misspelling of either “Usher” or “Isiah”, and consider the puzzle. Reminiscent of anything?

Make the “clue” a little more obtuse and the puzzle less mind-numbingly easy, and you’d have something from a Silent Hill game—between this and the parody Resident Evil puzzle with the keys, it becomes clear that the developers are offering their game itself as an act of criticism. They’re showing up other popular Survival Horror franchises by presenting their tropes and cliches in an absurd light, then abandoning them (almost) entirely for the rest of the game.

It’s a bold thing of Deadly Premonition to do, and one of my biggest disappointments about the game is that it doesn’t go all the way with this design revolution and cast off generic repetitive combat as well. Of course, that’s a conversation for another article. Specifically Part 11.

Until then, I’ll leave you with a video of the autopsy scene, because even though it’s a full ten minutes long, the whole thing is both a great example of how a completely traditional and cliched sequence (going over the victim’s wounds and profiling based on them) can be enlivened and elevated by featuring a dynamic and singularly interesting character at the center of it.

Also, just a quick reminder—Christmas is just around the corner, and Deadly Premonition makes one heck of a gift: It’s less than 20 dollars

, and everyone who likes wonderful things (and owns an Xbox 360) will be pleased to receive a copy.

Next time: The Benefits of Virtual Carpooling! (Deadly Premonition is the Game of the Year, Part 10)

York’s dismissal of the novel’s plot is quite amusing, as it refers to a fictional world within what the player knows is a fictional world. The developers were really having fun here. The hospital was where the game confirmed to me that the game was a grand, knowing joke, rather than a so-bad-it’s-good game as some reviewers thought. There were already hints of that when York joined Emily and George on the bridge at the start of the game, the other characters looking at each other with ‘Who IS this guy?’ expressions. But the scene in Ushah’s office where York… Read more »