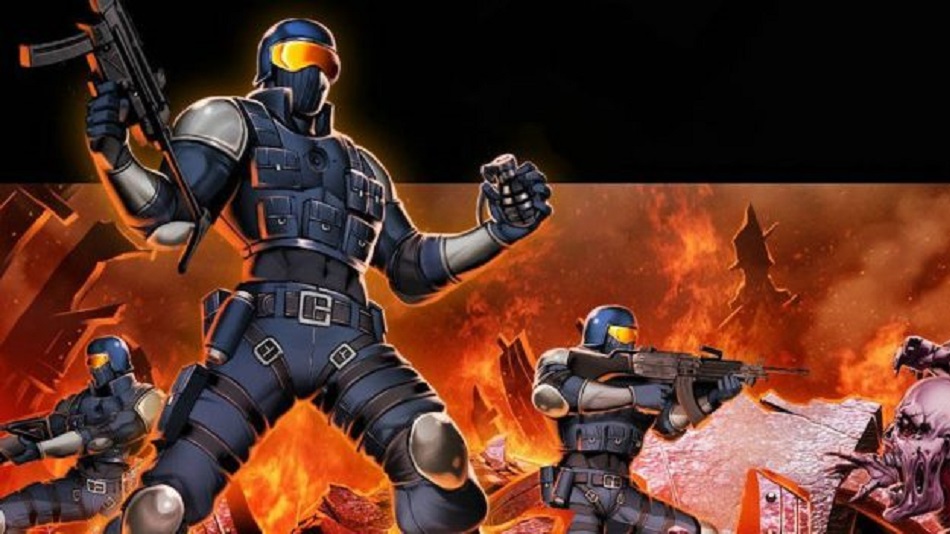 LOW Seriously, how is the shotgun this well-hidden?

WTF Hey, why can’t we get Aliens Infestation on Steam?

It’s not really a ‘demaster’. There was never a current-gen Mummy game to be stripped down into a 16-bit format, as Devolver Digital has so effectively done with the Serious Sam franchise. No, despite the title, this is something older and far more interesting.

The Mummy Demastered harkens back to the SNES and Genesis days, when a publisher – often Acclaim – would obtain the license to a film and then farm it out to a dev who would attempt to plug the movie’s plot into an existing videogame genre without being overly concerned about how closely it hewed to the source material. While this approach rarely led to anything but serviceable games (and a lot of terrible ones) we occasionally got a true classic, such as Alien 3 for the Genesis. I bring this particular title up because it’s extremely relevant to this review — that game was one of the inspirations for Aliens: Infestation, which is, in turn, the inspiration for Demastered.

The Mummy is a Metroidvania title in which the player controls agents from Prodigium, an agency responsible for keeping monster activity to a minimum. When an ancient evil escapes her Iraqi prison and attacks London, it’s up to these gun-toting specialists to explore a warren of tunnels underneath the city, blasting away at the hordes of monsters she’s brought along for the ride.

The game is almost shockingly faithful to the formula of the genre. Players start with a hundred hit points and an SMG with unlimited ammo. They have to explore mostly subterranean levels, seek out storage rooms holding equipment from previous agents, and eventually unlock the tools necessary to open up new areas where they’ll find whole new sets of monsters and bosses to deal with. As they grind their way up through the supernatural food chain, they’ll eventually face off with the Mummy herself. 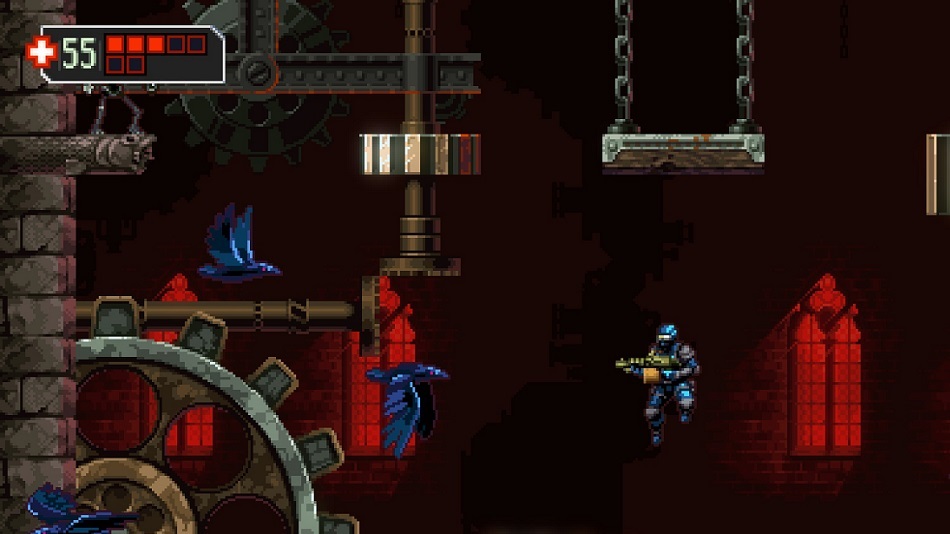 This is a perfect example of ’90s style pixel-art done extremely right. All of the creatures are lushly detailed, and drawn in bright colors to ensure that they’re distinct from the intricate backgrounds. Enemies range from tiny hopping spiders to screen-height boss monsters, and there are more than enough types to ensure that a constant flow of new threats appear for the entire length of the campaign.

Prodigium has also arranged for a huge arsenal to be left scattered around the area. Assault rifles, rocket launchers, a lock-on plasma beam – there’s a gun for every situation, and enemies are good about dropping ammo when killed. Once I’d picked up enough ammo pouch upgrades, I was able to stop using my default rifle entirely. It shows the the developers put quite a bit of thought into weapon balance and enemy drop rates.

The one drawback is that players can only hold two weapons at a time, and certain weapons are only useful in such rare situations that it doesn’t make sense to hang on to them. I spent too much of the game relying on my two staples (the flamethrower and stake launcher) and I can’t imagine that letting players select weapons from a pause menu would have given them too much power, especially since the bosses have such startling amounts of health that I never beat one without exhausting all of my special weapon ammo and finishing it with my base weapon.

Demaster‘s other big problem is the map — specifically, that doors are NOT marked on it. It’s just a grid of rooms and hallways pushed up against each other, with no clear indication of where various rooms’ openings are. 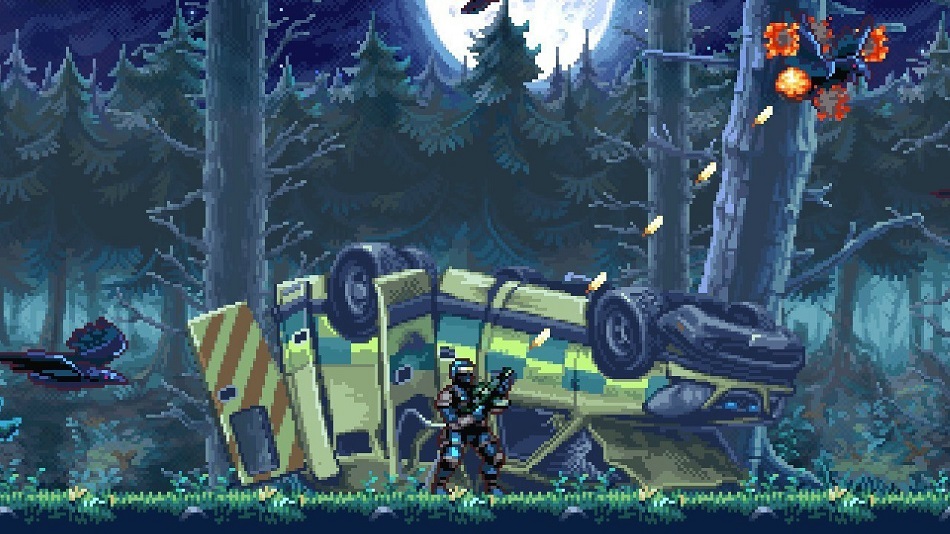 The Metroidvania experience is built on seeing a blocked-off area and wanting to know what’s inside, and coming back when the correct upgrade has been obtained. The Mummy contains three types of doors, each destroyable by a different type of weapon — grenade doors, C4 doors, and shoulder charge doors. Unfortunately, none of them are noted on the map, and it’s far too easy to forget where certain blocked rooms are located when there’s been two hours of hectic gunplay since the last time it was seen. This is a massive oversight, and it makes backtracking for secrets far more difficult than it should be — a significant problem when doing so is the entire point of the game.

Also troubling is the way Demastered handles player death. In a clever move, when the player dies, their corpse is reanimated by the Mummy, and a replacement officer is sent to finish the job. Their first mission? Kill the zombie commando and acquire all of their equipment. It’s a great idea, and it plays out beautifully, especially since the zombie will be armed with whatever weapons the player was using when they died. The problem is that once the player kills the zombie and grabs the equipment, they’re given empty weapons and health tanks.

Ammo isn’t such a problem since there are supply rooms scattered around the map, but there’s no way to quickly restore health. Unlike many others in this genre, Demastered‘s save rooms don’t heal the player. Since players are most likely to die fighting bosses, this forces players to not just kill a heavily-armed zombie, but then spend 5-10 minutes farming health from rats and trash cans until they’re ready to fight the boss again. It’s unnecessarily demoralizing.

Even with those frustrating oversights, The Mummy Demastered is a fantastic example of its genre. There’s great creature and boss design, perfectly designed platforming sequences, and a wide enough variety in environments that it can offer unique visuals all the way to the end. As a tight, confident action title, The Mummy Demastered succeeds not just as a love letter to movie-inspired cash-ins from the ’90s, but also as a legitimately great action game in its own right. And, if that wasn’t enough to recommend it, it’s also a rare tie-in that ended up far better than the movie it was adapted from. Rating: 8.5 out of 10

Disclosures: This game is developed and published by Wayforward. It is currently available on XBO, PS4 and PC. This copy of the game was obtained via publisher and reviewed on the PC. Approximately 10 hours of play were devoted to the single-player mode, and the game was completed. There are no multiplayer modes.

Parents: According to the ESRB, this game is rated E10 and contains Fantasy Violence. Well, the violence isn’t fantastic – it’s all assault rifles and grenade launchers and flamethrowers – but it’s being used against zombies and mummies and giant wolves, so I guess that’s what they mean. Seriously, though, it’s no more traumatic than the old 2D Castlevanias were.

Deaf & Hard of Hearing Gamers: You’ll be completely fine. Any story is presented through text, and the only audio cue is a ‘low health’ ringing that is accompanied by a red-flashing health indicator. It is fully accessible.

I’ve played an hour or two of this. So far, it’s got everything I’ve come to love and hate about WayForward games. It’s very well produced, the animation is excellent, and the gameplay is very bland. I haven’t died once. I really hope the difficulty picks up soon. It may just be my aversion to “Metroidvanias” generally, but the game just isn’t grabbing me yet. I prefer WayForward’s more straight ahead titles (Contra 4, perhaps). I’ll give this one some more time and see how it develops.