I Cut Because I Can 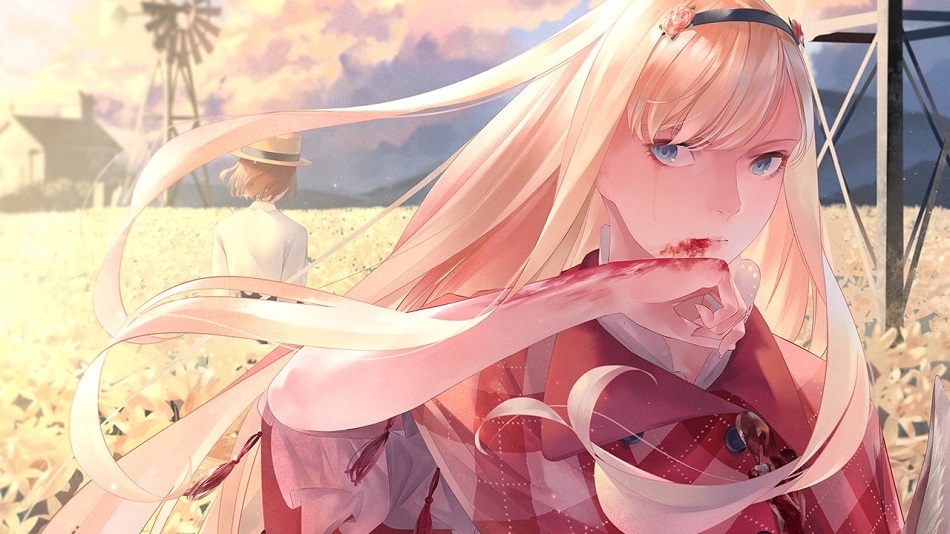 HIGH So, what would self-destruction look like as a monster?

LOW The clock tower is too difficult compared to the rest of the game.

WTF  “So we can reuse D4‘s weird doctor that tells you what’s actually happening, right?”

One of the interesting throughlines in SWERY’s work is how he embraces the mundane, from Deadly Premonition‘s insistence on showering and shaving as a way to ground a bizarre investigation in the real world, to the way D4‘s fixation on cooking shows its housebound hero unable to function outside the domestic sphere. This time, SWERY has set his sights on text messaging, presenting players with typo-ridden blocks of text complete with ASCII art and wonderfully expressive pictures. This phone tells huge sections of the story as the player sees how the main character interacts with people in her life and these exchanges combine to complete the picture of the woman players will spend time suffering alongside.

In this 2D side-scrolling puzzle-platformer, players take control of J.J. Macfield, whose best friend Emily goes missing during a camping getaway to an uninhabited island. As J.J.’s search for her missing companion takes her through increasingly surreal landscapes, it becomes clear that something truly strange is occurring, and if she wants to survive she’ll have to employ her one special ability – immortality.

As powers go, immortality is a good one, but J.J. uses it in a somewhat unconventional way — essentially, she solves all of her problems through self-harm. Turning gears need to be gummed up? Cut off an arm and toss it in. A platform needs to be weighed down? Slice her torso in half and then use her legs as ballast before crawling to the objective. It goes so far that portions of the game even feature JJ’s severed head rolling around, hopping over obstacles through means that aren’t entirely clear to the player. 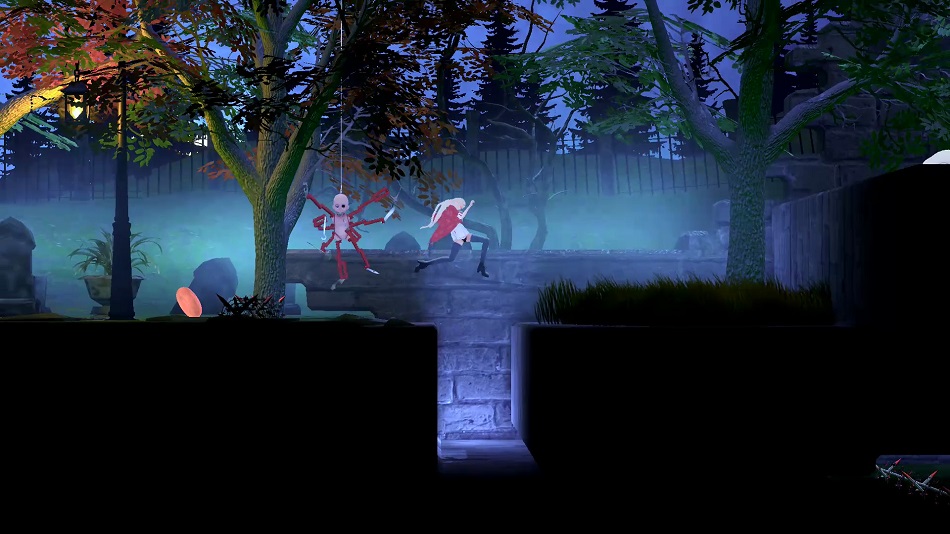 All of the levels are built around these mechanics, and across the five-hour running time, I was amazed to see how many different twists and turns the developers were able to put on this simple formula. Each new area brings such massive changes to environment and puzzle design that I never once felt that I was repeating myself. However, despite this gruesome problem-solving, the most effective aspect of the experience is the extreme torture she goes through, and in this regard The Missing gets into dicey territory that could prove disastrous if handled by something other than the deftest possible hand. Miraculously, the game manages to never feel exploitative or especially gory in its depiction of violence.

As limbs fly off or her body burns, J.J. transforms into a silhouette so that players are forced to focus not on the bloodshed – this isn’t an ‘enjoy torturing Lara Croft’ situation – but on the horrific effects it has on J.J. as a character. Incredible use of sound design and animation keeps things agonizingly grounded, as the snapping of bones and slurching of bloody stumps digs under the player’s skin, forcing them to live with the injuries. Fortunately, J.J. can restore herself with the push of a button, so the experience isn’t a long, drawn-out horror show.

While the gameplay is incredible, The Missing wouldn’t be such an accomplishment if it wasn’t in service of a fantastic story, and once again SWERY doesn’t disappoint. It’s a smaller tale than he normally explores in his work, but the way it laser-focuses on true emotions and interactions ensures that it’s every bit as engrossing. The plot deals with the causes and motivations of self-harm as effectively as I’ve ever seen, and the imagery is placed front and center. For example, multiple enemies are themed around boxcutters, and it’s not accidental. However, just because the game handles it on a metaphorical level doesn’t lessen the effectiveness of its message, especially when the ending manages to tie the metaphorical and literal together in a perfect, powerful way. 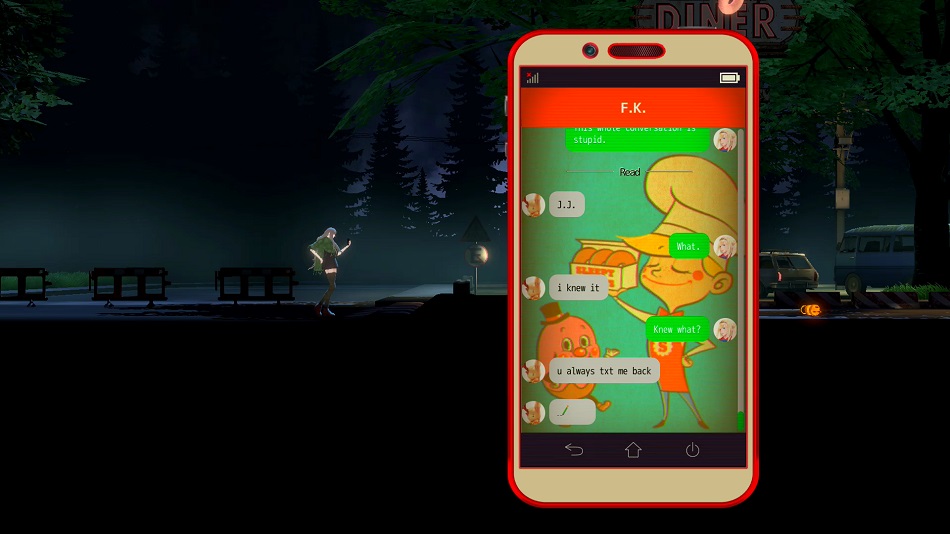 Despite all of these wonderful elements, the game does have a few problems. A couple of puzzles can be easily bugged into a non-functional state, forcing the player to restart at a checkpoint. Also, there sometimes isn’t enough clear feedback to let players know that they’re on the right track towards overcoming their current obstacle. Then there’s the clock tower sequence near the end of the tale — it’s just ridiculous, and forces the player to employ timing skills and careful aiming that haven’t been called for at any other point beforehand. I understand that the end of the plot is supposed to be a heart-wrenching slog, but that can be accomplished without forcing the player to restart half a dozen times or more.

Those rough spots aside, The Missing isn’t just a great game — it’s an important one. It uses grim and upsetting content to put players inside of the mind of a troubled person, then offers them a path towards healing. It doesn’t suggest that overcoming mental and social problems is easy, but it resonates like few other things have in recent memory. I can’t say that I personally related to J.J.’s struggle, but by the end of the story, I can say that I felt her pain — and isn’t that what art is for? Rating: 9 out of 10

Disclosures: This game is developed by White Owls and published by Arc System Works. It is currently available on XBO, PS4, Switch and PC. This copy of the game was obtained via publisher and reviewed on the XBO. Approximately 5 hours of play were devoted to the single-player mode, and the game was completed.There are no multiplayer modes.

Parents: According to the ESRB, this game is rated M and contains Violence,Blood,Drug Reference, and Strong Language. While I won’t give spoilers, I’ll make something clear for the parents out there – this is a game about suicide among young people. It’s shocking and heart-wrenching, and an important and mature take on the issue. I could see letting older teens play it because they could likely get a lot out of it, but make sure it’s with your supervision.

Deaf & Hard of Hearing Gamers: I played sections of the game without audio, and had no gameplay difficulties. There are subtitles (which cannot be resized) for most dialogue, but a few key audio pieces – such as the cruel whispers of a shadowy crowd, are not subtitled. 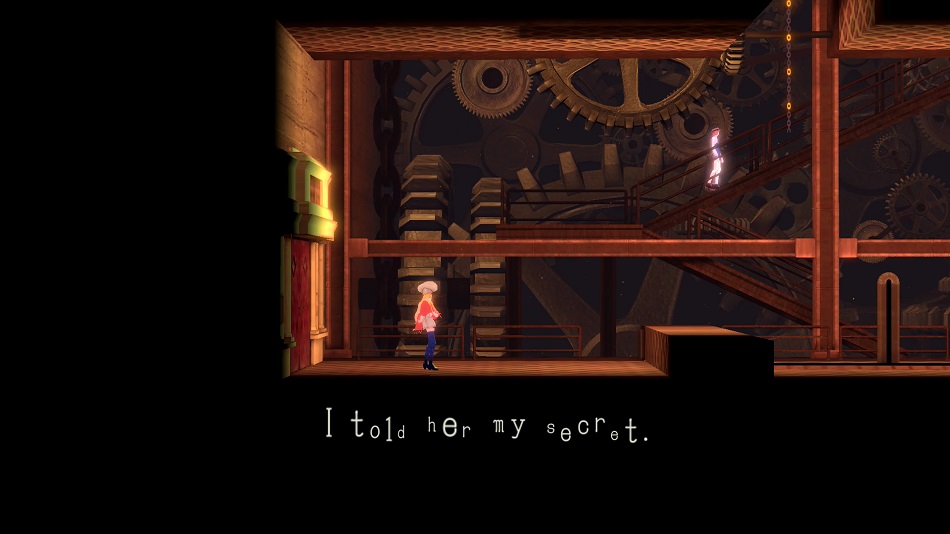 Remappable Controls: The game’s controls are partially not remappable. While the player will be stuck using the left thumbstick to move J.J., the face buttons’ functions can be reassigned. 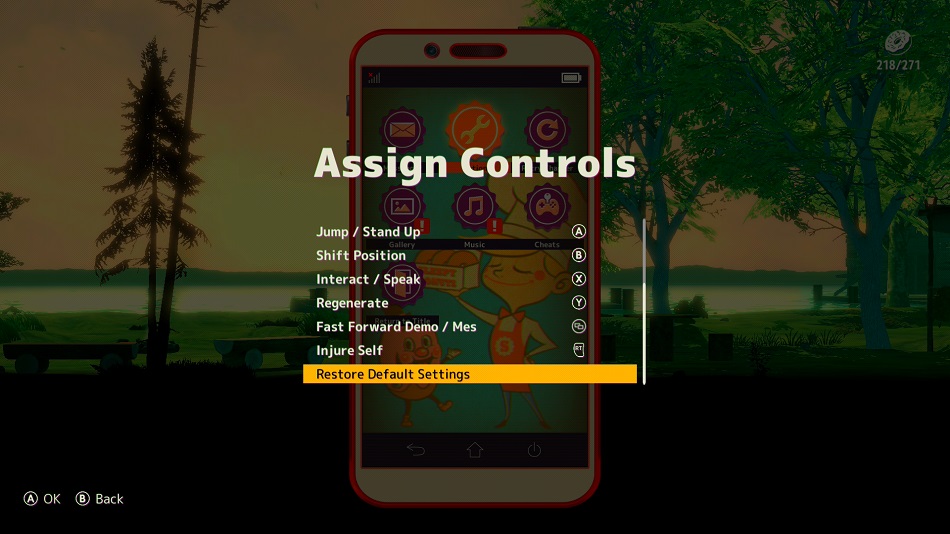 “In this 2D side-scrolling puzzle-platformer, players take control of J.J. Macfield, whose best friend Emily goes missing during a camping getaway to an uninhabited island.”

Hmmm, I suppose you’d want your girlfriend to be your best friend too… But like these aren’t gals just being pals if the opening 10 minutes is to be believed

We should not discuss story elements in a public space for reasons of spoilers. Have you finished the game?

About halfway through. Will eat crow if my views change. They literally make out in the first ten minutes, so it would be weird if they roll that back