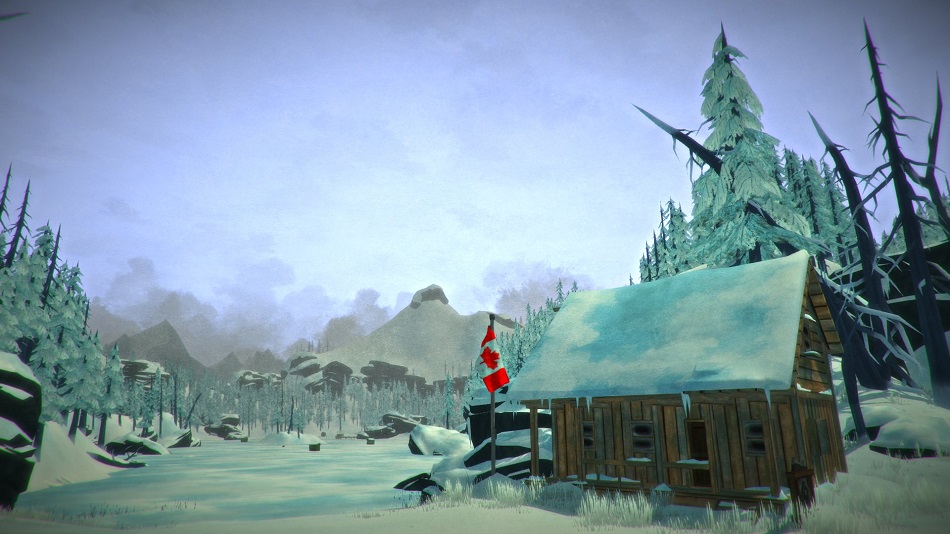 HIGH Firing a flare gun into a bear’s eye, sending it fleeing for the hills.

LOW The two times the game crashed, erasing my save file.

WTF How hungry do you have to be to break a bunny’s neck?

I play pre-release games. I’m used to bugs, crashes, placeholder mechanics and graphics. Those things come part and parcel with writing previews. If any of them wind up in a finished game, that’s another issue entirely, but by and large a little roughness is to be expected from an in-progress game. One thing I won’t accept, not in a beta and certainly not in a release version, is a lack of respect for the player’s time.

I extensively played the PC and XBO alpha versions of The Long Dark during its four-year journey to release, and while I ran into my fair share of bugs and crashes during that time, never once did the game erase all of my progress, wiping out save files and rendering all the time I’d spent with my characters a complete waste. No, it took the fully-released PS4 version to do that. Then the developers released two patches in quick succession. And then? It erased my save file again.

As a hardcore survival sim set in a post-disaster Canada short on technology and long on snow, The Long Dark gives players a first-person perspective on a beautifully painted world full of hostile creatures and a cold indifference. The play is split into two modes, a story-based campaign and  a randomized roguelike option. In either, players are tasked with learning to survive by scavenging, foraging, and eventually hunting to build up the stock of wood and food that will be necessary to keep them alive for another day.

In the rogue-ish mode, the survival gameplay is remarkably well-designed. Players have to keep track of their body temperature, hunger, thirst, and fatigue. Scattered around the various open-world maps are buildings to be explored and bodies to be searched, all of them containing valuable food, matches, or crafting materials. The landscape is bleak, with much of the challenge coming from balancing the risk of earning vital supplies against being in an environment that constantly saps their stats until they eventually die of exposure. As the title suggests, things get dark fast, and not just because there’s only about eleven hours of sunlight in each game day. 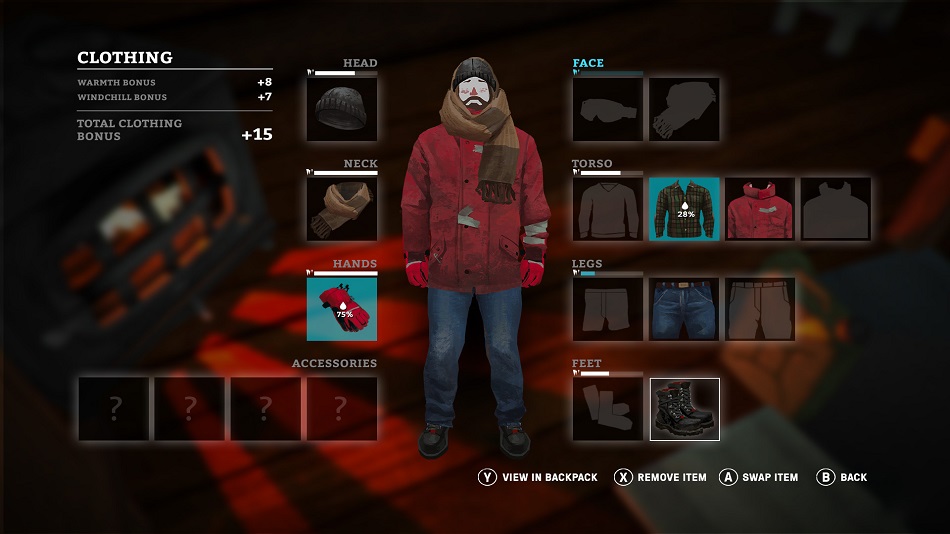 Clearly a great deal of thought has gone into the game’s systems, as the developers have included both manufactured and scavenged versions of items to solve every problem that comes up. While there are easy calories to be found in packaged food, the game only spawns a finite amount. In contrast, wild plants and animals are constantly replenished, offering unlimited sources of sustenance that are much more challenging to obtain. Likewise, there are both pharmaceutical and natural remedies for all of the dangerous illnesses that can befall players. Why pour hydrogen peroxide over a wound when wrapping lichen around it will prove just as effective? Even hunting weapons have two versions – a powerful rifle with limited ammo or a bow with craftable arrows.

With no manual saves, players will feel the tension of every resource-gathering excursion. Everything is risky in the world of The Long Dark, with dangers from ravenous wolves to thin ice being capable of stopping the game short. Even food isn’t completely safe – sustenance players find (or hunt) degrades at an unrealistically fast pace, and the lower the quality get,s the more likely it is to cause food poisoning. It’s not necessarily a death sentence with the right medication and plenty of bed rest, but if a player is already freezing and huddled around a dying fire in a dark cave, opening the wrong can of beans can be the final push over the edge.

Looking at the narrative mode, The Long Dark‘s campaign does a great job of acting as an extended narrative tutorial to acclimatize players to the world of northern survival, although only two (of five) episodes are currently available. The plot follows a bush pilot who crashes on a remote island already suffering from economic and environmental collapse before an electromagnetic disturbance shut off all the technology.

The story is a solidly-authored experience with quests to complete, characters to meet, and cutscenes to watch. In this mode, the randomness has been massively dialed back, with everything except wildlife carefully distributed to provide the smoothest experience for players. While the gameplay of the roguelike mode is still there, the script is an overwrought bundle of cliches that I desperately hope develops into something more interesting with the release of the final three chapters. 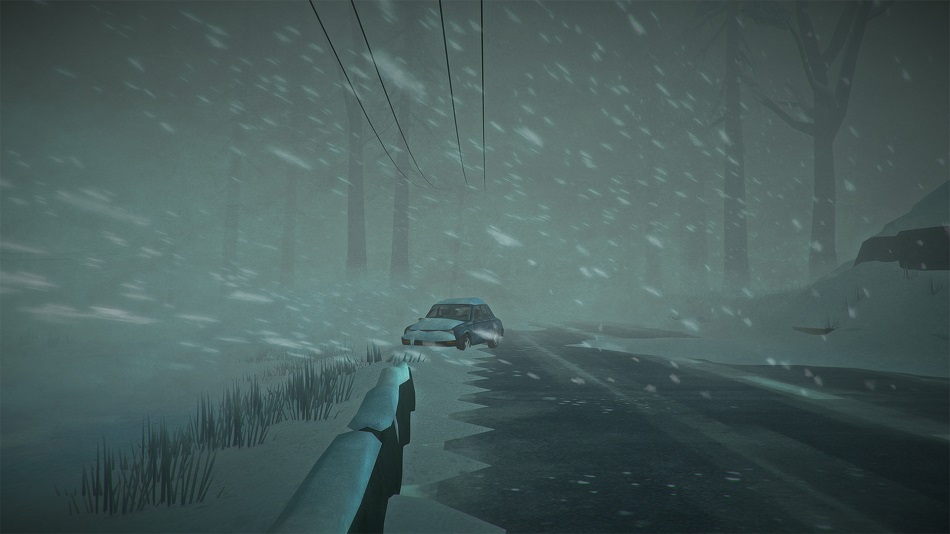 Frankly, I’m at a loss as to how such wrong-headed decisions about the plot ended up being made. It’s as if the developers didn’t trust that their premise was interesting enough, so they piled contrivance after contrivance on top of it. A bush pilot crashing on a remote island and trying to survive is a solid hook. Why did Hinterland think that the pilot’s passenger had to be a scientist attempting to get a vitally-important briefcase to a remote area for reasons she refuses to discuss? Or that the bush pilot and scientist had to be a divorced couple who split up after the death of their son? Or that the magnetic anomaly precipitated a major prison break on an island which is so small and remote that it shouldn’t even have highways, let alone prison buses rolling down them. Cabela’s Shadows of Katmai was less preposterous than this, and that game was ridiculous.

Story concerns aside, The Long Dark‘s biggest issue are the bugs — be warned that in its current state, it crashes all the time.

In my twenty hours I saw fifteen crashes, with two of them wiping out save files and erasing a combined twelve hours’ worth of gameplay. It’s bad enough that the lack of manual saving or periodic autosaves means that crashes always reset some amount of progress, but the fact that game profiles aren’t backed up in any way is completely inexcusable. That a game this high-quality could contain such fatal data glitches is an insult to its players.

I’ve been passionate about the development of The Long Dark since its announcement in 2013, and when it works, it’s at the absolute top of the hardcore survival genre. The world is expansive and detailed, demanding to be explored. Mastering the systems provides concrete rewards, truly giving players the sense that they’re learning to survive, and becoming more successful because of it. It’s too bad that the game is so unstable at the moment — when it’s actually finished, The Long Dark will probably be an incredible survival experience. Right now on the PS4? It’s too buggy and hostile to recommend.Rating: 6 out of 10

Editor’s Note: This review was written after the second update prior to official release. According to the developers, Patch 1.06 was implemented after release and “Introduces stability improvements and crash fixes.”

Disclosures: This game is developed and published by Hinterland Studio. It is currently available on PC, XBO and PS4. This copy of the game was obtained via publisher and reviewed on the PS4. Approximately 20 hours of play were devoted to the single-player mode, and the game was not completed. There are no multiplayer modes.

Parents: According to the ESRB, this game is rated Teen and contains blood, violence, and language. It’s kind of a bleakness festival here since this is a game about clinging to survival in a world crumbling around the player, absolutely packed with the frozen corpses of those who failed at what the player is attempting. There’s hunting and skinning as well, and a sequence which, alone, should have earned the game an M rating — early in the game, without access to decent weapons, players have just one option for hunting meat – they must throw a rock at a rabbit, then pick it up and manually break its neck. The sequence is difficult to watch, and I can’t imagine letting even young teens play it unless they already hunt and fish, in which case, go nuts.

Deaf & Hard of Hearing Gamers: While the game is playable, there are no visual cues to let players know about the approach of deadly wolves and bears, which can end a perfectly successful game in a hurry with no warning. Consider playing the game on the lowest difficulty setting. All dialogue is subtitled, which includes the player character offering necessary information about their condition.

Now, 4 years after release the game still is not finished, with only 3/5 episodes released. All the above statements are still true, especially about bugs. Losing your savegame because your game crashed mid save is common. Complaining and talking about the game’s faults in forums and some review sites gets the thread or review deleted. What started out as a hopeful first title of a new studio remained their only release, which they ported to every new system they could and stopping active development therefore. The ideas brought forward by the community over the last 4 years were largely… Read more »