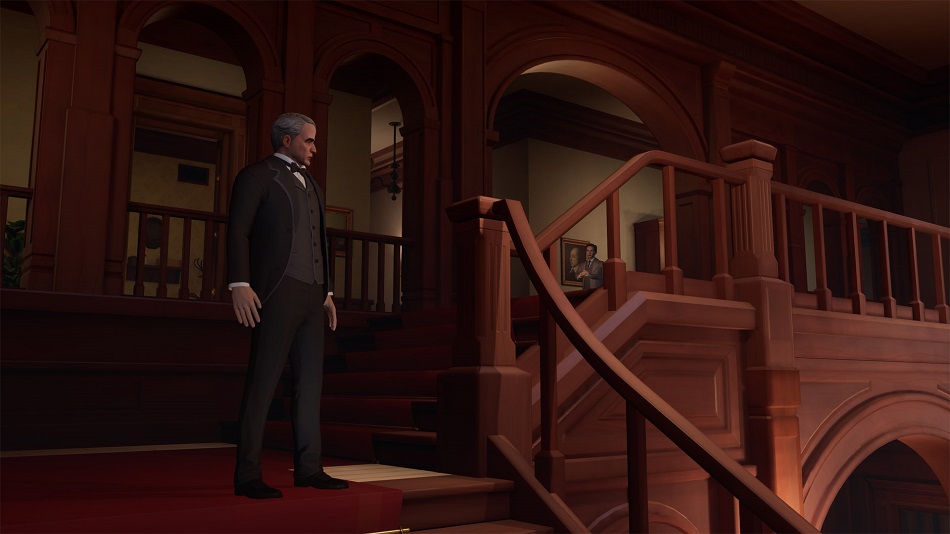 HIGH Finding out what happened to the umbrella.

Two months ago I was reviewing Night Trap, and while I can’t say much for that title’s attempts to be a game, I found the concept of being able to watch any part of its story quite interesting. Honestly, it was the only good part of an otherwise dire experience. Little did I know that just a couple of months later I’d see a developer take that exact idea – a story that happens in multiple locations simultaneously and the player can witness any part they choose – and raise it to a near-perfect level. The Invisible Hours wasn’t just a surprise, it was a delight.

A murder mystery set on an isolated island, TIH‘s plot kicks off as a disgraced detective is delivered to a dock, responding to an invitation by eccentric inventor Nikola Tesla. Or does it? Perhaps the story starts with a woman weeping in a gazebo during a driving rainstorm. Or maybe the real beginning is seeing a blind butler going about his duties in an enormous mansion?

Tradition would suggest that the game begins with the newcomer, but the genius of The Invisible Hours is that there’s no requirement that it do so. Taking on the role of a silent observer, players are free to explore the island at their own pace, searching the grounds for clues, ransacking rooms, reading diary entries and collecting photographs. With full control of time, players can pause, fast forward and rewind at their own pace. The story doesn’t advance unless the player wants it to, so they have all the time in the world to take in the stark beauty of the craggy island and its beautifully-designed house.

While the player can’t actually affect the story, the complete freedom to explore every part of it is an incredible substitute. Followed a character into a room where they discovered a body? In a standard game, players would have to figure out who did it. In this interactive experience, all they have to do is sit next to the body and start rewinding time until the murderer shows up, and they’re free to watch the crime as it happens. Having access to the entire story all at once is a revelation, and there wasn’t a moment where I didn’t find some new turn in the plot that I hadn’t expected. 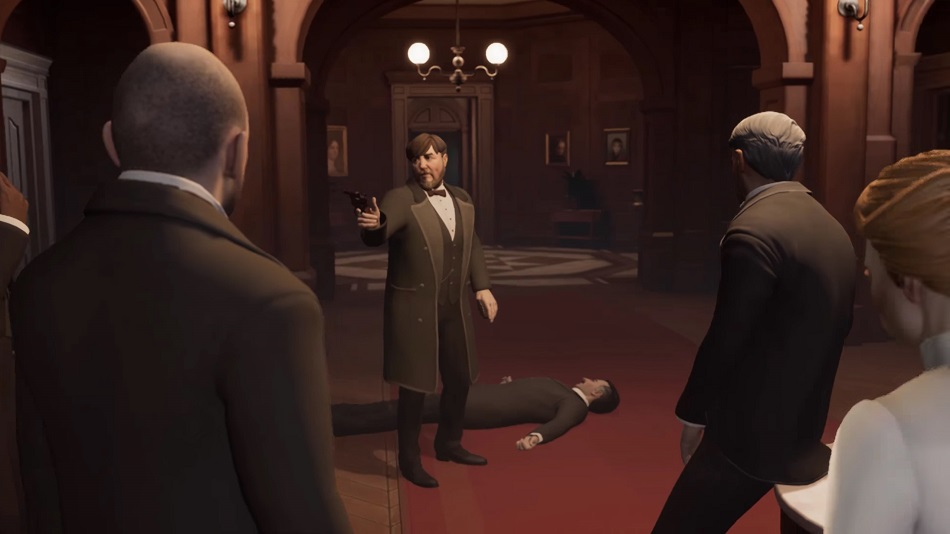 Sadly, I can’t divulge even a single detail of the plot for fear of spoiling its many fantastic reveals. The Invisible Hours hides its secrets well, and players who want to truly understand every motivation and backstory will have to rewind countless times, return to earlier scenes, and follow several characters as they question, threaten, and attack one another. It’s an extremely well-written and well-acted story — the kind of layered and complex whodunit that could stand on its own in novel, play, or film form, but finds the ultimate realization of its potential here by choosing to flood the player with information rather than meting it out one tiny slice at a time.

The Invisible Hours‘ only real issues are ones of control. Using the standard PS4 controller, players are restricted to teleportation-based movement and slice-based turning. It’s a tragedy since the setting begs for players to be able to glide through while following characters along their routes towards secret rendezvous. Instead, players can lock onto characters, and then the camera automatically moves to pre-selected camera angles chosen to best view their storyline. This viewing mode can be left at any time, so players aren’t trapped into using the developers’ point of view, but a little more freedom of movement would have improved the experience.

There are also a few technical issues with the many notes scattered throughout – the game often has trouble loading high-resolution readable text versions unless they’re held at just the right distance and angle, which is frustrating. Players always have the option to press a button and have the note read to them aloud, but it’s a poor substitute for the immediacy of actually reading a piece of text.

Aside from the technical issues, The Invisible Hours is a masterpiece. It takes the best elements of live theater and videogames, and melds them into a mystery experience like no other. Halfway through my time with it, I found myself wishing every mystery could be told in such a dense and thorough manner. This isn’t just a successful narrative experience, it serves as a proof of concept that any number of stories could be told using this same format. The Invisible Hours is a must-play for mystery fans, a must-play for VR players wanting an entirely new experience, and a must-play for anyone interested in getting in on the ground floor of a bold new concept in visual storytelling.Rating: 9 out of 10

Disclosures: This game is developed by Tequila Works and published by Game Trust. It is currently available on PCVR, and PSVR. This copy of the game was obtained via publisher and reviewed on the PSVR. Approximately  4 hours of play were devoted  to the single-player mode, and the game was completed. There are no multiplayer modes.

Parents: According to the ESRB, this game is rated T and contains Blood, Mild Language, Use of Alcohol, and Violence. This shouldn’t prove too shocking, even for younger teens. There’s some violence, of course, and a couple of mildly disturbing images, but nothing extremely shocking. Alcohol consumption is both discussed and depicted, but in the game’s most anachronistic touch, I never actually caught anyone smoking.

Deaf & Hard of Hearing Gamers: I played a good amount of the game on mute and had no trouble. There are subtitles available for all dialogue. It’s fully accessible.