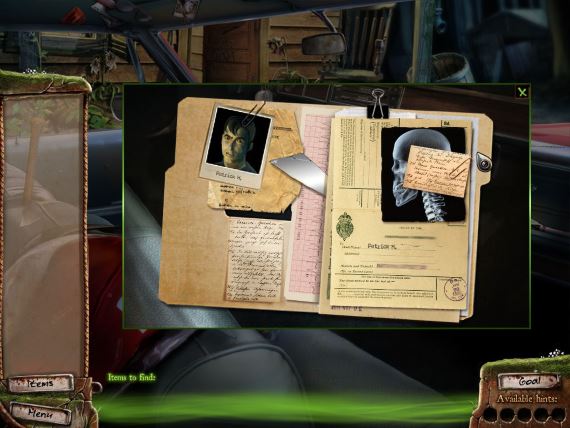 Campfire Legends: The Hookman was my first hidden object game. I bought it as part of a two-pack with its sequel, 'The Babysitter' while waiting for someone to arrive at a Walmart. At the time I didn't even know what a hidden object game was, and picked it up on a whim, expecting some kind of horror-themed interactive fiction. What I found instead was my new favourite genre, in which characters search through messy rooms in order to find the clues necessary to escape tense situations and solve crimes. I was hooked right away by this game's story – the framing device features a group of girls telling stories around the titular campfire, with the action taking place within the story being told.

As for the story itself, it's a classic of the genre – girl goes to a spooky cabin with her boyfriend, they're menaced by a man with a hook for a hand, and they have to take extreme measures to escape him. What separates Campfire Legends from generic versions of this story is what a strong lead character it has, and how well she deals with the obstacles that she comes across. Christine is simply the handiest horror heroine I've ever encountered. Lights out in the cabin? She'll track down fuses! Radio shattered by a madman's claw? She'll jury-rig it with spare parts from a broken television! Car has a flat? She pulls out a jack and a wrench! While it's clear that all of these character traits are determined by the kinds of puzzles that the developers wanted to include, the end result is that Christine winds up being characterized as incredibly competent and self-sufficient, and absolutely never feels like a victim. It's a nice twist in the genre. Her only weakness seems to be her fondness for her incredibly shady boyfriend Patrick, who disappears from the story at key moments, acts super-suspicious, and manages to convince her to head out for a romantic fire by the lake when she already knows that there's a hookman on the loose. Ah, young love.

Not by any measure. It a little unfair to grade Campfire Legends games based on these criteria, given that they were developed with these games specifically in mind. Still, I'm already here, so… The environments in Hookman are completely believable because the developers went out of their way to make them completely internally consistent. I've been in garages and sheds as cluttered as the one in the game, and the cabin itself is a mess because a hookman recently trashed it. The developers really went the extra mile to make sure every location makes complete sense while still being enough of a mess to provide for satisfying hidden object searches.

They are absolutely, 100% justified. Christine is never asked to look for anything she doesn't absolutely need. Sometimes that's rocks to scare a cat, sometimes it's car parts, and sometimes it's pieces of an ornate sliding block puzzle; it's never random dross designed to pad out the running time. Christine has lots of minor obstacles to overcome throughout the game, so there's plenty of searching to be done, but it's never arbitrary or pointless – and I can't stress how far this goes towards pulling players into the game. By never asking Christine to locate five playing cards, a roman numeral, and a series of books, the game creates a grounded sense of place that's so often lacking in other titles.

Better than almost any other HOG. Christine finds herself faced with entirely relatable problems and solves them in completely logical ways. Things can get a little wonky when the occasional puzzle box appears, but by and large everything in this game follows a totally sensible path, which reinforces the characters and situation to the point where I'd go so far as to call it one of the best stories in hidden object gaming.

That's not to say the game is perfect – it's at times crippled by a frustratingly outdated hint system. Rather than offering players the standard refilling bar, The Hookman asks them to track down difficult-to-find 'fireflies', with each one revealing the location of a single missing item, or a clue to its location, if they're not on the correct screen when the firefly is used – that's right, the game doesn't even offer free hints if players are on the wrong screen. It's inexcusable. Even worse is the puzzle skipping – bad at block sliding puzzles? The game will allow the player to skip them – at a cost of five fireflies – which is as many as can be carried at one time. It's a terrible system which mars an otherwise spectacular hidden object game.

I can't recommend this one highly enough – it turned me into a lifelong fan of the genre, and if the fiddly hint system is overlooked, it's the best that hidden object games have to offer.

Are you curious about what the game looks like if played with commentary, or just too busy to actually play it yourself? Don't worry, I've got you covered with the following YouTube link! It's a playlist of my playthrough of the game! Enjoy!