It’s time to take a look at Deadly Premonition‘s claim of being the first true “open world” horror videogame. A claim that, while technically true, may mislead people about what kind of game they’re going to be playing. You see, while Greenvale is a realistically large town, in that it seems like it could (just) contain the 500 people we’re told live there, the game never breaks from the realism of the situation, or allows the player to go hog-wild with York’s actions, so there’s a realistically small number of things that can actually be done while tooling around Greenvale in a borrowed cruiser.

Let’s take a look at a map of Greenvale, shall we? 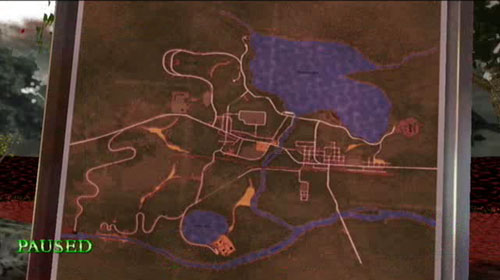 That map means one thing—it’s time to discuss another of the game’s unforgivable design errors! Note what a huge area of land the game’s map covers—certainly a change for a horror game, which generally attempt to ramp up tension by locking players into tiny areas, keeping them there with the threat of instant death if they wander away from the prescribed path. Anyone remember the dogs at the front door in the first Resident Evil?

With all of this freedom comes two huge drawbacks. 1: navigating is, to put it in the nicest possible fashion, a bitch. The map exists in two states—fully revealed, as you can see above, or way too zoomed in: 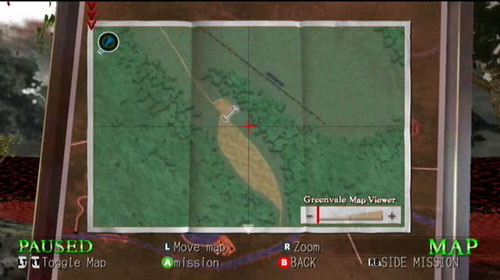 You can actually zoom in even further if you’d like, although I can’t imagine a situation that would require you to do so. It’s not like the game features any hedge mazes. Adding insult to injury, the zoomed-in map rotates to match York’s current facing, while the overall map remains static with north (basically) at the top. Which means just figuring out exactly where you are in town can be something of a chore. Try, for example, to determine where on the large map that small visible section above is located.

Not easy, is it? Now, to be fair, once you’ve spent an hour tooling around Greenvale’s back roads, liberating human bones from a pack of stray dogs—

You’ll have a pretty good sense of where everything is located, and be more than capable of driving around instinctually. Of course, spending a couple of hours learning the layout of a fictional town while driving a virtual car with horrible handling is something that nearly no one wants to do, which is why I’ve counted it among the game’s crucial flaws.

That’s the main drawback to offering players a realisitcally large rural village—it takes a realistically large amount of time to get anywhere. While it may not seem excessive in the real world to have to drive for three minutes to get from your hotel to the police station, doing it ten or twenty times over the course of a game quickly adds up to inconvenience and frustration. Especially when the driving isn’t in service of the main plot, but rather to take part in time-wasting fetch quests that don’t really seem like they have any place in a largely real-world based murder mystery. But driving around picking up trading cards with the faces and bios of the various characters in the game is just another one of those things you’ve got to just accept if you want to get into the world of Deadly Premonition. And at this point, really, why wouldn’t you? 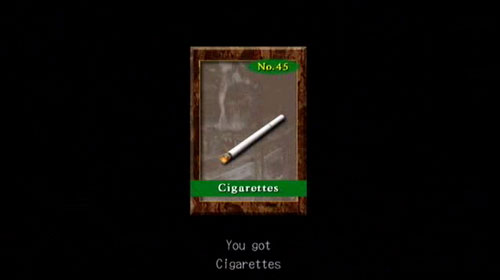 Oh, right, because games don’t generally ask you to slowly drive back and forth across a realistically large town. Of course.

Well, have no fear, because Deadly Premonition isn’t all crippling gameplay flaws—next time I’m going to point out a ray of light that cuts through the dark clouds of design ineptitude that hang over huge sections of the game, so rest assured, even though I’ve pointed out some giant problems with the game, if you actually head over to Amazon and buy a copy of Deadly Premonition, and then read the very next article in this series, I will let you in on the two secrets necessary to get through the game with minimum possible hassle.

Two secrets that, had they just been plainly explained in the game’s manual, I’m sure would have swung the game’s Metacritic average about 15-20 points north. Assuming, of course, that video game reviewers actually read manuals. I honestly have no idea if that’s the case.

Next time: The Manner in which Unforgiveable Design Mistakes can be Overlooked (Deadly Premonition is the Game of the Year, Part 7)

I loved the sidequests. It’s entirely possible to tear through the main story without doing any of them (which is what I did on my first playthrough), thus nullifying any tension between my goals and those of the characters. Then I went back to see all the character development I’d missed. I’ll probably play it again, keeping all this in mind. If you ask me, the game structure actually works better for this type of story than the televised serial format of Twin Peaks (BLASPHEMY!!). Even the show’s most vehement fans will tell you there are easily several subplots of… Read more »

Sparky- I’m largely fond of the side missions (they’re covered more in the next post)- with a couple of exceptions I felt they did a good job of making it feel like York was actually getting the chance to investigate non-essential parts of the case. After all, you never know where the big clue is coming from, right? Especially when doing those investigations lets you feel like you’re eliminating suspects, or getting closure on parts of the story. Alv – The Amazon links are there because I want everyone to play this game – if there’s even the slightest chance… Read more »

[quote=Daniel Weissenberger]1 – We’re not being paid in any way for these articles. 2 – It’s not a joke. 3 – Yes, Deadly Premonition is actually that good while, at the same time, being terrible when using most of the metrics normally employed to judge a game’s worth (graphics, gameplay, etc). Why am I writing this much about the game? Because somebody had to – the game honestly deserves to be spotlighted more extensively than any other title out there – because there’s more to be said about it than almost any other title out there.[/quote] Great, in which case… Read more »

Man, somebody should have told me about our special deal with SWERY before I gave Deadly Premonition a 4. Brad, Chi, you’re asleep at the wheel! Anyway, Dan has done something this long, if I recall correctly, for Dead to Rights. It’s just that it was crammed into a single absurdly long post instead of distributed into shorter essays. Moving on to something less stupdenously silly, I’d like to hear more of your thoughts on the usefulness of this structure, Dan. You don’t seem to have been too enamored of the side-quests that were available, but in one of our… Read more »

1 – We’re not being paid in any way for these articles.
2 – It’s not a joke.
3 – Yes, Deadly Premonition is actually that good while, at the same time, being terrible when using most of the metrics normally employed to judge a game’s worth (graphics, gameplay, etc).

All these articles you’ve written about Deadly Premonition has got me seriously intrigued. I’ve not read them in detail as I don’t want to spoil the experience but when it’s finally released in my neck of the woods (end-October) I’ll make sure to give it a go. BUT I appreciate the effort you’ve gone to in really expounding the virtues and exposing the flaws of the game, but truly, I cannot remember such lavish attention given to a single game before. Not even blockbusters get this kind of attention. I mean SIX (6) carefully prepared articles with screenshots carefully selected… Read more »