Playing the wrong half of the story 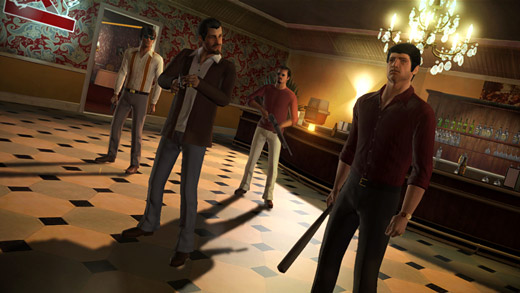 HIGH I got to shoot Castro. That's interesting, at least.

LOW The part where the game tries to explain that killing a drug-addicted prostitute is basically a public service.

WTF So Robert Duvall was too good to be in Godfather III, but he'll be in the mediocre Godfather video games? How bad was that movie?

There's no tragedy in the world of North American video games. No pathos, no sadness, no hard choices, no pyrrhic victories, no noble defeats. The bad guys must be annihilated unless a sequel is planned, in which case it's just the immediate villain who winds up completely obliterated, while an overall threat remains to fuel future entries in the franchise. This creates something of a problem when trying to adapt other media into a video game, since things like novels and films often use elements such as those to create complex drama, and multi-faceted narratives, whose grey-shaded morality can get in the way of the shiny feelings people are supposed to have when the Strogg orbital super-weapon explodes and the credits roll.

This need to give absolute support to the actions the player takes, constantly reaffirming that what they're doing is a "positive" thing, provides one hell of an obstacle when the central point of this game's source material is that the mafia, created to protect a segment of the lower classes from abuse and exploitation, quickly became the exploiter it was devised to defend against. Which is my long-winded and over-elaborate way of saying that The Godfather II fails spectacularly as an adaptation of the film.

In sharp contrast to the movie, the game's story has no depth or consequence. Even compared to the previous game, this one is lightweight. Last time around the developers crafted a parallel story that wove in and out of the film's narrative, showing the rise of a random mobster who carried out a few of the murders depicted in the film. This game doesn't even put in that much effort. The main character of Godfather II (the game) remains a cipher, his role relegated to busywork at the edge of the storyline, every now and then delivering a few of Tom Hagen's lines from the film. 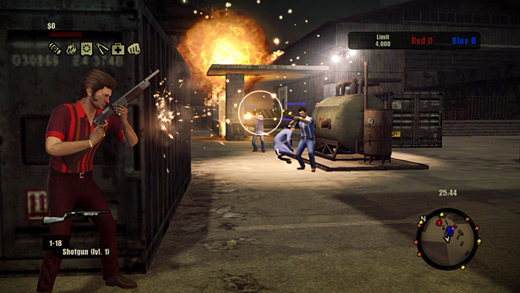 The biggest problem is that there's just not much meat in the source material to build a videogame around. While the first one featured gunfights and thrilling escapes, as well as a denouement that revolved around a mass execution, The Godfather II is a much more austere picture, concerned mainly with low-key conversation and grand betrayal. With the storyline scripted in a film some thirty years ago, the player can't have any real impact on events, so, all that's left is for the main character to engage in a little non-canonical Florida empire building, busting up businesses and taking over rackets. If that sounds familiar, it's because it was the exact formula the developers struggling to turn Scarface into a game happened upon.

If the gameplay has nothing to do with the story, at least it manages to be passably entertaining. Improving on the previous game's mechanics in every way, the biggest change is that this time around the player has access to an overview map from which they can manage their criminal empire. The management elements don't go very deep; it's just a matter of assigning soldiers to guard friendly businesses, or attack hostile ones. The businesses have undergone a change as well. Now instead of just offering money each day, they provide a powerful bonus. Like a violent game of Monopoly, every property is colour coded to form a series of "crime rings", and owning a full set imbues the player with a special ability, like armored cars, flak jackets, or incendiary bullets. Nice to know I'm not the only fan of Alone in the Dark out there.

The other new feature is the named henchmen given to both the player and the rival mobs. On the player's side, these henchmen have abilities that can prove helpful in attacks on enemy compounds, such as planting bombs and cracking safes. The enemy henchmen are not only tougher than normal soldiers, they can also be dispatched to defend a mob front while the player is attacking it. The fact that the timely appearance of a well-armed lieutenant can turn the tide of a battle is means that killing off all of a rival mob's "made men" is a vital priority. In an interesting riff on Saint's Row's hitman missions, the mob lieutenants can only be killed in a specific manner—if the player doesn't perform the right execution or use the right weapon, they'll just wind up in the hospital for five minutes before going back to work. At first it seemed a little cheap and fussy, but then I really started to appreciate the novelty of fighting foes who were as resilient as playable characters.

Yes, the gameplay is entertaining and works well enough, it's just too bad that it's all in service of such a predicable, and often laughably-stupid game. It would seem like the violence, nudity, and the fact that it's based on a slowly paced 3 hour movie from thirty years ago might all suggest that this is a game aimed at adults, but the plot is so underdeveloped and insulting to the intelligence that I can't imagine many adults being able to make it to the end. The game opens with the new year's 1959 attack on Havana, yet for the rest of the game the player is free to fly in and out unmolested, and take over businesses just like it's New York or Miami? This game purports to take place in the real world, so it's a little strange to see a mobster muscling people and committing crimes unimpeded in post-revolution Cuba. 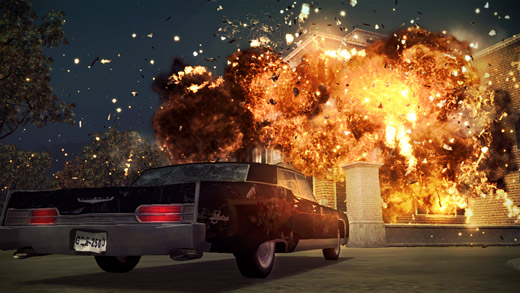 I'll admit there's some unintentional fun to be had watching the developers desperately trying to inject some action into the storyline. In the last game the thrilling final missions involved rushing around town to murder mob kingpins. This time the player is asked to rush around New York… to deliver an old man to a Federal Courthouse so he can sit in the gallery during a hearing. Of course, that's all just harmless idiocy—the part that really feels insulting to the player's intelligence is the way the moral complexity has been stripped away, especially in the character of Hyman Roth, the game's villain. Gone is any mention of the character's motivation for attacking the Corleone family, which is kind of a huge loss—after all, since people playing this game would have likely played the first Godfather game, they would have, in a sense, been personally responsible for the death of Moe Green, making the player the person Hyman Roth was angry with. Leaving that speech in would have given the game scope that extended beyond this single title, and provided resonance for someone who had played both titles. Not that there's any evidence that involving the player emotionally was ever a goal of the developers.

I think the craziest thing about this game is just how utterly misconceived it was. I'm not saying they shouldn't have made a Godfather II game, I'm asking why they made this Godfather II game. As anyone who's seen the film knows, the story is broken into two halves, telling parallel stories in the lives of Michael Corleone and his father Vito. Let's look over the Vito storyline for a moment: His entire family is murdered by the mob in Sicily, and he flees to America. Growing up in turn-of-the-century New York, he turns to crime because it's the only avenue for advancement available for him. With a combination of ruthless violence for his enemies and fair dealing for his friends, he grows more and more successful. Finally he returns to Sicily and murders the mob boss who had his family killed, now an old man.

That's practically a video game story already! It's got a good revenge line throughout, building an empire is an integral part of the plot, and the setting, turn of the century New York, isn't something we've already seen in other games a dozen times over! So why, when looking at the two storylines in this film, did the developers of this game decide to make the one about the guy who spends most of the movie sitting in rooms and speaking so quietly you have to lean forward to hear him, rather than the one about the guy who threatens corrupt landlords into lowering widows' rents and sneaks across rooftops to stealthily murder mobsters? This isn't a rhetorical question. I'd really like to know what the hell they were thinking.

If Scarface, Saint's Row, and The Godfather proved anything, it's that Grand Theft Auto's formula is a winning one, and basically anyone with the money to exploit that formula can make a fun, playable title out of it. The Godfather II's failure is that, outside of the most utilitarian sense in which it is a smoothly-playable game, it doesn't accomplish anything at all. The brand name is utterly wasted here, not because it can't be adapted into a video game, but because the developers lacked the vision or ability to understand how. Rating: 6.5 out of 10.

Parents: According to the ESRB, this game contains blood, drug reference, Intense violence, nudity, sexual themes, strong language. That's right parents, in addition to the omnipresent violence, foul language, and main characters who deal drugs, the game also contains completely gratuitous nudity in all of the strip club and whorehouse locations! There's absolutely no reason to ever let your children play this game. If they're under 17 and tell you they want to play it because they're big fans of the movie, they're lying. It's much too slow paced a movie for someone of that age to enjoy.

Deaf & Hard of Hearing: Dialogue is subtitled, so you won't miss out on any of the story, and a handy mini-map always lets you know where any nearby enemies are, so you don't have to worry about hearing them shooting.