I Didn’t Remember Dragons Being So Big 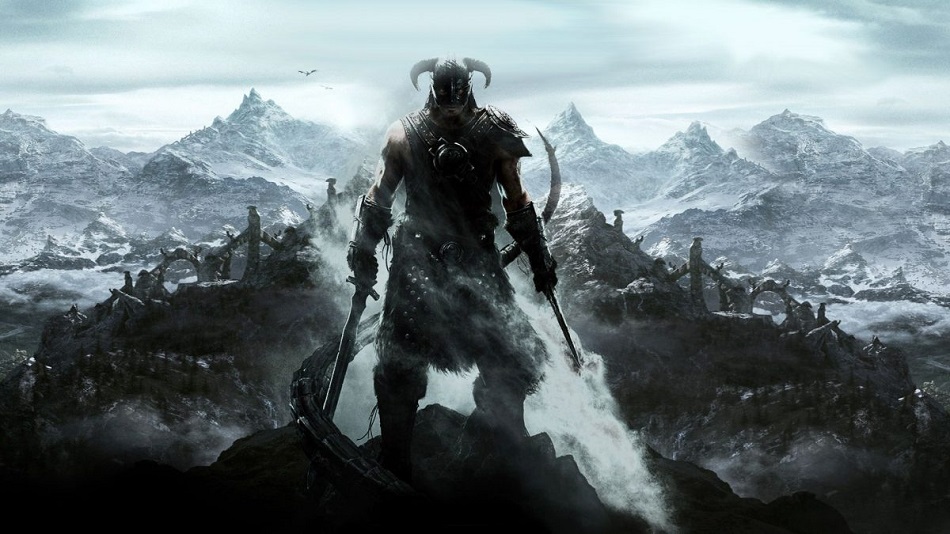 This is not a review of Skyrim. Six years after its release, what would be the point? There are few vertebrates left in the world that aren’t aware of Skyrim‘s charms. The huge frozen world, the fearsome dragons, the abundance of quests and characters – it’s all been celebrated to the point that the loudly-sung praises still echo across internet. No, what I’m here to do is address how the game works now that players can experience the world from the inside a VR headset.

The effect is magnificent right from the start, as the player finds themselves seated in a prison cart on their way to a rendezvous with a headsman’s axe. While the world may not have the visual fidelity of the PS4 and XB1 remasters – it looks roughly equivalent to the PS3 version – the developers have done a fantastic job of making the world feel like a real place. Everything is scaled to perfection, with towering mountains looming overhead and claustrophobia-inducing tunnels pushing in all around.

Switching to the quick-travel map pulls players thousands of feet into the sky, giving them a look at the scope of the world while triggering vertigo. Skyrim VR excels at making height-averse players feel wobbly-legged, with its high towers and cliffside paths genuinely conveying altitude like few other games manage. More than once I found myself needing to move to a seated position after staring too long over a ledge.

Skyrim VR makes movement incredibly comfortable for Move and standard controllers alike. While I’m usually wary of teleport-based locomotion, the developers have done a fantastic job of making it fit within the world. Players simply press the move button and an arc appears, letting them know where they’ll land once it’s released. Put the arc nearby and it will be mostly clear, or aim it farther and it will turn green to let the player know that they’ll be using stamina if they travel that far, since it’s the equivalent of sprinting. It’s simple to use, and allows ranged character builds to zip around the map without fear of getting trapped by geometry. The DualShock works exactly as it does in standard versions of the game, with one thumbstick handling movement and the other orientation. The only difference is that looking up and down, as well as fine aiming, are directly controlled by the player looking in whatever direction they choose. 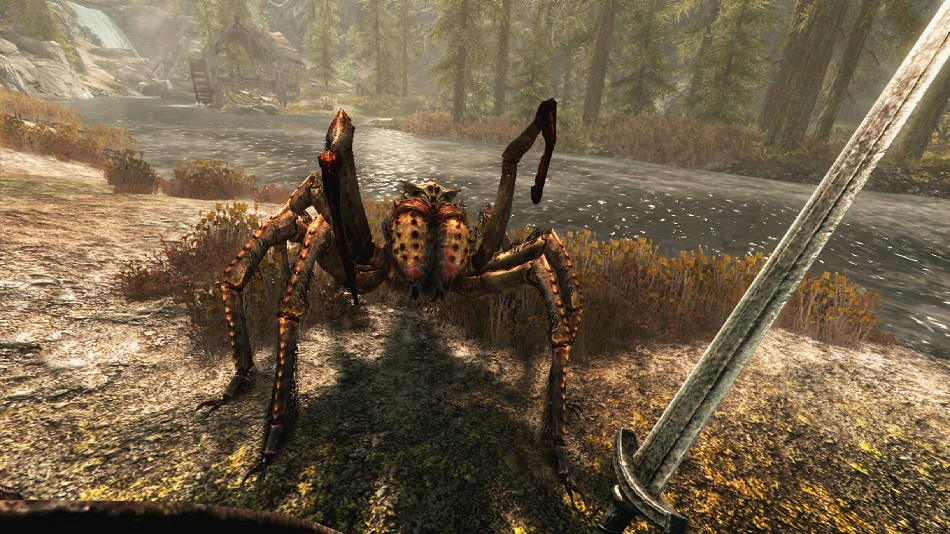 Combat is slightly uneven, in that each control scheme specializes in its own kind of battle. Players building their characters around ranged spells or archery absolutely must play the game with Move controllers. Skyrim VR simulates bow and arrow mechanics flawlessly, with the player nocking an arrow onto the string by holding a button down, manually aiming, and then releasing it to fire. With ten minutes of practice I was able to fire with startling accuracy, and was already wondering how I’d ever go back to using a controller for ranged combat.

The DualShock shines when it comes to melee builds, though. Enemies are universally agile, and combat always involves them weaving around and attempting to find an opening to attack. The Move controls just aren’t up to dealing with this. Teleporting around a small room while three zombies charge gets confusing in a hurry, and while blocking and attacking is done by the player actually swinging their arms, enemies aren’t sufficiently staggered or visibly wounded by attacks for it to feel natural. All of these problems go away with DualShock-based controls, which allow for movement and combat every bit as smooth as Skyrim has ever delivered.

While the enormous open world of Skyrim is impressive to explore and the always-smooth framerate ensures that immersion is never broken, the technical sacrifices which allow for that stability are noticeable from time to time. One of the great pleasures of the game is for players to see a huge edifice in the distance and experience the way it grows into a truly imposing structure as they approach it. However, problems arise when players are able to see the detailing on those structures – wooden ledges, decoration, doors – suddenly appearing as they draw close. This kind of pop-in never appears in dungeons which are much easier on the game’s engine, but they can be problematic in the overworld, where players will be spending most of their time.

For example, at one point I found myself being pelted with arrows, with no idea where they were coming from. Eventually I saw one fly at me from the opposite side of a ravine. The game’s engine was letting this distant bandit attack me, but because I was more than fifty in-game meters away, it wasn’t bothering to render him, even though the path he was on and the trees all around him were perfectly visible. It wasn’t until I crossed a bridge to the other side of the ravine that the culprit suddenly popped into view.

Even with this one shortcoming, Skyrim VR is a triumph. While I’m nowhere near completing the campaign, I haven’t found a single quest, threat, or objective that’s more difficult to deal with in VR than it was in the old Skyrim. It was already a wonderfully deep world to inhabit before players could freely explore it from within, and the developers have proven that a fully-featured action RPG can work just as well (or frequently better) in VR than it ever did on a flat screen. Rating: 8.5 out of 10

Disclosures: This game is developed and Published by Bethesda Softworks. It is currently available on PSVR. This copy of the game was obtained via publisher and reviewed on the PS4. Approximately  12 hours of play were devoted  to the single-player mode, and the game was not completed.  There are no multiplayer modes.

Parents: According to the ESRB, this game is rated M and contains Blood and Gore, Intense Violence, Sexual Themes, and Use of Alcohol.  Older teens at minimum, please. The game starts with a beheading and people being burned alive, and never gets any less brutal. Most of my time was spent firing arrows into enemies’ heads and then yanking them back out to avoid having to buy new ones. There’s plenty of sex in addition to the violence – while there’s no nudity, plenty of adult situations are implied and discussed. Also, in addition to the alcohol use, the game has plenty of drug use. Perhaps it wasn’t mentioned because they’re fantasy drugs?

Deaf & Hard of Hearing Gamers: The game is largely playable without sound on. I played for a few hours without audio and noticed no vital cues, although not being able to hear enemies approaching from off-camera led to a few nasty surprises. I suggest setting the combat to easy.

Remappable Controls: Yes, this game offers fully remappable controls on the DS4, but not on the Move controllers.