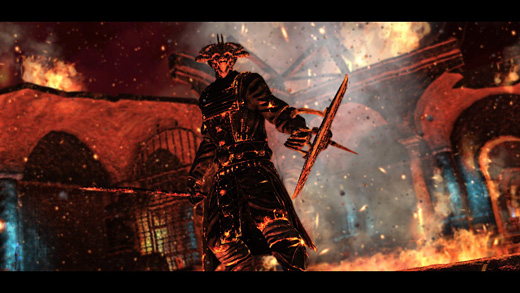 LOW One terrible boss fight is bad—but the exact same boss four times in a row?

As video games grow and expand as a medium, it becomes increasingly common to see developers attempt to explore messages a little more complex than "most problems can be solved by stabbing." With the current awareness of Middle-Eastern culture in the West, the Crusades have become a popular topic for developers looking to say something with their stories. The Cursed Crusade

is head and shoulders above the competition in this regard, surpassing both the bloody fan-fiction of Dante's Inferno and the didactic atheism of Assassin's Creed by presenting a straightforward examination of the motives behind and immediate moral compromises of the Crusades, and also offering a succinct indictment of fanaticism in all its forms.

…Oh, and there are demons beheading zombies, I mean, it is a video game, after all.

A co-op-friendly third-person swordfighting game, The Cursed Crusade tells the story of a Frenchman and a Spaniard traveling Europe and the Middle East searching for the former's father. Their quest takes them through more than twenty levels of unfortunately similar action, as they fight their way through castles, keeps, and strongholds, with an occasional detour to Hell along the way.

The Cursed Crusade's plot is—by far—its strongest point, although that's something of a backhanded compliment since the story is underdeveloped and disappointing. The main character is motivated by a desire to reclaim his family land from a corrupt relative, and his sidekick tags along because he's a thief and sees the Crusade as an opportunity to steal riches. Of course, they're acting as a microcosm for the greater forces at work, contrasting the ideological purity of the men devising the Crusade with the desire of seemingly everyone around them to turn a buck off the endeavour.

The game is strongest when presenting the gradual slide of the crusaders from holy warriors to thieving mercenaries. Sadly it loses this focus on history in the last third, moving more into the prosaic supernatural aspects of the tale (yet another fetch-quest to gather powerful holy relics) before finally stopping midway through the story. That's right, the game ends with a literal "to be continued"—there's not even an attempt to tie the game's arc up before moving on to the larger threat in the theoretical next title. When the unskippable credits roll, literally nothing has been resolved, which makes the hours spent playing it feel incredibly pointless.

The Cursed Crusade's combat also suffers from a number of problems which are heightened by the fact that swordfighting is literally all the game has to offer. 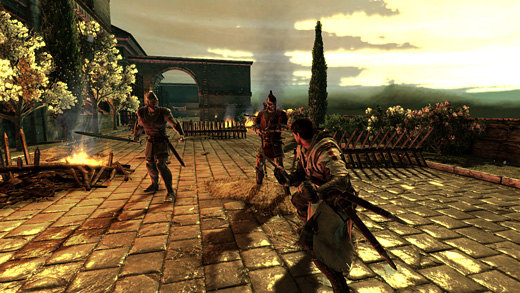 The basics work well enough—two attack buttons and a block/parry/guard break system keep the action plugging along, but an overcomplicated combo system really holds things back. In addition to upgrading stats, players are forced to unlock combos for every one of more than a dozen possible weapon combinations. If this were a matter of using the weapons and gradually learning their moves, it would be one thing—but players have to spend points earned by beating levels for the privilege of swinging a sword a fourth time, and since there's no way of predicting what kinds of weapons will be available on a given level, players can find themselves stuck using weapons they're unfamiliar with, unable to go back and earn more points, and unable to better prepare. Add that to the fact that the combos themselves are weirdly finicky, requiring far more precise timing than genre conventions demand, and The Cursed Crusade is left with core gameplay that is an inch away from being broken, and never as entertaining as it ought to be.

While The Cursed Crusade features a theoretically large number of locations, only the very beginning, which features (in quick succession) a foreboding medieval village, the siege of a castle, and a visit to a jousting tournament, has any real character. Once the "crusade" section of the game begins, the player is in for an interchangeable series of narrow streets and claustrophobic keeps. Keeping the game so focused on the street-level conflicts keeps the adventure from ever using its setting as well as it could. I'm not asking for giant conflicts—this isn't that kind of game—but would it have killed them to pull the camera back now and again so I could get some sense of the majesty of the buildings I'm only seeing tiny pieces of?

The one interesting development the game offers is a light world/dark world mechanic, which I would normally call hackneyed, were it not employed so well here.

With a simple tap of one button, the player is plunged into a demonic version of the level they're currently in, where the main characters are transformed into demons (the "curse" of the title), and their enemies as zombies. In addition to being visually interesting, this mode offers a massive gameplay advantage: in the real world, enemies wear armour that must be removed before their health can be damaged. In the dark world, however, players can attack their enemies' souls directly. Naturally, this makes short work of them.

Despite its novelty, even this high-quality feature isn't without its drawbacks. Not only can the player only stay inside the dark world a short time before dying, the visually impressive rendering of Hell doesn't change aesthetically from level to level—it makes already annoyingly similar levels look downright identical.

In addition to all of these major design problems, The Cursed Crusade

is simply fraught with niggling little bugs and questionable dynamics. Weapons appear and disappear seemingly at random, characters get stuck in the environment, a number of simple "press this button to activate" sequences go on five times as long as necessary… There's just a shocking amount of things on display that should have been caught during testing, and the result is a mess. Even with all these problems, however, I found the plot interesting enough that I'm definitely hooked. If by some miracle there is a The Cursed Crusade 2, I'd be interested in seeing the story wrapped up as long as this title's wealth of problems are fixed. Rating: 4.0 out of 10.


Disclosures: This game was obtained via publisher and reviewed on the Xbox 360. Approximately 15 hours of play was devoted to single-player modes (completed 2 times) and 2 hours of play in multiplayer modes.

Parents: According to the ESRB, this game contains intense violence, blood and gore. Parents will want to steer their children clear of this one. While they might actually learn something interesting about history from it, there are far too many graphic beheadings for it to count as safe educational software. Absolutely no sexual or other prurient content, though, so there's something in its favor!

Deaf & Hard of Hearing: You should have no real trouble with the game. All the dialogue is subtitled, and there's only a single audio cue—but even it only involves the location of a collectible item, and the entire game can be played easily with the sound off.