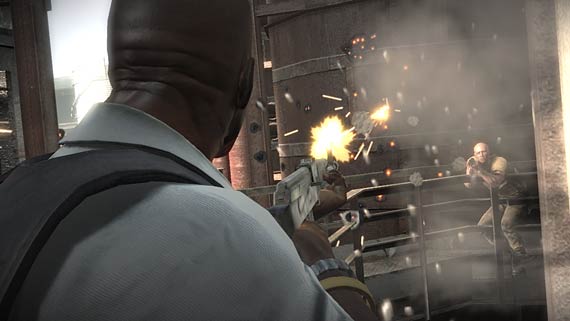 Experiments are a necessary part of the development of game design. If some industrious soul hadn't invented the life bar and health pack, we'd be stuck with one-hit death. And if another, even more industrious soul hadn't invented progressive health, we'd still be stuck with the life bar and health pack. Of course, not every experiment is a positive one, and not every change is for the better. The Club is a perfect demonstration of that concept.

A third person shooter that attempts to meld violent gunplay with racing-style lap running and time trials, The Club is set in a world where tough guys gun down hundreds of random thugs for the amusement of millionaires the world over. Players control one of the tough guys, who enter themselves in murderous tournaments for reasons that aren't ever entirely clear.

If nothing else works for The Club, at least the shooting is good. There's always an aiming reticle onscreen, so it's easy to make accurate shots even when on the move, which is vital to the game's central mechanic—a shooting combo system which rewards players with a score for each person they kill based on a number of factors, such as distance, hit location, and number of enemies killed in a row. There's definitely some fun to be had there, in a retro-arcade sort of way. The game encourages the player to try levels over and over again, asking them to beat them just a little faster, shoot a few more people in the head, and move their score up to the next level.

It works just fine in isolated instances, a level here or a level there, but the second the game tries to add any kind of structure to all this, it falls apart. The single player mode is arranged into tournaments, which must be played to unlock all of the game's levels and characters. Each tournament is set in one of eight large locations, which is broken down into paths and areas for each 'event'. Unfortunately, a few key design decision keep the whole from working. 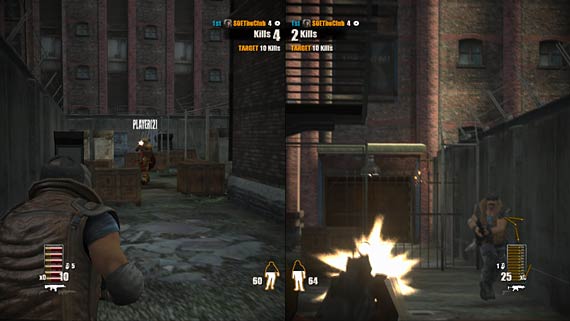 Despite the game's best intentions, all of these problems flow from the scoring system at its core. The first is that in each tournament the player only ever gets to shoot random, generic opponents, never the other contestants in 'The Club'. The player's ranking in the tournament is judged by points awarded for the score achieved in each level. Ten for first place, eight for second, etc. Theoretically this should mean that the player could win the tournament on points without actually winning every single level. Like many racing games, though, there's no randomness to the computer-controlled players. Each tournament has a designated 'winner', who always scores highest in every event. This means that rather than giving the impression of competing against other characters, the player is just fighting an arbitrary score, the way every race in Gran Turismo is more of a time trial than a real competition.

The scoring system also has the unfortunate effect of to making every level feel exactly the same. There are nominally five different types of levels, but in reality there are only two: hold a location for a certain amount of time, or run for the exit as fast as possible. Out of the game's sixty-odd events, sixteen are about holding a location while enemies rush at it, meaning that the majority of the time will be spent running for an exit at high speed, killing everyone along the way.

Okay, technically only one of the 'run' types of levels actually comes with a ticking clock, and the rest could theoretically be taken at a careful, measured pace, with the player using cover and taking their time. Of course, no one would ever play the game this way. The player's success is judged only on their score, and the only way to get a good score is to keep the combo meter high, and the only way to keep the combo meter high is to constantly kill enemies, who are arranged in static locations leading towards the exit. No matter which mode is being played, the game's own internal logic strips it of its uniqueness, rendering every level essentially the same experience.

It also seems as if knowing that the game had such a quick pace allowed the developers to get lazy when it came to enemy AI as well. In that they have almost none, opting to stand around waiting for the player to show up so they can be shot to death. For all the difficulty I had in shooting them, it might as well have been a game about running through an obstacle course, blasting paper targets. Worse still, there just isn't enough variety in the enemies to last the length of the game. In addition to regular guys with guns, there are shield-carrying foes, snipers, sappers, and the occasional gatling-gun thug. No bosses, no clever enemies, no changes past the first four tournaments. Which renders the last four tournaments a repetitive slog. 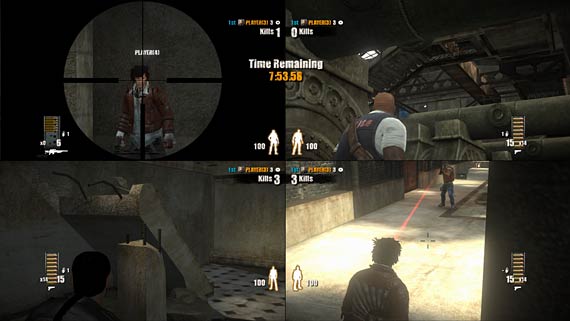 I'm sure the levels are well designed and attractively rendered, but I can't say I ever noticed. After all, when I'm charging through a series of rooms, pausing only long enough to shoot people in the head before sprinting to the next room, wallpaper choices and furniture models don't really catch my attention. Again, this goes to The Club's racing roots. A track's background scenery is the absolute least important part of a game—really, anything that would serve to distract the player from the upcoming curves is a waste.

There isn't even any kind of a story to tie the whole thing together. Well, that's not exactly true. Based on the elaborate character designs and the fifteen second wrapups that occur whenever a tournament is beaten, clearly a whole lot of thought went into the game's backstory. It's just that none of it made it into the game. The player can choose from eight different characters, but since only the slimmest glimpse into those characters' histories and motivations are offered, there can be no satisfaction when they win, or disappointment when they lose. By playing only against generic thugs, and never the other contestants, there's never any tension, or hint of a rivalry, or suggestion that players in the club have ever met one another. I was always playing against a number rather than a person, so choosing a character to use was as arbitrary as choosing a car to race with. Just pick the one that looks best and then don't worry about it. Not exactly the best way to draw players into the game's world.

The Club's greatest flaw is that it thinks it's a whole lot more revolutionary than it actually is. Despite the game's claims to the contrary, there's nothing new about any of this. Grading shots for score is old as the hills, and even Max Payne had a mode where levels had to be completed within a certain time, and killing opponents rewarded players with precious seconds. That's the central problem here. The utter lack of a story, the completely generic nature of the enemies, the focus on repetition—they make the whole game feel like the kind of bonus game that gets unlocked after a real game has been completed. Frankly, if this were a particularly extensive set of time trials and challenges that I could go back to after playing the real game, I would be ecstatic. As a complete product, though, it's just too shallow and repetitive to be any good. Rating: 5.5 out of 10

Well without this turning into a slinging match or debate on journalistic standards, I think the comments that Daniel makes at the end of the article, which weigh up the merits of the game within the context of the game, are more insightful and intellectual than the first paragraph which takes a much more general view and is weakened because of it. It’s a pity the reader has to wade through the entire review to reach what I think is the best part of Daniel’s writing.

He’s trying to set up some context, yeah? The whole idea is to lead in with some intellectual context to the point he’s making, rather than just rail out some basic game review. At the end, though, he’s trying to wrap it up.