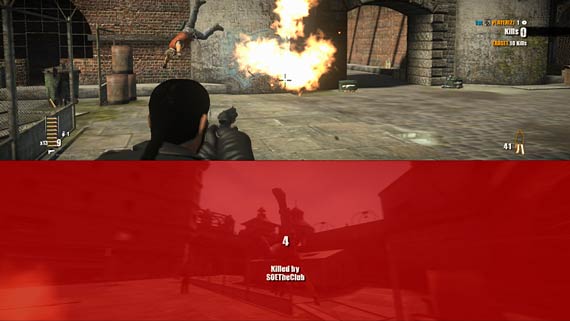 Parents should just keep their children as far away from this one as possible. It's extremely bloody violence without motive, context, or consequence. Sometimes violence can teach valuable lessons about morality and political theory, and sometimes it's just a geek show watching the blood splatter on walls. This game falls neatly into the second category.

Multiplayer gamers should have a good time with this one. All of the standard deathmatching and teamplay modes are here, along with a couple of co-options the allow players to help each other fight the computer. There's nothing special, but it's decent as third-person online shooting goes.

Deaf and Hard of Hearing gamers are going to have problems with the game. In addition to the normal issues with figuring out what direction bullets are coming from, the game's announcer pops in now and again to give information about what's going on in a particular event. These notes are usually subtitled on the screen, but you'll be so busy racing through the levels that it's easy to miss the text, and you'll find the game considerably more frustrating as a result.