Sketching out a solution 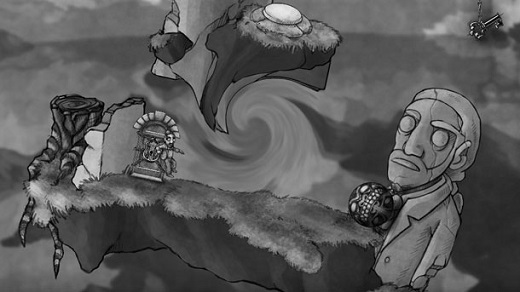 HIGH Using the gravity of a timed black whole to speed me towards a key.

LOW Crawling to the internet for help with that last puzzle.

WTF Wait, how many times do I have to get to the door?

It's not surprising that game developers find inspiration in the works of MC Escher—mapping the geography of impossible spaces is a level designer's job, after all. With his omniscient angles, mysterious forms and draftsman's eye for beautiful stone architecture, Escher has inspired more game design decisions than any other artist with the possible exception of James Cameron. At this point it would be strange to see a fantasy or dream sequence in a game that didn't give a nod to his endless staircases and recursive hallways in one way or another. So, The Bridge is in good company when it comes to its inspiration, but it stands apart as being the best translation of Escher's magical physics to an interactive space.

The Bridge starts with a simple challenge: help a man explore a house. This is complicated by the fact that every room contains multiple doors leading to strange dreamscapes that the player must escape by any means necessary. The tools at the player's disposal? In addition to making the man walk back and forth, they can exert complete control over the world's center of gravity.

One of The Bridge's most impressive traits is how comfortable it is establishing rules and then consistently working within those rules to create its puzzles. This is not a game that needs to constantly throw bizarre new complications and dangers at the player—by the end of the first few worlds, it's demonstrated every twist it has to offer. Locked doors, evil rolling balls, gravitational singularities that suck the player up and force them to hit the rewind button… all potential threats are clearly established early on.

What makes The Bridge so special is how adroitly these things are constantly reshuffled to create fascinating combinations. In one area, the player must spin the screen around until up is down and their avatar is walking across the ceiling. Another level might see the player tilting the world 90 degrees in order to dive past a black hole, while yet another has them endlessly spinning the screen to keep the man running one step ahead of rolling death.

By gradually introducing these elements (and more) one at a time, The Bridge teaches players as they go, preparing them for the ever-deepening intricacies they'll be up against. That's not to say that the puzzles are a snap, though. While I was able to struggle my way through most of the challenges, I did find myself driven to the Internet more than once. The Bridge is never unfair though, and even when I cheated and looked up the solution, I'd wind up slapping myself in the head after I realized that the answer was staring me right in the face. That's good puzzle design, even if it did knock my self-esteem down a peg.

With its perfectly-realized art style and a wide variety of puzzles that never break its themes, The Bridge takes its inspiration and runs an impressive distance with it. The developer has produced a charming, inventive, and only occasionally aggravating puzzle experience that I hope Escher would feel honored by. Rating: 9 out of 10


Disclosures: This game was obtained via publisher and reviewed on the Xbox One. Approximately 10 hours of play was devoted to single-player modes, and the game was completed.

Parents: According to the ESRB, this game contains no objectionable content. Let your kids go nuts with this one. Not only is it completely safe from a gameplay content standpoint, it has the exact types of puzzles you should be encouraging to help develop young minds.

Deaf & Hard of Hearing: You'll be fine with this one—no audio cues, and all story is displayed in text!